Essay from the author of The Taboos of Leadership

Today we're happy to host an essay by Dr. Anthony F. Smith, author of The Taboos of Leadership, a book that "reveals the rarely discussed realities of leadership--the secrets that leaders just cannot admit to publicly for fear of losing power, self-respect, or even their jobs.

Today we're happy to host an essay by Dr. Anthony F. Smith, author of The Taboos of Leadership, a book that "reveals the rarely discussed realities of leadership--the secrets that leaders just cannot admit to publicly for fear of losing power, self-respect, or even their jobs." Thank you, Anthony! Leadership - The One and Only Path to Becoming a Leader People have paid me a lot of money over the years to answer the following question for them: How do I become a great Leader? I will often answer them with the following questions: Q: How do you become a great parent? A: Do great parenting, day in, day out, over a sustained period of time. Q: How do you become a great consultant? A: Do great consulting, day in, day out, etc. So, how do you become a great Leader? You guessed it, do great Leadership, day in, day out, over a sustained period of time! The field of Leadership Development, with its plethora of books, seminars, courses, videos, and executive coaches, has become a billion dollar industry. Unfortunately, I believe that much of what is embodied within the industry is simply misleading and deceptive. Books such as 'Leadership for Dummies', 'The Idiots Guide to Leading', and 'Leadership Made Easy', all capitalize on the fact that many want to be a leader, but few are actually able, or want to put forth the effort required to really become one. (How would you feel about a book entitled "Brain Surgery for Dummies"?) At one point, we need to get real about leadership. Like diet programs that claim you can eat all you want and still lose 20 pounds in a week, leadership "products", make similar claims, and therefore resort to oversimplified theories and falsehoods that invite leader want-to-be's to consume anything that looks like a magic pill to Leadership. Well, unfortunately, there are no magic pills to becoming a Leader, just like there are no magic pills to losing weight, getting fit, making a million dollars, or shaving 10 strokes off your handicap in golf. Simply stated, becoming a Leader occurs when one exercises the arduous process of effective Leadership, day after day, week after week, and year after year. Q: So, what is Leadership you ask? A: Leadership is a process (not a position) whereby an individual works through a series of iterative stages by;

Stage 1 * creating a vision, * establishing an objective and set of goals, * setting direction, Stage 2 * and following through by intentionally seeking to influence followers (both established and potential), * to perform the various tasks needed to realize the vision, * to their full potential, * for as long as possible, Stage 3 * until the vision and goals are realized.

One can look at this definition as a "check-list" to Leadership; Do I have a vision; a picture of a desired end state that is compelling to others? Are people performing to their full potential? Who do I need to help me realize this vision? Am I intentionally seeking to influence people to perform their best? What else needs to be done, and who should do it? Now, I realize individuals may find themselves at various points in a given stage, before they choose to engage in the process of leadership. For instance, one may be working in a division, or an organization, that already has a clearly established vision, set goals, etc. In such a case, assuming that the individual agrees with the vision, the leadership process begins at Stage 2. We all must realize that part of the difficulty of leadership is that some people are great visionaries, but lack the competence and EQ to influence others to rally around their vision. Others, may not be great visionaries, but are very influential and inspirational to those around them. What I have observed in my years of studying leaders, is that very few have all the gifts and talents themselves; what many of the great ones do have, is a self awareness of what talents they do have, and the self confidence and security to surround themselves with others who can compliment them, and compensate for their own lack of skills. In closing, let me make one point clear; it is my intent to encourage as many people as possible to exercise leadership as often as they possibly can, for as long as they can! When people are lost because they lack a "vision", and you happen to "see" an end goal that they can not see, then at least exercise Stage 1 of leadership. By doing so, it doesn't necessarily mean you will emerge as their "leader", but you will have engaged in "leadership." If one of your colleagues is not performing to their "full potential", intervene and intentionally try to influence them to raise their performance. Remember, human performance is nothing more than the function of one's skill and will to perform a task; therefore, if one is not performing to their potential, it is either because they lack the skill, or the will, to do their job. Figure out what is impeding their performance and try to either coach them to build their skills, or inspire, challenge, and motivate them to raise their will to perform. Let's be clear; Everyone can not become a leader, but every one can engage in a lot more leadership! When I wrote my book, The Taboos of Leadership; The Ten Secrets That No One Will Tell You About Leaders and What They Really Think (Jossey Bass, 2007), I was accused by some that by "revealing" the un-savory aspects of leadership, I was discouraging many from wanting to lead. Unfortunately, they missed my message. As I state in my book, if we are serious about trying to build the Skill and Will of future leaders, we owe it to them to disclose the truth, as difficult as they may be, so that they may be better prepared to engage in leadership, day in, and day out, over a sustained period of time, thus increasing the probability that one day they will indeed become great leaders themselves. Leadership is the one and only path to becoming a leader. 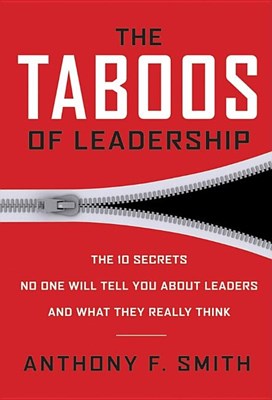 The Taboos of Leadership: The 10 Secrets No One Will Tell You about Leaders and What They Really Think