Excerpt from Leadership and the Sexes

The following excerpt is taken from Chapter 1 of Leadership and the Sexes: Using Gender Science To Create Success In Business by Michael Gurian and Barbara Annis. In this new book, Leadership and the Sexes gender experts Michael Gurian and Barbara Annis show what the latest scientific studies reveal about male/female brain differences, and explain how these differences impact the ways that men and women negotiate, communicate, lead, and run meetings. Chapter 1: Understanding the Science of Gender Human evolution has created two different types of brains (male and female) designed for equally intelligent behavior.

The following excerpt is taken from Chapter 1 of Leadership and the Sexes: Using Gender Science To Create Success In Business by Michael Gurian and Barbara Annis. In this new book, Leadership and the Sexes gender experts Michael Gurian and Barbara Annis show what the latest scientific studies reveal about male/female brain differences, and explain how these differences impact the ways that men and women negotiate, communicate, lead, and run meetings.

Chapter 1: Understanding the Science of Gender

It can be difficult today to talk completely and honestly about how men and women feel at work. Respectful humor is often helpful. A number of years ago, a story began to circulate on the Internet. Some people thought it began with Stephen R. Covey, though no one knows for sure. It is a fictional transmission between a U.S. Navy aircraft carrier and Canadian authorities that provides us in the gender world with a humorous metaphor for beginning a dialogue. We get a special chuckle from this story because Barbara is Canadian and Michael is American--but the story could involve any countries and any cultures.

A lighthouse and a ship--they both have something essential to offer. At first, neither one understands what the other one is. Once they understand, perspectives change. Is the lighthouse one gender and the ship another? No. For our purposes, the lighthouse represents human nature (gender), and the moving ship represents cultural shifts in use of gender (gender roles). In the science-based paradigm, gender comprises the male/female characteristics we are born with and the context in which we receive our early nurturing; gender roles are the roles that our society and we ourselves decide we should fulfill as women and men. In this model, the lighthouse is "hard-wired"--it's been there a long time. The ship can't deny the lighthouse exists, nor change the "course" of the lighthouse--and, perhaps most important, it needs the light shining from the lighthouse to help chart its safe course. Though the ship initially feels threatened by the presence of the lighthouse (not knowing what it is), once it learns the character and value of this other presence, it can in fact navigate more safely. The moving ship is the "soft-wired," changing part of the gender equation. The ship represents the gender roles we each bring to the workplace. These can change from generation to generation and from person to person. When the ship doesn't have all the information the lighthouse possesses, our sense of gender roles, as individuals and a society, will often limit either women or men, increase gender stereotypes, misrepresent who we are as individuals, and lead to confusion, fear, and, ultimately, anger and anguish. When, however, the ship acquires crucial information about human nature--gender--it realizes the lighthouse is there, and it can more safely and more effectively navigate gender roles, gender issues, executive team development and trust, individual and personal concerns between women and men, and the whole workplace culture. Did You Know? Gender Experiments Surprise Even the Experts In the 1990s, the Canadian Broadcasting Corporation (CBC) created a short film that recorded an experiment in leadership styles between women and men. CBC didn't tell the participants the objective of the work they would do that day; the director simply divided the male and female leaders into two teams, and gave those team leaders the same instructions: build an adventure camp. The teams were set up in a somewhat militaristic style at first, including team members wearing uniforms, but also with the caveat in place that the teams could alter their style and method as they wished, as long as they met the outcome in time. Leader one immediately created a rank-and-file hierarchy and gave orders, even going so far as to assert authority by challenging members on whether they had polished their shoes. Leader two did not have the "troops" line up and be inspected, but instead met with the other team members in a circle, asking, "How are we doing? Are we ready?" "Anything else we should do?" "Do you think they'll test us on whether we've polished our shoes?" Instead of giving orders, leader two was touching team members on the arm to reassure them. As part of the program, CBC arranged for corporate commentators to watch the teams prepare. Initially, the commentators (mostly men) were not impressed by the leadership style of leader two; the second team wasn't under control, members weren't lined up, and they lacked order (or so it seemed). The commentators predicted that team two would not successfully complete the task. Yet when the project was completed, team two had built an impressive adventure camp, as good as team one's, with some aspects that were judged even better. When debriefing their observations, the commentators noticed that when team one was building the structures for their camp, there had been discord regarding who stood in charge and who had completed which job and who hadn't. Team one showed a lack of communication during the process of completion that created problems (for example, "Wasn't someone else supposed to do this?"). Team two, on the other hand, took longer to do certain things, but because of its emphasis on communication and collaboration during the building and enactment of the task (such as "Let's try this" and "What do you think about that?"), the team met the goal of building the adventure camp in its own positive way, and on time.

Which leader do you think was a man, and which one a woman? You probably saw the answer coming--the woman was leader two. The commentators who watched this experiment certainly knew about authentic leadership, different management styles, and the idea of diversity. But they weren't quite ready for the female leader to succeed so completely with her "nonmale" leadership style. They were--as many organizations' succession planning committees can be--unconsciously (and consciously) thinking the woman "just doesn't act like a leader," "just doesn't have things under control," "won't meet deadline," "is run by her staff." The committee may know she gets results, and it may even have her name on a short list, but the members can't quite get their heads around the fact that a woman's authentic leadership style doesn't need to look like a man's authentic leadership style. The CBC experiment is just one ray of light coming from the lighthouse. The light being sent out into the world from experiments like this illuminates the differences between the male and female brain at work, especially in leadership roles. Although of course anything can happen in a social experiment that is being filmed--and in all the gender-related science we explore in this book, you'll be able to think of "exceptions to the rule" (you'll learn, in fact, about women and men who are actually hard-wired toward the middle of the gender/brain spectrum--that is, they have higher-than-average amounts of the other gender's brain characteristics)--at the same time, wherever you travel in the world, you will find that female leaders often share certain traits that are different from male leaders. Let's explore the biology of this difference, for it crosses all cultures, and it is fascinating!

Low plasticity does not mean there won't be cultural effects on your brain/gender genetics. For instance, you can certainly train boys to not cry and end up stifling their tears, and you can encourage boys to cry and girls not to and end up stifling girls' tears. But the changes won't change the children's brains from male to female and vice versa. That's the crux of what we've discovered scientifically in the last thirty years. Your individual genetics can include aspects that don't fit the male and female on your gender/brain spectrum analysis--you could be a man who cries a lot, for instance, or a woman who cries not at all--but when you look at yourself comprehensively from a gender lens, you'll most probably see that you are male or female. What is the bottom line on all this? The brain is quite adaptable, but in areas of personality and gender it is also hard-wired. Even a boy brought up only by women or a girl brought up only by men will find that although he or she has been affected in certain ways through these life circumstances, he or she is still boy or girl, man or woman. One celebrity example of this that corporate audiences often find compelling is that of football players (or other athletic stars) like Bo Jackson, who talk in interviews about being brought up without significant men in their lives--that is, by a single mom and by other women--but who obviously have low plasticity of the male brain. Male athletes like Jackson who were nurtured mainly by women and ended up high-testosterone, high-muscle-mass, very spatial-kinesthetic, using fewer words than most women are very much male on the gender/brain spectrum. As you move farther into this material, your internal frame as a leader (both a woman and a man) may well shift toward a next-stage and revolutionary understanding of gender and leadership. Along the way, we hope you'll find that discovering where you fit on the gender/brain spectrum feels like discovering a treasure: a liberating (albeit complex) part of who you are. 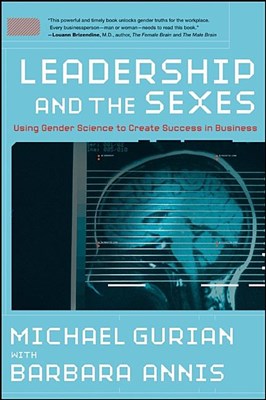 Leadership and the Sexes: Using Gender Science to Create Success in Business