Four Cornerstones of Distinction by Scott McKain It all begins with a simple question:"How can our customers and prospects tell the difference between us and our competition? " Here's what I find absolutely amazing -- the most prevalent answer I hear from highly successful and sophisticated marketing leaders in a wide array of industries is: "I don't know. " Distinction is like a vaccine for your organization.

It all begins with a simple question:"How can our customers and prospects tell the difference between us and our competition?" Here's what I find absolutely amazing -- the most prevalent answer I hear from highly successful and sophisticated marketing leaders in a wide array of industries is: "I don't know."

Distinction is like a vaccine for your organization. If you don't know what distinguishes you from your competitor -- or, if the answer is "price" - then I believe that you are probably doomed, in the long run.

In one of my earlier books, I described the fortunate set of circumstances that enabled me to play the role of the villain in a highly-regarded German movie, "Stroszek" by the esteemed director, Werner Herzog. This marvelous event in my life later afforded me another unlikely opportunity -- to become a film critic, with my commentaries syndicated across the U.S. and around the world.
Several years ago, I attended a reception in Hollywood, and had the occasion to meet the best in the business, Roger Ebert. To my delight and surprise, the famed critic remembered the terrific review he gave my solitary attempt at acting. Roger asked me to sit with him and his wife, and we began a warm and fascinating conversation.

Roger asked me, "Scott, how many movies are you normally seeing in any given week?" My answer was that the usual total was one - the film I would be reviewing for that week's broadcast. He responded, "Many of the people in this profession are seeing one or two movies a day! The little off-beat, quirky, odd, foreign or independent film captures our attention because they are a bit different! When you are overwhelmed with such boring similarity, you begin to perceive that 'different' IS 'better'!

The remarkable Pulitzer Prize winning journalist and critic taught me a great lesson I now call "The Ebert Effect": When someone, from their perspective, is inundated with indistinguishable choices, they perceive a product, service, approach, or experience that possesses a specific point of differentiation to be superior.

Because this effect means that different is perceived to be better, we must realize that there are four steps -- I call them the "Four Cornerstones of Distinction" -- that create what every organization, and professional, needs in today's volatile economy.

The first Cornerstone is Clarity. To grab attention and guarantee satisfaction, you have to be precise about who and what you are. You cannot differentiate what you cannot define.

The second Cornerstone is Creativity. Distinctive organizations find some unique twist, some original spin to put on the interaction that they have with customers.

The third of the Cornerstones is Communication. And, while we often hear about the importance of that topic, what our research clearly shows is that today's customer wants to be engaged by a compelling narrative. Tell the story of your product, your company, and your service in a manner that involves customers and prospects.

The final Cornerstone is Customer-Experience Focus. This more than the old "focus on the customer" line we've heard for years. Today's customer centers purchase decisions as much on feelings as facts and figures. In other words, how they feel about your marketing -- and the experience and emotional connectivity they have with your organization and people -- are the primary determinates of what they will buy and refer.

The easiest tactic for you is simply to continue what you are currently doing. Let me emphatically state my belief that this is also the most dangerous approach.

Because of the Three Destroyers of Differentiation discussed in the previous post, your job - organizationally and individually - is only going to continue to grow in difficulty. However, if you begin today to chart a fresh approach based upon the Four Cornerstones of Distinction, you can begin to enhance your organization -- while you nurture and grow yourself.

Check out Collapse of Distinction: Stand Out and Move Up While Your Competition Fails by Scott McKain (Thomas Nelson, March 2009) 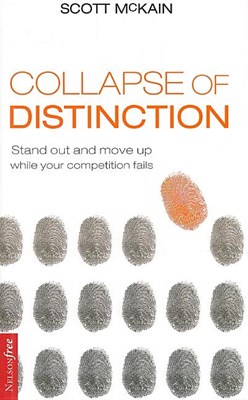 The Collapse of Distinction: Stand Out and Move Up While Your Competition Fails