While Dylan is relaxing on his honeymoon in Costa Rica, I'm going to take a stab at my version of Friday Links. Enjoy! There has been a lot of talk both online and around the water cooler about the New York Times article "Amazon Signs Up Authors, Writing Publishers Out of Deal" published earlier this week that made the bold statement: Amazon.

While Dylan is relaxing on his honeymoon in Costa Rica, I'm going to take a stab at my version of Friday Links. Enjoy! There has been a lot of talk both online and around the water cooler about the New York Times article "Amazon Signs Up Authors, Writing Publishers Out of Deal" published earlier this week that made the bold statement:

Amazon.com has taught readers that they do not need bookstores. Now it is encouraging writers to cast aside their publishers.

The author, David Streitfeld, goes on to detail the moves Amazon has made to establish itself as a competitor to more traditional publishers which, right or wrong, are made to seem submissive in the face of Amazon's emergence, depicted here quite colorfully with references to fear, confusion, and anger. Amazon, in turn, sounds nearly benevolent to authors and their struggles to get published. Needless to say, the article has sparked some strong opinions. Here are two of them: Friend of company and all-around-smart-publishing-person, John Eklund, a rep for Harvard University Press, The MIT Press, and Yale University Press, takes issue less with the article itself, than with the assertion made by "a top Amazon executive" that "The only really necessary people in the publishing process now are the writer and the reader." In his Paper Over Board blog post, who needs editors? writers, Eklund counters:

[N]obody- or precious few anyway- has written a book worth reading on their own. Someone taught you to write, someone took care of the kids and the bills while you wrote, perhaps someone even gave you ideas. And once an editor recognized quality and meaning in your work, and persuaded her house to take a chance on you, a complicated publishing apparatus improved on your creation. That's not always how it works. And one solution might be more publishers, not fewer. But as a reader, I'll continue to buy books that have been brought to market by experienced professionals with a publishing legacy, and will be wary of books that make a virtue out of scorning them.

The AARdvark blog, "created by the AAR Digital Rights Committee to educate the membership on all aspects of and issues surrounding the emerging digital publishing marketplace" takes on the article itself, in a post titled, Really, New York Times??, asking readers not to just find it either 'yesterday's news' or even revealing an uncomfortable truth, but to feel some "rage" over it.

Monday's New York Times front page article on Amazon's "writing publishers out of the deal" has been much commented-on. But I think it calls for some rage. As someone who really cares about this industry, the simplistic and narrow focus is infuriating; and the message it conveys to people outside the business is misleading at best and damaging at worst. I would have expected more insight and at least some analysis from 'the newspaper paper of record.'

Author, Brian DeFlore, whose vitae provides ample evidence of this knowledge of the subject, takes offense at the tone of the article which, as he reads it, paints Amazon in a most favorable light.

And yes, it is sexy to think of Amazon as the great democratizer, and the Times uses that for effect. But of course Amazon could swat any publisher out of existence with a flick of its mighty wrist. If there is a Goliath, it ain't the publishers. You'd think the Times would address that.

No doubt the evolution of the publishing industry will continue to stir up great passion, and it is impossible to predict just how it will all shake out. Look at the evolution of the music business: it still hasn't ceased to change. But we can take solace in the fact that there is indeed such passion over our passion for reading. *** On November 3rd, the winner of the 2011 Financial Times and Goldman Sachs Business Book of the Year Award will be announced. The Financial Times has posted a number of videos to their YouTube channel of business leaders discussing great business books. Cynthia Carroll, CEO of Anglo American, talks about Michael Porter's On Competition Pete Redfern, Chief Executive of Taylor Wimpey makes an unconventional pick, Red Plenty by Francis Spufford. Samir Brikho, Chief Executive, Amec, explains how he uses Eliyahu M Goldratt and Jeff Cox's The Goal in his organization. *** In our The 100 Best Business Books of All Time, Jack chose Personal History by Katharine Graham as one of his favorite biographies. Graham ran the Washington Post Company from 1963-1991, an amazingly long time for any business person to helm a company.

But her success was not without struggle. Throughout her tenure as publisher, she had problems garnering the respect of her peers and subordinates, and, in this book, she discusses her struggles with trusting her own instincts. But it is indeed her obvious success as a leader and as a moral icon that makes this book essential reading.

This book came to mind this week when I watched this story on CBS News about Jill Abramson who has been named the new Executive Editor of the New York Times. She will have an incredible challenge in the coming years to intertwine the paper and digital visions of the paper. And, of course, the challenge of being a woman in the top newspaper job. About this, Abramson says:

"I'm very conscious of the past battles that woman journalists waged to rise up in the newsroom, and that happened here at the Times, too," Abramson said. "It would be nice to think we would get to the point where it wasn't so remarkable when a woman rose to the top job at an important institution. But we aren't there yet."

Indeed. But both Graham and Abramson have helped advance the process.

The Goal: A Process of Ongoing Improvement (Anniversary) 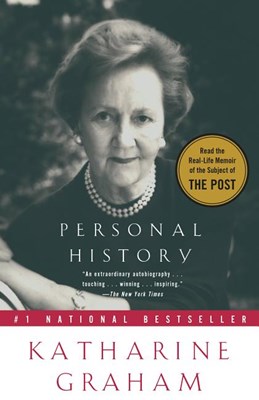