I'll See That and Raise You

I'll See That and Raise You BY FRANCES COLE JONES Every New Year's Eve I make a practice of choosing a slogan that embodies my attitude for the year ahead. A few years ago that slogan was, "Don't Ask Permission." The thought behind it was that we shouldn't wait for people to tell us we're good enough, creative enough, educated enough, smart enough. We need to decide these things and then demonstrate that they are true—we are the only person whose permission is needed to become our best self. This past year I chose, "I'll see that and raise you." As many of you know, this is a phrase used in poker when you're willing to take your bet to the next level. Little did I know when I picked it how often I would return to it as a rallying cry, for 2009 has been a year riddled with health issues, bizarre betrayals, and the unexpected deaths of several of my most dearly beloved. It seems the universe took me at my word. As I write, I'm thinking many of you had a similar year: a roller coaster ride composed not of breathless anticipation interspersed with high-energy delight but of low-grade dread interspersed with adrenaline-surging fear. And I don't know how you approached your unexpected, unwanted challenges, but I can tell you my frequent fallback positions were resentment, sadness, anger, shock, distress, confusion, fear... The hodgepodge of what it means to be human. I also don't know what techniques you employed when you found yourself in the grip of these emotions; what I found critical to handling these situations with a modicum of grace was the wholesale indulgence of my resentment, anger, shock, confusion... Yes, you read that correctly. When I felt them I did more than acknowledge them: I indulged them, wallowed in them, asked them to move in and redecorate. Why? Because I discovered this was the fastest way to get them to leave. Here's what I got the idea: Jalalud'din Rumi says,

This being human is a guest house Every morning a new arrival. A joy, a depression, a meanness, some momentary awareness comes as an unexpected visitor. Welcome and entertain them all! Even if they are a crowd of sorrows, who violently sweep your house empty of its furniture, still treat each guest honorably. He may be clearing you out for some new delight.

I found this true: attempting to keep these feelings at bay only meant they crept up on me at inopportune moments. Choosing to name them, invite them in, allow myself to feel them, meant they moved in, and moved on, far more quickly. The other critical element was accepting on a visceral level that feelings aren't facts. Just because I was feeling something didn't make it so. I needed to look at the data. Additionally, I came to understand that feelings weren't green lights. Feeling something also didn't mean needing to do something. Most of the time, the most effective thing I could do was to breathe in and out, then change my focus. So while I haven't yet decided, "Breathe in, breathe out, change focus," is the slogan for 2010, it's certainly on the table. Because I see that and raise you. 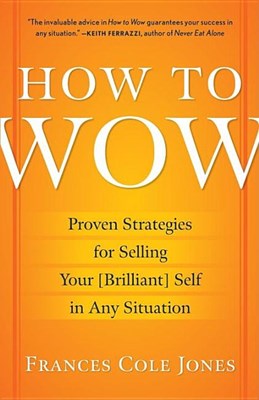 How to Wow: Proven Strategies for Selling Your [brilliant] Self in Any Situation