Occasionally, each of us can say we have good ideas. But how often do we act on them, and were they in fact really good ideas? Young entrepreneur and best-selling business author Peter Sheahan's new book, Making It Happen: Turning Good Ideas Into Great Results addresses those very questions.

Occasionally, each of us can say we have good ideas. But how often do we act on them, and were they in fact really good ideas? Young entrepreneur and best-selling business author Peter Sheahan's new book, Making It Happen: Turning Good Ideas Into Great Results addresses those very questions.

As Sheahan explains, there are many forces at work that will enhance or obstruct our idea, not only from working, but also from even getting out of our heads, and entrepreneurs need to consider these things in order for their ideas to be as successful as possible. And Sheahan walks the talk. By 30 he had founded two international mulitmillion dollar consulting practices with clients like Google, BMW, and Goldman Sachs. After reading the book, I sent Peter a few questions, and his answers are an enlightening glimpse into what's fully covered in the book. Check it out: What's an early sign that a good idea won't be a good business? When it is all about the founder. Seriously, people get so enamored with their own ideas that you just know they will be inflexible with the market. It is a fine line between being passionate, and being blinded by your personal aspiration. The very first thing I look for, and suggest the early stage entrepreneur work towards is a clearly defined offer. In other words, what exactly are you selling? Where does it fit? What value does it bring? This can be a challenging process for the entrepreneur, and often they avoid it out of fear of rejection. As long as your idea is abstract - I want to start a company, I want to work on social issues in Africa, I want to transform education – it is hard to disagree with. When you dig deeper into the idea, (down the ladder of abstraction) it becomes easier to pick holes in the idea, and rejection ensues. We must learn to reject acceptance, and pursue a clearly defined offer. Although it is challenging to get this clarity at first, the process is quite simple. Using a Socratic method, replacing the question of why with how and you quickly move from the entrepreneurs aspiration to the market defined offer. Many great ideas are based on things people want. How can an entrepreneur turn that perception into something more? Some of the most successful ideas, were not in fact in line with existing market needs/wants. Steve Jobs is famous for saying that he has no desire to learn what customers want, suggesting they have a limited view of what is possible. He says his job is to give them something they did not know they wanted, and make it so desirable it manifests closer to a need. In Making it Happen we call this Moving the Market, and if you truly want a point of difference, and a sustained competitive advantage being bold enough to push a market into a new adjacency, or even establishing a new market altogether is a very profitable activity if you can pull it off. In Making It Happen we offer a number of strategies for getting this done, referencing case studies of who utilized such strategies. How will one know when they've "made it?" The entrepreneur never actually "makes it". Part of what makes an entrepreneur set off in pursuit of their dream, is that they are never satisfied. It is something you feel deeply. It is not that you can't learn how to be more successful, you can. My point is that the entrepreneur is never done. In a way, we are always chasing the sunset. The key in my experience, is to come face to face with this reality, and embrace it. Once you recognize it for what it is, you can control it. You can transform it from a fear of never having enough (burning platform so to speak) to harnessing it as a desire to push the envelope (burning desire). When you have made this leap, you can also begin substituting your perennial "search" with other pursuits. Philanthropy has become HUGE for mega-successful entrepreneurs like Gates and Buffet. And as much as I hate to say it. Markets move. Buyers evolve. And competitors up their game. We must always be on the move, or we become the very mediocrity we set out to destroy. When is it time to reinvent? The time to reinvent is when you are at the top of your game. It is when you have the most momentum, the best cashflow and the highest levels of trust that we need to ante up and take new risks. The business world is littered with entrepreneurs and companies that failed to evolve. Think of Kodak – they invented the first consumer accessible digital camera, and then turned their back on it because they could not see the vision and possibilities in the technology. At the time they were profitable, had great distribution, and a powerful brand. Now they are forced to find new segments – namely Printers – with little cashflow, a damaged brand and a massive up hill battle on patent infringement on technology they should have lead the world in. Imagine that. You invent something. Turn your back on it. Then when everyone else makes a killing, develop a strategy based on litigation. They missed their time, so to speak. One of the challenges around reinvention is finally you get to enjoy the fruits of your labor and you need to ante up again. However, I think with the massive destruction caused by the GFC, the tight credit markets still for small to medium business, that the concept of reinvention is a call to action for the entrepreneurs who are feeling battered and bruised. Roll with the punches as they say. McKinsey just published a fascinating paper, similar to a piece of research done by the Corporate Executive Board which confirms what most of us know intuitively to begin with. Those who move earliest in the upswing profit the most when things are in full swing. It is obvious from the outside, but when you are the CEO / owner it is much harder to do. 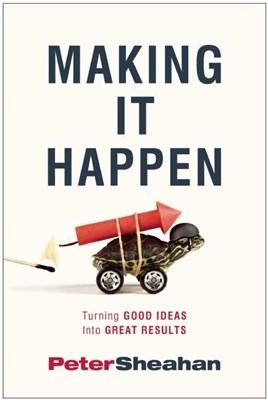