The 2022 Personal Development & Human Behavior book of the year is Stolen Focus by Johann Hari, published by Crown.

The computer always at our fingertips receives more of our attention than the people we love, and the companies that steal our attention have designed them to do exactly that. I don’t think most of us want to live this way. This book will help every distracted office and any individual who finds themselves unfocused throughout their day reprioritize and regain their focus.

The following excerpt comes from the book's Introduction. 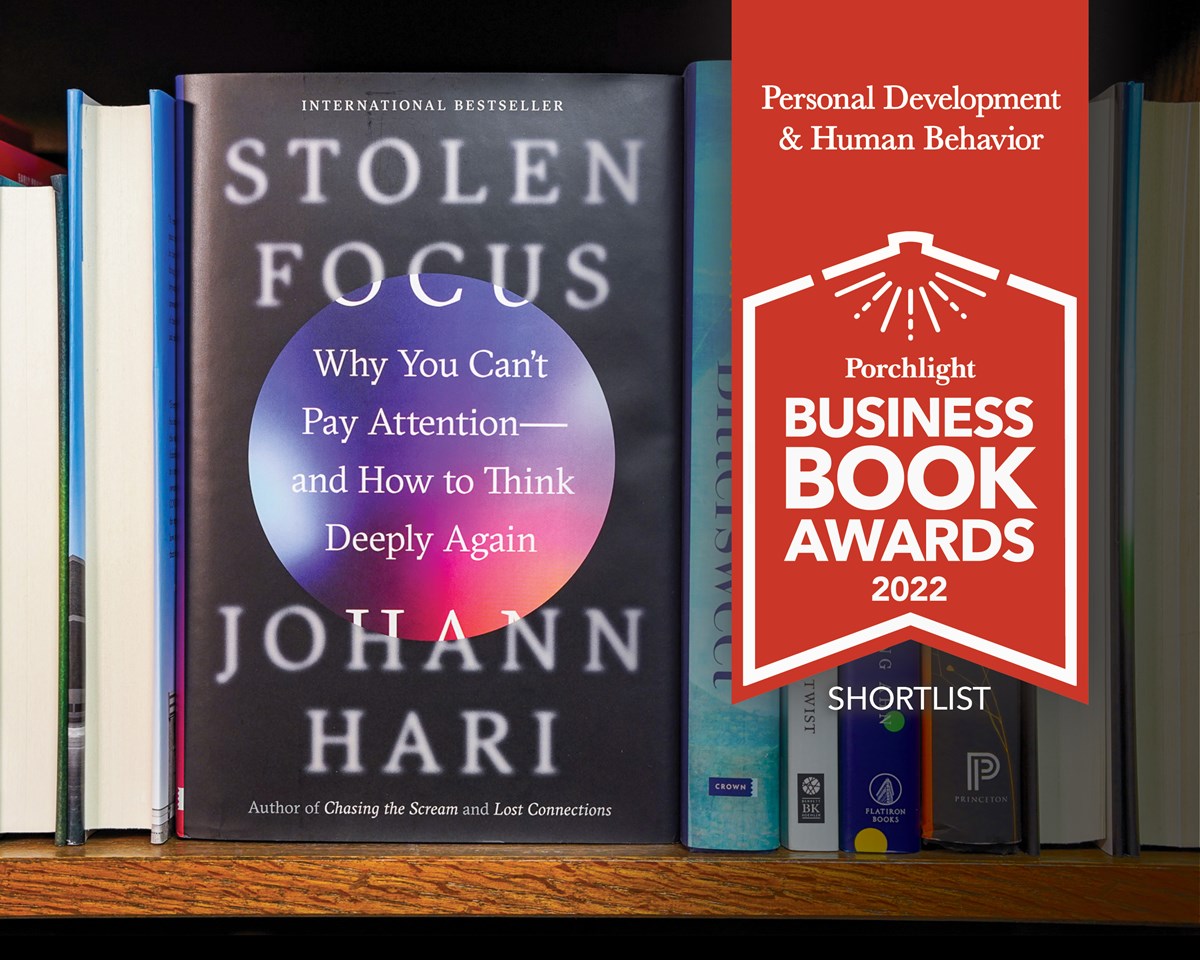 For a long time I reassured myself by saying this crisis was really just an illusion. Previous generations felt their attention and focus were getting worse too—you can read medieval monks nearly a millennium ago complaining that they were suffering from attention problems of their own. As human beings get older, they can focus less, and they become convinced that this is a problem with the world and with the next generation, rather than with their own failing minds.

The best way to know for sure would be if scientists, starting years ago, had done something simple. They could have given attention tests to random members of the public, and continued doing the same test for years and decades to track any changes that took place. But nobody did that. That long-term information was never gathered. There is, however, a different way I think we can reach a reasonable conclusion about this. As I researched this book, I learned that there are all sorts of factors that have been scientifically proven to reduce people’s ability to pay attention. There is strong evidence that many of these factors have been rising in the past few decades—sometimes dramatically. Against this, there’s only one trend I could find that might have been improving our attention. That’s why I came to believe that this is a real crisis, and an urgent one.

I also learned that the evidence about where these trends are taking us is stark. For example, a small study investigated how often an average American college student actually pays attention to anything, so the scientists involved put tracking software on their computers and monitored what they did in a typical day. They discovered that, on average, a student would switch tasks once every sixty-five seconds. The median amount of time they focused on any one thing was just nineteen seconds. If you’re an adult and tempted to feel superior, hold off. A different study by Gloria Mark, professor of informatics at the University of California, Irvine—who I interviewed—observed how long on average an adult working in an office stays on one task. It was three minutes.

So I went on a 30,000-mile journey to find out how we can get our focus and attention back. In Denmark I interviewed the first scientist who has, with his team, shown that our collective ability to pay attention really is rapidly shrinking. Then I met with scientists all over the world who have discovered why. In the end, I interviewed over 250 experts—from Miami to Moscow, from Montreal to Melbourne. My quest for answers took me to a crazy mixture of places, from a favela in Rio de Janeiro, where attention had shattered in a particularly disastrous way, to a remote office in a small town in New Zealand, where they had found a way to radically restore focus.

I came to believe that we have profoundly misunderstood what is actually happening to our attention. For years, whenever I couldn’t focus, I would angrily blame myself. I would say: You’re lazy, you’re undisciplined, you need to pull yourself together. Or I would blame my phone, and rage against it, and wish it had never been invented. Most of the people I know respond the same way. But I learned that in fact something much deeper than personal failure, or a single new invention, is happening here.

I first began to glimpse this when I went to Portland, Oregon, to interview Professor Joel Nigg, who is one of the leading experts in the world on children’s attention problems. He said it might help me grasp what’s happening if we compare our rising attention problems to our rising obesity rates. Fifty years ago there was very little obesity, but today it is endemic in the Western world. This is not because we suddenly became greedy or self-indulgent. He said: “Obesity is not a medical epidemic—it’s a social epidemic. We have bad food, for example, and so people are getting fat.” The way we live changed dramatically—our food supply changed, and we built cities that are hard to walk or bike around—and those changes in our environment led to changes in our bodies. Something similar, he said, may be happening with the changes in our attention and focus.

He told me that after studying this topic for decades, he believes we need to ask if we are now developing “an attentional pathogenic culture”—an environment in which sustained and deep focus is extremely hard for all of us, and you have to swim upstream to achieve it. There’s scientific evidence for many factors in poor attention, he said, and for some people there are some causes that lie in their biology, but he told me what we may also need to figure out: Is “our society driving people to this point so often, because we have an epidemic [that’s being] caused by specific things that are dysfunctional in our society?”

Later I asked him—if I put you in charge of the world, and you wanted to ruin people’s ability to pay attention, what would you do? He thought about it for a moment, and said: “Probably about what our society is doing.”

I found strong evidence that our collapsing ability to pay attention is not primarily a personal failing on my part, or your part, or your kid’s part. This is being done to us all. It is being done by very powerful forces. Those forces include Big Tech, but they also go way beyond them. This is a systemic problem. The truth is that you are living in a system that is pouring acid on your attention every day, and then you are being told to blame yourself and to fiddle with your own habits while the world’s attention burns. I realized, when I learned all this, that there is a hole in all the existing books I had read about how to improve your focus. It was huge. They have, on the whole, neglected to talk about the actual causes of our attention crisis—which lie mainly in these larger forces. Based on what I learned, I have concluded there are twelve deep forces at work that are damaging our attention. I came to believe we can only solve this problem in the long term if we understand them—and then, together, we stop them from continuing to do this to us.

There are real steps you can take as an isolated individual to reduce this problem for yourself, and throughout this book you’ll learn how to carry them out. I am strongly in favor of you seizing personal responsibility in this way. But I have to be honest with you, in a way that I fear previous books on this topic were not. Those changes will only get you so far. They will solve a slice of the problem. They are valuable. I do them myself. But unless you are very lucky, they won’t allow you to escape the attention crisis. Systemic problems require systemic solutions. We have to take individual responsibility for this problem, for sure, but at the same time, together, we have to take collective responsibility for dealing with these deeper factors. There is a real solution—one that will actually make it possible for us to start to heal our attention. It requires us to radically reframe the problem, and then to take action. I believe I have figured out how we might start to do that.

Excerpted from Stolen Focus: Why You Can't Pay Attention—And How to Think Deeply Again.
Copyright © 2022 by Johann Hari. All rights reserved.

Johann Hari is a writer and journalist. He has written for The New York Times, Le Monde, The Guardian and other newspapers. His TED talks have been viewed over seventy million times, and his work has been praised by a broad range of people, from Oprah Winfrey to Noam Chomsky to Joe Rogan.

Stolen Focus: Why You Can't Pay Attention—And How to Think Deeply Again