The 2018 Financial Times and McKinseyBusiness Book of the Year

Bad Blood has been named the Financial Times and McKinsey Business Book of the Year.

What is a business book? The answer to that has changed over the years, but one thing it has always included are the works of journalism that expose the ways in which businesses have brought as much harm to the world as improvement, as much suffering as legitimate services and solutions. There is a "change the world" ethos to the business book genre, but we can forget that businesses have changed it pretty dramatically for the worse if we don't hear from those doing the critical work of chronicling the damage. That is why books like The Smartest Guys in the Room, by Bethany McLean and Peter Elkind, and Roger Lowenstein's When Genius Failed are so important. And these books often point to larger systemic issues in our economy and society.

That is apparently not just the our opinion as booksellers out here in the provincial hinterlands of the "real" economy in Milwaukee, because the Financial Times and McKinsey & Company (respectively located in the finance capitals of London and New York City, and both at the center of global business thought) have been highlighting these kind of books consistently in their annual business book awards.

This year is no different, as they've named Bad Blood: Secrets and Lies in a Silicon Valley Startup by John Carreyrou the 2018 Financial Times and McKinsey Business Book of the Year.

The awards judging panel, which is chaired by FT editor Lionel Barber, explained that it "emerged as the clear winner over five other shortlisted titles in a judging session on Monday morning." FT management editor Andrew Hill wrote of the deliberations:

They said that it raised questions not only about the culture at one start-up—at its high point valued at more than $9bn—but in the whole of Silicon Valley.

The book offers insights about the cult of founder-leaders and weaknesses in regulation and corporate governance. Theranos’s board once counted among its members former US secretaries of state Henry Kissinger and George Shultz, and Jim Mattis, current US defense secretary. The group also attracted high-profile investors, including moguls Larry Ellison and Rupert Murdoch.

Accepting the award, Mr Carreyrou said that readers should learn from the Theranos scandal that the “move fast and break things” approach to technology innovation did not work well in areas such as healthcare or self-driving vehicles: “I hope that people read this book and keep in mind that this Silicon Valley playbook doesn’t apply very well to regulated industries and especially doesn’t [apply] when lives are at stake.”

You can argue, as many books this year do, that the "move fast and break things" approach of Silicon Valley hasn't worked well for much—if not most—of society. But Bad Blood may be the best, the most blatant and belligerent, example of that. (We posted a review of the book back in May, if you want our take.) Mr. Carreyrou will take home £30,000 for his effort.

And Andrew Leon Hanna took home £15,000 as the winner of the Bracken Bower Prize for the best proposal for a business book by an author aged under 35. In his book proposal, Hanna writes:

The economic narrative around the refugee crisis in Europe, the US, and elsewhere is also a harsh one—that there exists a choice between sacrificing economic wellbeing to compassionately integrate refugees, or building walls to leave them on the other side of the border or at the shore. Nothing in between.

Here the narrative is simply inaccurate.

His book, Twenty-Five Million Sparks,  he explains, "strives for a more genuine narrative"—documenting how "refugee camps and host communities are becoming hotbeds of entrepreneurship."

To learn more about the awards, visit ft.com/bookaward. 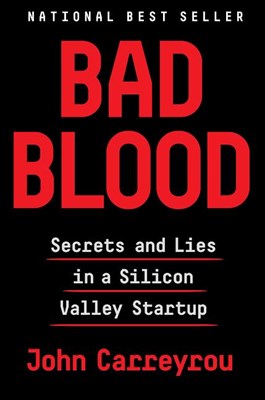