The Dip: A New Book Coming From Seth Godin

The name of the new book is The Dip: A Little Book That Teaches You When To Quit (and When To Stick) and the book is due out in May 2007.

It has been interesting to watch the evolution of this idea. You can see it first appear in 6/24/05 blog post about the four curves of want and get. Each curve described a pattern of adoption, but the real point Seth asks is "How do you know where you are?" He ends the post with this comment:

Skip ahead five months and Seth posts Understanding Local Max. Here the concept has evolved. He is still asking the question about knowing where you are with the popularity of the idea. A different curve appears showing some initial success and then a waning followed by a twofold increase. He labels four points on the curve and talks about the conversation you would be have at each point on the curve.

Understanding Local Max was a popular piece for Seth. There are 45 trackbacks on the entry, which means the total number of links to the post were probably 10 times that. Seth included the piece in Small is The New Big titled The Local Max and How To Avoid It (interestingly, you won't find the four curves piece). We selected it for Polkas, Pyrotechnics and Point D's on ChangeThis.

Here is the cover art and catalog copy for The Dip:

The best business books change the way you look at something - forever. The Tipping Point, The Long Tail, and Purple Cow are simple books about simple topics...but they changed the way millions do their jobs.

Every new project (or career or relationship) starts out exciting and fun. Then it gets harder and less fun, until it hits a low point - really hard, really not fun. At that point, you might be in a Dip (which will get better if you keep pushing) or a Cul-de-sac (which will never get better, no matter how hard you try). The hard part is knowing the difference and acting on it.

According to bestselling business author Seth Godin, what really sets superstars apart from everyone else is the ability to give up on Cul-de-sacs while staying motivated in Dips. Winners quit fast, quit often, and quit without guilt - until they commit to beating the right Dip for the right reasons.

This is equally true for entrepreneurs, pop singers, weightlifters, and car salesmen. Today's world rewards the people and organizations that are the best in the world at what they do. If you can be #1 in your niche, you'll get more than your fair share of profits, glory, and job security. But you'll never be #1 at anything without picking your shots very carefully.

The Dip is a short, fun-to-read book in the tradition of Fish, packed with powerful ideas and a graph that changes everything. It will forever alter the way people think about quitting - and success.


I'll end with this story. Seth was the subject of a cover story in the November/December issue of Selling Power. One story from the piece shows him foreshadowing and taking the opportunity to plant the idea again:

Big innovators fail all the time -- even Godin himself. In 1986, he was selling videotapes of a log burning in a fireplace. "So, if you want a fire, you could just put it on and watch it," he says. "I traded out some ads so I could run them in magazines."

To break even, he needed to sell 60, but he only sold 40. So he stopped selling them and sent everyone their money back, with a gift and a thank-you note. In the next two weeks, however he got 40 more orders.

"So, the big lesson of that failure for me was not that a fireplace on video is stupid. Well, it is stupid, but it was fun stupid. But the lesson was understanding when to quit."

As with all of his books, we can't wait to see the new one. What had been even more interesting is watching this one evolve. 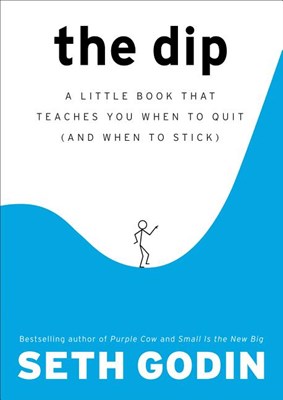 The Dip: A Little Book That Teaches You When to Quit (and When to Stick)