The High Cost of Mistrust by Judy Bardwick

Judy Bardwick is the author of One Foot Out the Door, the winner of the first 800-CEO-READ Business Book Award in the Human Resources category in 2007. She coined the term "Psychological Recession" to describe "why your people don’t seem all that excited about coming to work these days," and how that can affect your company’s financial health. You can read more about in an article she wrote for The Conference Board Review.

Judy Bardwick is the author of One Foot Out the Door, the winner of the first 800-CEO-READ Business Book Award in the Human Resources category in 2007. She coined the term "Psychological Recession" to describe "why your people don't seem all that excited about coming to work these days," and how that can affect your company's financial health. You can read more about in an article she wrote for The Conference Board Review. In the post below, she discusses the true—very high—cost of mistrust.
The High Cost of Mistrust

I well remember flying into Phoenix to meet with the CEO of a Fortune 500 company for the first time. After the usual pleasantries we sat down at a table, he grabbed my right forearm tightly, shoved his face close to mine and hissed, I want to kill them. I want to kill them all and I want you to deliver that message.

He was talking about his employees.

I looked him straight in the eye and said, That is your message and only you can deliver it. To my relief, I was swiftly removed from the building. What a sweetheart he was. I'm sure his employees were filled with feelings of trust and thrilled to be working for him.

When I was an undergraduate, I returned home for the summer and landed a job as a clerk at a manufacturer of women's undergarments. To say I was underemployed barely touches the surface, but I didn't care because my sole ambition was to earn the maximum I could while my father could still claim me as a tax deduction.

The management of our little unit was comical in its passionate lunacy of never letting us clerks out of their sight. We were monitored for the time we spent in the bathroom; we were required to clock in and out for lunch; we were monitored for break time. We were measured and noted and disciplined for time, while no one ever measured what we actually accomplished.

In this Alice in Wonderland setting the message was, your work doesn't mean anything. And neither do you. You're all so untrustworthy that without us, who knows what you'd do!

And we clerks reciprocated. As we were neither respected nor trusted, we returned the sentiment. In today's vocabulary, we had become Actively Disengaged. Instead of concentrating on our work which, in any event, we could all do in our sleep, we spent hours thinking up ways to get our two managers in trouble. And we succeeded. We managed to get the attention of our managers' bosses whenever our managers did anything unusually ridiculous. We did that so well that when a new operating system was introduced by corporate, one of us unworthy and untrustworthy clerks was put in charge of the new process and ultimately, of the office. What crocodile tears we shed!

United Airlines is consistently near the bottom rank among U.S. airlines in customer satisfaction. That may explain why it ranked higher in financial losses than American, Continental and Delta combined in 2008.

The United CEO won the Gold for Worst Management when, in addition to lousy service in a competitive industry where customers really do have choices, United decided on an adversarial relationship with their pilots—their pilots! Mechanics will likely be next. You can fly United, but count me out.

But United has a serious competitor for that medal: In March, 2007, Circuit City announced its plans to layoff 3400 employees. These days, that's not news. The fact that the layoffs were of their more experienced and successful sales people who not only sold the most but were also a primary source of training for new hires did not make it the stuff of headlines. It was still not media material when the reason they were laid off turned out to be the fact that they earned $14-15 an hour and new hires got about $8. It wasn't making the evening news, although it was getting closer because Circuit City's competitive advantage in a very competitive industry was their experienced and knowledgeable salespeople.

The really newsworthy part of Circuit City's plan, and the twist that put them in contention for the Gold for Inept Management, was they were willing to rehire their laid-off senior salespeople at the lower wage of a new hire. That literally guarantees a huge percentage of employees became Actively Disengaged, really motivated to do the company harm.

How might successful people who've been discarded and then rehired at an entry level wage feel about the company? We can guarantee that they would no longer be filled with the Milk of Human Kindness and gratitude to CC. How would they behave? Let me count the ways: they might steal merchandise or ignore thefts by others; they might bait and switch or just lie to customers, saying they had completely run out of an item the customer really wanted. They could recommend competitor's stores to frustrated buyers; they could hard sell inferior but expensive products; they could work to the clock. When trust is replaced by mistrust, employees become Actively Disengaged from their work and the organization, and the ways in which they sabotage the business is limited only by their lack of imagination.

These examples have all come from the world of business. But the reasons why trust never develops, or mistrust replaces trust, are the same in every aspect of life. The dynamics of trust are the same in your personal life or your political judgments as they are in relationships at work.

Where the level of trust is borderline, so is commitment. This condition is called Engaged and when that's the dominant feeling, commitment is weak and fragile. The Engaged state allows people to stay in a relationship or a job until either mistrust replaces trust or a better relationship or job comes along.

When people's behavior reflects their egotism, narcissism, greed, and especially hubris, we don't trust them. When their need for power obliterates any possible mutual respect and takes the form of steel bonds of control, barked orders and micro-managing, they are never trusted. When they break their word and lie, either flagrantly by acts of commission, or more subtly by omission, they will not be trusted. When people show us no respect or trust in us, we will not trust them.

The absence of trust is not simply passive—that something is missing. Instead, in the vacuum of trust, mistrust rushes in and fills the void. Mistrust is dangerous and expensive. It means people expect the worst and behave in line with that. Rules to control behavior proliferate, but they are inevitably ineffective because only shared values and trust can really govern behavior. In the face of mistrust, cooperation and teamwork are merely slogans shouted out by executives in the face of increasing narcissism and territoriality. Mistrust means everyone watches their back and not anyone else's.

Trust may be the single most critical building block underlying effectiveness. Without trust, "leaders" are impotent because they do not have followers. And without followers, nothing gets accomplished. No matter how great the insights and seminal ideas of the leader, without followers nothing will happen.

In every relationship, whether it's a boss, or a politician, or a friend, partner or spouse, trust resides in the belief that there is no duplicity, no manipulation, and no narcissistic ego in the relationship. Like many profound things, this is really simple: trust rests on the belief that the other person and every act are transparent: This literally means, What you see is all there is.

The only way anyone can recreate trust and a mutual, grounded relationship, is to be open, especially spontaneously open about how they feel and what they intend to do—and then follow through and do it. This is always an easy prescription to understand, but extremely difficult to do. The poisons of pride and mistrust, of guilt and remorse, of resentment of the past and desperate hopes for a better future makes it very, very hard to suspend disbelief and accept things at face value.

But doing the hard work of recreating trust is well worth doing because when mistrust prevails, believe me, the piper will be paid. And rest assured, no matter how many acquiescent smiles may appear on the face of those still feeling betrayed, the payback interest they will demand will be beyond money and can never be paid off. That's why mistrust really costs. 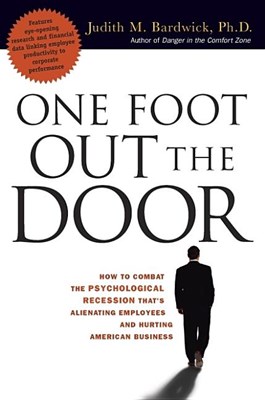 One Foot Out the Door: How to Combat the Psychological Recession That's Alienating Employees and Hurting American Business