In the lead up to announcing the Porchlight Business Book of the Year on January 13th, we are going to share excerpts from each of the eight books on the shortlist for the award. Today, we have an excerpt from the Personal Development & Human Behavior book of the year, The Wake Up by Michelle MiJung Kim.

The 2021 Porchlight Personal Development & Human Behavior book of the year is The Wake Up: Closing the Gap Between Good Intentions and Real Change by Michelle MiJung Kim.

As our Community and Publicity Manager, Emily Porter, recently wrote about the book:

Seeking the knowledge and learning that enables us to become more well versed on everyday forms of oppression, and to better understand those around us, is important for us all. Michelle MiJung Kim, CEO and Co-Founder of Awaken, an organization that helps “empower leaders and teams to lead inclusively and authentically,” has an ample amount of experience in facilitating such understanding and bringing clarity to why we must address such things at work—in ways both big and (seemingly) small.

And, as we all know from our own personal lives, seemingly small acts can have a big impact, while the bigger issues in our society have a way of filtering into our smaller, everyday interactions. Helping us more clearly see how and when and why that happens—especially in our own interactions, especially when it can cause us to inadvertently harm those we care about and work with—is just one way The Wake Up can transform our good intentions into real change.

The following excerpt is adapted from the book's first chapter, "When 'Good People' Cause Harm." 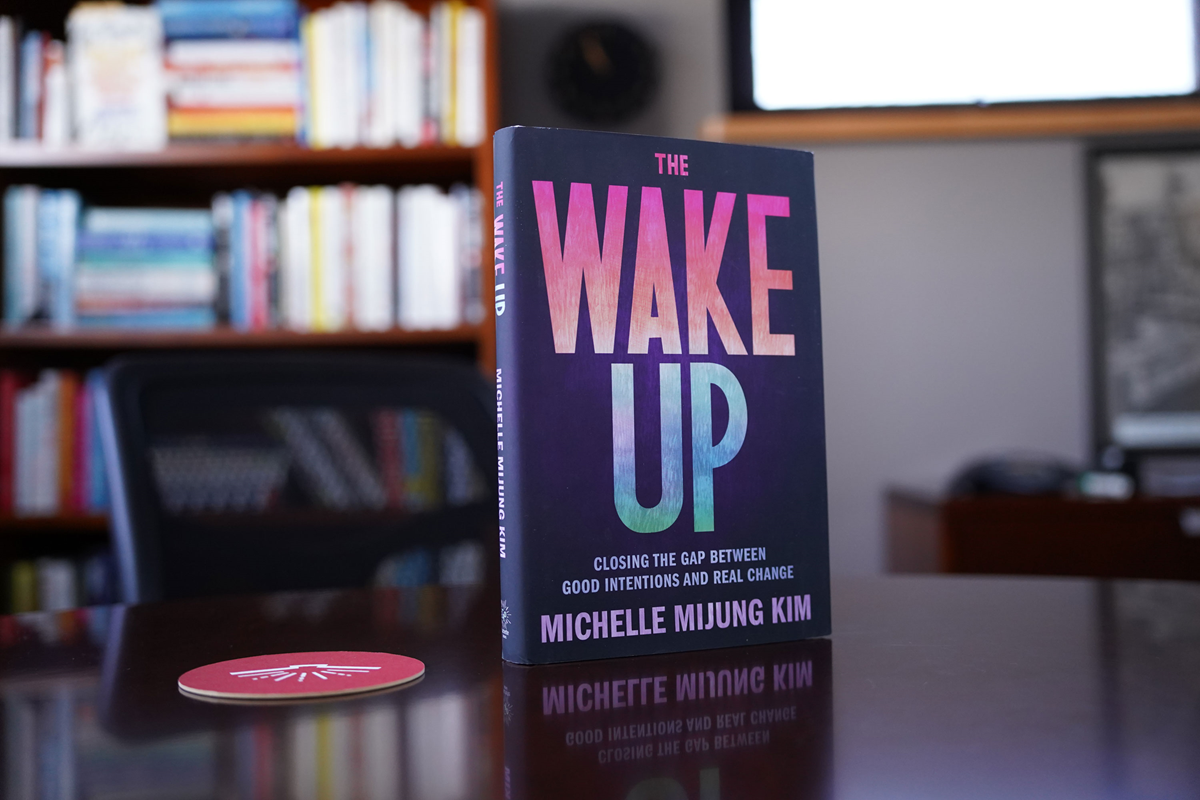 WHEN "GOOD PEOPLE" CAUSE HARM

Many of us are guilty of this. We use all the right words, quoting our favorite social justice writers and boasting our academic understanding of social inequities—and yet in our most intimate relationships, we replicate the very harm we are trying to distance ourselves from without realizing it. White people do this with people of color, cis people do this with trans and nonbinary people, heterosexual people do this with queer people, abled people do this with disabled people. We are quick to declare that we are safe and that we “get it,” but there is nothing safe or trustworthy about the ways we cause harm that multiply into macrolevel inequalities, all while we wear our “good person” name tags.

Being called an “-ist”—racist, sexist, ableist, and so on—can feel like a deadly attack on our character, causing us to either shrivel up and disappear into the abyss or fight tooth and nail to defend our goodness. The label racist, especially, which we often register as an identity rather than an adjective, is so abhorrent that we’ll invest all our energies digging up receipts from that one time we donated to a racial justice cause; or quickly labeling distant acquaintances belonging to that particular racial group as our “friends”; or explaining away harm we caused by emphasizing how we never intended to be racist and demanding instant forgiveness or, worse, an apology for this incredulous misunderstanding about our character. But just like good, racist is an adjective that can be used to describe any of our actions, behaviors, thoughts, practices, systems, and narratives that uphold the false superiority of whiteness while maintaining unequal power dynamics—and we don’t need to be wearing a white hood to perpetuate any of these everyday egregious acts of racism. Any action can be racist if it perpetuates the injustice rooted in white supremacy and racism. Any action can be transphobic if it perpetuates the injustice rooted in cisgender supremacy and transphobia. Any action can be sexist if it perpetuates the injustice rooted in patriarchy and sexism.

Part of our obsession with wanting to be seen as a good person is fueled by our binary thinking: if we are not good, then that must mean we are bad. And this good-bad binary leads us to expect moral perfection from those whom we’ve put on a pedestal while brutally punishing those we’ve crossed off as being bad. There is no room for mistake, growth, or transformation, and we do everything in our power to not cross over to the “bad” list because we’ve seen what happens to those people. This binary narrative hinders us from separating our actions from our identities, making it incredibly difficult to receive any critical feedback about our impacts, feedback that could in turn make our actions better aligned with our desire to do good. To be an absolutely “good person” is a near-impossible goal we cannot meet, and it puts our entire ecosystem at risk by setting all of us up to fail.

There are no good people because we don’t always do good things. Rather, we are just people, engaging in different behaviors and actions, causing different impacts to different communities, making decisions that either benefit or deter the movement toward social justice. We are not, and cannot be, one- dimensionally absolutely good or bad. Good is an adjective, not an identity, that changes with our daily actions and impacts. So rather than asking, “Am I a good person?” ask yourself, “Do my actions have a good impact?”

The murder of George Floyd jolted America’s heart and moved people to action like I had never seen before. As non-Black individuals and organizations contemplated their response to the horrific display of police violence against Black people, different calls to action began to emerge and lists upon lists were created to steer people in the right direction to show up for the Black community. In response to the delayed outcry, many of these lists encouraged people to proactively check in on their Black friends and colleagues while urging companies to make public statements about their stance on Black Lives Matter. And so people sent text messages to the Black people in their lives, and coworkers swarmed their Black colleagues’ inboxes: “How are you doing?” “What can I do to support you?” While some appreciated what they felt were genuine messages of concern, others found these messages, sent by people whose care they had not felt before the global reckoning, hollow and too little, too late. The lack of preexisting relationships, coupled with a sudden, seemingly performative display of concern, left a bitter aftertaste of virtue signaling rather than a sign of genuine friendship that transcended the momentary attention.

Some messages, in addition to checking in, included an ask for guidance on how to show up and be a part of the antiracism movement. “How can I be an ally?” “What can I do?” “Can you share resources for me to check out?” Despite the good intention to be of support, these messages quickly became yet another source of pressure and burden to be shouldered by Black people. During this time, I heard from countless Black employees inside organizations who were tasked with finding an external consultant to help conduct antiracism trainings, most of whose daytime jobs had nothing to do with DEI (diversity, equity, inclusion) or even HR (human resources). Not one of them told me they were being compensated for their additional labor. Instead, they recognized the impossible position they had been put in, both as a person suffering from the ongoing trauma and also as someone others wanted to listen to and be led by to address the issue that had received no prior investment or attention. “I guess it’s better than nothing,” some said, expressing their desire to take advantage of this opportunity to make a difference, even if it meant putting their live pain and exhaustion on pause so they could educate and bring others into the fold. In the face of non-Black people centering their need to be seen as “doing good” in these moments of deep trauma, Black people were expected to hold space and do the work to solve non-Black people’s confusion, shock, and despair, rather than being given the space they needed to grieve in peace.

This intense period reminded me of a time when I was called in by a Black friend I had known for over a decade, who gently asked me to stop texting them every time there was a Black murder in the media because they were beginning to associate my outreach with such news. I was mortified, of course, and I had to sit and reflect for a while to really understand the hurt I had caused my friend, making them feel reduced to a news-cycle response rather than a multidimensional human being whom I cared about deeply beyond these moments of sadness and rage.

In spite of our good intentions, we can still cause harm. Good intentions don’t make good people. Only good impacts make our contributions useful in the moment. And that’s why our intent to do good is rarely a helpful measure of progress.

We often like to imagine our good acts as something that is happening only in the present moment, without regard to our past. Our sudden awakening energizes us to do something immediately, quickly, and effectively; through our actions today, we hope to be a part of the solution tomorrow. But what we need to remember is the context—that different marginalized communities have been shouldering the pain and resisting systemic oppression for centuries, and while some of us may have just now become conscious of them for the first time, our excitement to do good should never come at the expense of those who have already been doing the work without us.

Here’s the thing—our actions won’t always count toward good if we don’t make good with our past first. We need to spend time reflecting on our history, including when we weren’t there for the people we want to show up for right now. We need to acknowledge that we may have even caused harm, regardless of our intentions or awareness, and that this harm may have never been addressed. We need to measure the marbles in our trust jar with each person and each community, and refrain from asking for immediate recognition or appreciation the moment we decide to show up. Instead of jumping into the fray, let’s get grounded and oriented so we can do the work in a thoughtful way and in right relationship with those who have been carrying our weight while we were asleep.

Excerpted from The Wake Up: Closing the Gap Between Good Intentions and Real Change.
Copyright © 2021 by Michelle MiJung Kim. All rights reserved.

Michelle MiJung Kim (she/her) is a queer immigrant Korean American woman writer, speaker, activist, and entrepreneur. She is CEO and co-founder of Awaken, a leading provider of interactive equity and inclusion education programs facilitated by majority people of color educators, where she has consulted hundreds of organizations and top executives across various industries, from technology to nonprofits to government agencies to universities. As a lifelong social justice advocate, Michelle has served on a variety of organizations such as the San Francisco LGBTQ Speakers Bureau, San Francisco Human Rights Commission’s Advisory Committee, LYRIC nonprofit’s Board of Directors, and Build Tech We Trust Coalition. Michelle currently serves on the board of Asian Americans for Civil Rights and Equality (AACRE). Her work has appeared on platforms such as Harvard Business Review, Forbes, The New York Times, and NPR, and she has been named Medium’s Top Writer in Diversity three years in a row. Michelle lives in Oakland, California. 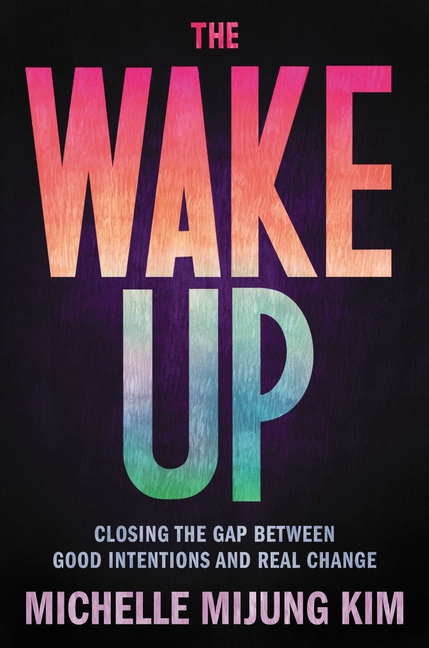 The Wake Up: Closing the Gap Between Good Intentions and Real Change