To Be or Not to Be...Creative

A friend posted on Facebook a link to this article, with the somewhat obvious title, "People are biased against creative ideas, studies find," and it's contents have stuck with me all week. It comes from a website called PhysOrg which I've never heard of despite having a science geek for a husband. PhysOrg's mission as described on it's website is "to provide the most complete and comprehensive daily coverage of the full sweep of science, technology, and medicine news.

A friend posted on Facebook a link to this article, with the somewhat obvious title, "People are biased against creative ideas, studies find," and it's contents have stuck with me all week. It comes from a website called PhysOrg which I've never heard of despite having a science geek for a husband. PhysOrg's mission as described on it's website is "to provide the most complete and comprehensive daily coverage of the full sweep of science, technology, and medicine news." And with a goal of 100 new articles posted a day on "physics, earth science, medicine, nanotechnology, electronics, space, biology, chemistry, computer sciences, engineering, mathematics and other sciences and technologies," and a membership of 1.75 million scientists, researchers and engineers, PhysOrg is an impressive site. While I joked that the title of the article is somewhat obvious--we certainly know that there is a percentage of the population who disdain creative ideas, or defensively discredit them, and sometimes we excuse them as being left-brained--but the article (and the study it is based on) itself is making an additional more provocative point. In addition to bias against creative ideas, the research (from a forthcoming article in Psychological Science) shows that some people don't know a creative idea from a hole in the ground, that some people can't actually see a creative idea. In addition to a sort of creativity blindness, another point that the research highlights is: "Objective evidence shoring up the validity of a creative proposal does not motivate people to accept it." Considering the number of PowerPoint presentations that are often crafted to defuse any skepticism of the overall "big idea," this is perspective-changing stuff. In fact, the authors of the study suggest that the only way to rid organizations, even those whose intentions are deeply rooted in innovation and creativity, of this bias or blindness could even be this drastic: "The field of creativity may need to shift its current focus from identifying how to generate more creative ideas to identify how to help innovative institutions recognize and accept creativity." That's a pretty big task, and how exactly can it happen? Perhaps we can look to Micheal Michalko for help. Michalko is the author of Thinkertoys, one of our The 100 Best Business Books of All Time. While readying The 100 Best for it's updated paperback release this fall, we spent some extra time with the books we featured briefly in our Takeaway chapter of the book, expanding the reviews to include more detail. It was especially fun for us to revisit Thinkertoys not only because some of the content is reminiscent of those variety puzzle magazines found in drugstores that we all secretly and not-so-secretly love, but because of it's applicability. Just as the subtitle--A Handbook of Creative-Thinking Techniques--says, Thinkertoys can help those aforementioned folks who aren't the creative type learn how to be creative. That's the important word here: learn. No, not everyone is creative. But creativity, according to Michalko, can be self-taught, cultivated, discovered. You can choose to BE creative. And Michalko knows a thing or two about getting creativity-resistant organizations to change. His website bio explains:

As an officer in the United States Army, Michael organized a team of NATO intelligence specialists and international academics in Frankfurt, Germany, to research, collect, and categorize all known inventive-thinking methods. His international team applied those methods to various NATO military, political, and social problems and in doing so it produced a variety of breakthrough ideas and creative solutions to new and old problems. After leaving the military, Michael facilitated CIA think tanks using his creative thinking techniques.

Just a visit to his website, not unlike PhysOrg in its wealth of references, which yields an absolutely stunning assortment of articles, interviews, resources: a veritable practicum. You can also follow Michalko via his blog on Psychology Today. But perhaps his work is best appreciated in book form, where you can scribble in the margins, and bend the pages, and carry it over to your coworker's cubicle to test them on one of his thought experiments. Yes, make sure you have a pen when you are opening up one of Michalko's books, and we are all very lucky that he has a new one available for us to learn from, titled Creative Thinkering.

In Creative Thinkering, Michalko challenges us to put our imaginations to work and believes with a great passion that everyone is creative. Or should be. Or can be. It is as though we've unlearned creativity. "We've been educated to process information based on what has happened in the past, what past thinkers thought, what exists now. Once we think we know how to get the answer, based on what we have been taught, we stop thinking," he explains in the Introduction, and then immediately proceeds to challenge the way you think with some mind-bending games. In this new book, Michalko wants to teach us conceptual blending, "which is the act of combining, or relating, unrelated items in order to solve problems, create new ideas, and even rework old ideas....It is no coincidence that the most creative and innovative people throughout history have been experts at forcing new mental connections via the conceptual blending of unrelated objects." And once again, the material he presents throughout the book is entertaining but also so very do-able. Through the exercises and insights in his books, Michalko provides the material to train even the most creatively-blind how to open his or her eyes to their own and others' creative ideas. 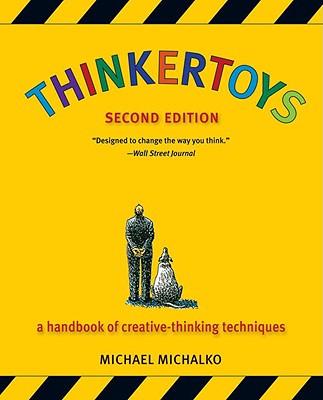