Sitting at my desk this morning, I was casually watching as attendees arrived for a meeting in our conference room, and noted with some Pavlovian consternation that every person in attendance was male. And I thought it odd, yet. .

Sitting at my desk this morning, I was casually watching as attendees arrived for a meeting in our conference room, and noted with some Pavlovian consternation that every person in attendance was male. And I thought it odd, yet...not so odd. Not odd, because of the 13 regular employees in our company, only four of us are female, and only one works physically in the office full-time, so the likelihood of having an all-male meeting is pretty high. (Note: I'm not sending up a flare against gender inequality here: the percentage of our owners and board members leans significantly female.) But there is something odd about the sight of a boardroom full of men, particularly on International Women's Day, that stirs, I suppose, some instinct in me to be reflective about women in the workplace, and, more often, the lack of women in work places like corner offices and boardrooms. It's certainly a topic on many tongues these days, what with Marissa Mayer's built-in nursery contrasted against her recent decree that bans telecommuting for Yahoo employees. And it's also a topic that drives one of the biggest business books to be released in early 2013: Sheryl Sandberg's Lean In: Women, Work, and the Will to Lead. Sandberg is the COO of Facebook and an outspoken commentator on the state of women leaders in business. Her TED Talk, Why We Have Too Few Women Leaders, from 2010 has nearly 2 million views, and focuses on keeping women in the workforce from a more personal perspective than taking issue with corporate compromises like telecommuting or maternity leave. The success of that presentation spurred the writing of this book.

Lean In carries forward that same message, and Sandberg shows an admirable willingness to accept her role as a leader and feminist in a way many successful women tend to refute, possibly because they fear the label of "feminist" will cause some backlash. Sandberg has received plenty of backlash (and praise) for her message, and that's nothing new to her:

I know some believe that by focusing on what women can change themselves--pressing them to lean in--it seems like I am letting our institutions off the hook....Far from blaming the victim, I believe that female leaders are key to the solution. Some critics will also point out that it is much easier for me to lean in, since my financial resources allow me to afford any help I need. My intention is to offer advice that would have been useful to me long before I had heard of Google and Facebook and that will help women in a broad range of circumstances.

Taking Sandberg's message in the spirit with which she intends, the book is as inspiring and intimate as her TED Talk. An engaging storyteller, Sandberg is willing to put her own life up as an example of both success and struggle in the effort to encourage women to continue to try to have it all. This "having it all" thing that used to be the mantra of women striving for work and family success has taken a beating lately, most notably by Anne-Marie Slaughter who wrote in The Atlantic this summer:

Women of my generation have clung to the feminist credo we were raised with, even as our ranks have been steadily thinned by unresolvable tensions between family and career, because we are determined not to drop the flag for the next generation. But when many members of the younger generation have stopped listening, on the grounds that glibly repeating "you can have it all" is simply airbrushing reality, it is time to talk. I still strongly believe that women can "have it all" (and that men can too). I believe that we can "have it all at the same time." But not today, not with the way America's economy and society are currently structured.

Slaughter got criticized (lots of people would prefer to focus on the choices women get to make now, rather than think there are any limitations to those choices) and supported (Gloria Steinem would agree that women can strive to have it all, but unless society changes, it ain't gonna happen) for that piece, just as Sandberg gets criticized for encouraging women to keep leaning in, to keep striving, and to do that by changing our own attitudes and efforts. As her subtitle makes clear, Sandberg puts a lot of emphasis on "will." Yes, coming at the problem of gender inequity individually is a lot to put on women who already shoulder a lot of responsibility in their lives, but it's a message that every individual can actually strive to incorporate and reap benefits from. Activism is important. Making change company-wide should always be a goal. But as with most everything else, change starts one person at a time. Both aspects--organizational change and individual determination--must happen symbiotically for women to become more frequent attendees in every corner office and boardroom. After all, Sandberg reasons,

Every social movement struggles with dissension within its ranks, in part because advocates are passionate and unlikely to agree on every position and solution. [...] There are so many of us who care deeply about these matters. We should strive to resolve our differences quickly, and when we disagree, stay focused on our shared goals.

*** Sheryl Sandberg's book isn't the only recent business book written by a woman for women in business that critiques and encourages. Here are a few other notable additions to your reading list: And for those folks who read this post and others like it who would ask, "Why do we need more books by women for women in the workplace? Aren't we past all that?", let's let Sheryl Sandberg have the last word today on International Women's Day:

We need to be grateful for what we have but dissatisfied with the status quo. This dissatisfaction spurs the charge for change. We must keep going. [...] The march toward true equality continues. It continues down the halls of governments, corporations, academia, hospitals, law firms, nonprofits, research labs, and every organization, large and small. We owe it to the generations that came before us and the generations that will come after to keep fighting. 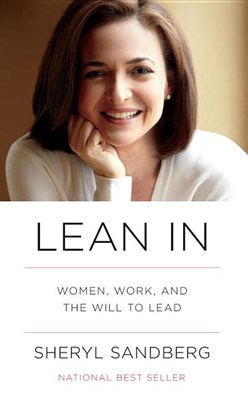