5 Books That Changed My Perspective

We've been talking about how to help people, how to focus on what's positive and helpful in the current state of our world, rather than grumbling over the things that are both out of our control and truly uncertain. One of the ways we can do that is by starting a conversation that starts at a personal level. .

We've been talking about how to help people, how to focus on what's positive and helpful in the current state of our world, rather than grumbling over the things that are both out of our control and truly uncertain. One of the ways we can do that is by starting a conversation that starts at a personal level...by talking about our own experiences and the books that have shaped our lives. We've also heard a lot about change, lately. Below I list 5 books that changed my perspective on something; not all have a business angle, but each does have something universal to offer readers. 1. Leaves of Grass by Walt Whitman, 1st edition

If you're discouraged by the dark cloud of political rhetoric that has settled over the U.S. for the past, oh, two years, I recommend reading Whitman's introduction to Leaves of Grass as a reminder of why we should care so deeply about our country and government:

"...but the genius of the United States is not best or most in its executives or legislature, nor in its ambassadors or authors or colleges or churches or parlors, nor even in its newspapers or inventors...but always most in the common people. Their manners speech dress friendships--the freshness and candor of their physiognomy--the picturesque looseness of their carriage...their deathless attachment to freedom--their aversion to anything indecorous or soft or mean [...] their delight in music [...] their good temper and openhandedness--the terrible significance of their elections--the President's taking off his hat to them and not they to him--these too are unrhymed poetry. It awaits the gigantic and generous treatment worthy of it."

2. Space and Place: The Perspective of Experience by Yi-Fu Tuan.

This is an incredibly accessible and enjoyable book about the cultural significance of geography and physical orientation. Tuan explores the ways people have historically made sense of their surroundings. For instance, he examines why we form attachment to "home," how time affects our sense of space, and why certain cross-cultural similarities exist among groups that have had no exposure to the habits and values of others (e.g., our proximity to others, or the prominence of right-handedness). I read this book as part of a grad school project on "sense of place" in virtual environments, and it has changed the ways I perceive the space around me and my values with regard to architecture and place.

"What sensory organs and experiences enable human beings to have their strong feeling for space and for spatial qualities? Answer: kinesthesia, sight, and touch. Movements such as the simple ability to kick one's legs and stretch one's arms are basic to the awareness of space. [...] Space assumes a rough coordinate frame centered on the mobile and purposive self. [...] Purposive movement and perception, both visual and haptic, give human beings their familiar world of disparate objects in space. Place is a special kind of object. It is a concentration of value, though not a valued thing that can be handled or carried about easily; it is an object in which one can dwell."

Reading Emergence was like a thousand light bulbs turning on in my world. I grew up with a mentally disabled family member, but until I read Temple Grandin's words about what it felt like to be overwhelmed by her existence, I did not fully appreciate the complexities of the minds around me. Grandin has also contributed greatly to our understanding of the animal world, and has worked as a scientist to develop more humane ways of interacting with animals.

"But as a child, the "people world" was often too stimulating to my senses. Ordinary days with a change in schedule or unexpected events threw me into a frenzy, but Thanksgiving or Christmas was even worse. At those times our home bulged with relatives. The clamor of many voices, the different smells--perfume, cigars, damp wool caps or gloves--people moving about at different speeds, going in different directions, the constant noise and confusion, the constant touching, were overwhelming. One very, very overweight aunt, who was generous and caring, let me use her professional oil paints. I liked her. Still, when she hugged me, I was totally engulfed and I panicked. [...] I withdrew because her abundant affection overwhelmed my nervous system."

4. Survival in Auschwitz by Primo Levi

Of the few voices we have from this dark period in our world history, Primo Levi's is perhaps the most renowned and penetrating. Survival in Auschwitz is his memoir of the 10 months he spent in the death camp. He details the subcultures that develop within even the most degrading of circumstances, reflects on our instincts and desire to overcome in the face of utter hopelessness, and creates an arresting, almost visceral reading experience that helped me understand, in my sheltered experience, what millions of people endured through no fault of their own.

"If we were logical, we would resign ourselves to the evidence that our fate is beyond knowledge, that every conjecture is arbitrary and demonstrably devoid of foundation. But men are rarely logical when their own fate is at stake; on every occasion, they prefer the extreme positions. According to our character, some of us are immediately convinced that all is lost, that one cannot live here, that the end is near and sure; others are convinced that however hard the present life may be, salvation is probable and not far off, and if we have faith and strength, we will see our houses and our dear ones again. The two classes of pessimists and optimists are not so clearly defined, however, not because there are many agnostics, but because the majority, without memory or coherence, drift between the two extremes, according to the moment and the mood of the person they happen to meet."

5. Made to Stick: Why Some Ideas Survive and Others Die by Chip Heath and Dan Heath

I know we give the Heath brothers a lot of love here at 800-CEO-READ, but I hope that my selection demonstrates the transformative nature this recent business book can have on the way you do your work. As a relative newcomer to the world of business books, Made to Stick will forever stick (no pun intended) in my mind as one of the first and most influential business books I have read on communication. I can't tell you how many times we referenced ideas from Made to Stick while working on The 100 Best. And while we recognize that the book borrows definitions and terms from other places (most notably, The Tipping Point by Malcolm Gladwell), Made to Stick is the only one that lays out a practical and useful way of putting these ideas to work.

"No special expertise is needed to apply these principles. There are no licensed stickologists. Moreover, many of the principles have a commonsense ring to them: Didn't most of us already have the intuition that we should "be simple" and "use stories"? It's not as though there's a powerful constituency for overcomplicated, lifeless prose. But wait a minute. We claim that using these principles is easy. And most of them do seem relatively commonsensical. So why aren't we deluged with brilliantly designed sticky ideas? Why is our life filled with more process memos than proverbs? Sadly, there is a villain in our story. The villain is a natural psychological tendency that consistently confounds our ability to create ideas using these principles. It's called the Curse of Knowledge. (We will capitalize the phrase throughout the book to give it the drama we think it deserves.)"

Now, we'd like to ask you: What are the books that changed your perspective? How can they help others? 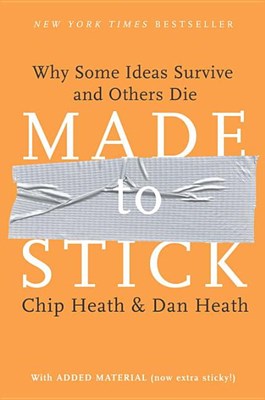 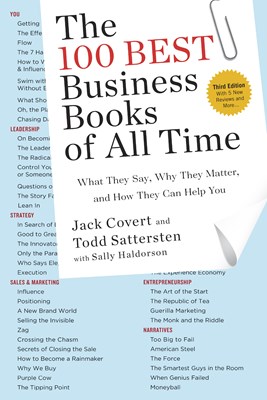