A Q&A with Geoff Colvin, Author of Humans Are Underrated

Geoff Colvin answers a few of our questions about how humans are underrated in an age of rapid technological advancement. I really enjoyed Geoff Colvin's new book, Humans Are Underrated. Part of it's greatness is in the fact that he doesn't side-step the tricky employment questions that surround the issues of information technology's advance—how it is not just "disrupting" the marketplace, but destroying jobs. He, in fact, devotes the first two chapters of the book to exploring those issues in depth. Another element that makes it stand out is his abiding optimism in spite of that. The book is, after all, mostly about how even in the face of machines that increasingly do most things better than us, humans are still underrated.


Perhaps most of all, I love it because it brilliantly references a Spencer Tracy and Katharine Hepburn movie, and I love Spencer Tracy and Katharine Hepburn movies. Spencer Tracy is perhaps my favorite actor ever, not least because he's from Milwaukee, and Katharine Hepburn is Katharine motherloving Hepburn! Their 1957 romantic comedy Desk Set is about a television network's research department, which Hepburn's character leads, being replaced by a computer (or "electronic brain," designed by Tracy's character) that makes much of their work, to put it nicely, no longer necessary. The movie is, as Colvin says, prescient to say the least, but a part of the narrative brilliance of bringing it to this story is that Hepburn's character is named Miss Watson. This story begins the second chapter. The first chapter begins with Colvin relating his story of competing against an electronic brain in Jeopardy. That brain, as you may have already surmised, is IBM's Watson. So, long story short, I enjoyed the book because it's brilliantly constructed and written.

Which is why I was so excited when Geoff agreed to answer some questions about the book. And his answers are, as I expected, intelligent and eloquent. So, let's get to them...

800-CEO-READ: The question at the heart of your new book is: What, in just a few years' time, will we be better at than the machines we've built? Computers are getting smart enough to do the work of our smartest professionals (lawyers, doctors, professors) and robotic dexterity and precision is improving to a degree that makes our natural bodies seem rather clumsy. When those two things are combined, what advantage can we possibly have over our machines? What jobs will be left for us to do?

Geoff Colvin: Let's assume that the world continues to be run by and for people. Formidable thinkers including Stephen Hawking, Elon Musk, and Bill Gates are worried about artificial intelligence someday seizing control from humans, and I take their concerns very seriously. But while Hollywood loves this premise, I haven't heard anyone suggest it will happen soon, if it happens. So long as people are in charge, we will decide which problems to solve and how to solve them, from weighty issues of national strategy to personal issues like how to invest our savings. And we will do all of it by interacting with other people. Why? In many cases because multiple constituencies must be represented. In all cases because we are hardwired to interact with our fellow humans. When we were evolving out on the savanna, that's how we survived. Aristotle was right: We are social animals.

Think of it this way. Software will continue doing more of what lawyers do. But a lawyer who can connect emotionally with a client, persuading him to act rationally, calming his fears, earning his trust—that's a lawyer who will keep working and will do well.

8cr: In Talent Is Overrated, you told us that humans don't really posses innate talents, that we achieve what we're able through hard work and practice. In Humans Are Underrated, you tell us that it's our innate abilities, our deepest nature, that will be most valued in an increasingly digital world. Can you square the two for us? And if our deepest nature is now becoming our most valuable asset, how can we work on that, practice and hone it?

GC: I've been waiting for someone to ask that question. In Talent Is Overrated, I argued (based on extensive research) that we do not come into this world with abilities to perform well at specific activities like playing tennis, reading a balance sheet, or flying a plane. We get good at those things through deliberate practice, which I define in the book. Humans Are Underrated argues that we do come into this world with some deep-rooted general abilities of human interaction—forming bonds, empathizing, communicating. But I also note that while we're all human, we're not all especially good at these abilities. We can all get better at them, however, and guess how: the same way we get better at anything else, through the elements of deliberate practice. That's why we see organizations now training empathy, relationship building, and other deep human skills of interaction, as I describe in the book.

8cr: You argue that technology is changing more than just how we work, and what work we might do. It's changing us—in fundamental ways, and mostly the wrong ways. How is that true and how can we counteract it?

GC: Technology is actually causing our skills of human interaction to atrophy. That fact surprises many people, who observe that we're interacting more than ever—digitally. But research shows that our abilities to empathize, bond, and collaborate are built through in-person, face-to-face interaction. All of our texting and emailing takes time away from old-fashioned in-person relationships, and we simply can't relate as effectively online. Evidence shows that Facebook-only friends don't matter as much as in-person friends. Is anyone surprised?

We can counteract these effects in several ways. The simplest and best is to put down our digital devices and interact with others in person. When that's not possible, do a video chat, or if not that, then a phone call. Emailing and texting are the weakest kind of interaction, so they should be a last resort. Yet for many of us, they're the first choice.

8cr: Empathy and business have come to be been seen as antithetical to each other. People are constantly reiterating that "it's not personal; it's business!" And it's more often assumed that we have to be ruthless to succeed in business than personable and empathetic. I think this has always been somewhat dubious, and depends on one's understanding of success, but you tell us in no uncertain terms that it will be true no longer, that rebuilding our ability for empathy is going to be crucial to our success in the future. What, if anything, has changed to make this true, and how do we go about building this skill?

GC: What has changed is that machines are increasingly doing the machine work of our world. People used to do a lot of it—repetitive factory work, office tasks, information processing and transmitting. You don't need much empathy for those jobs. But now, increasingly, humans don't do them. What's left for us is the work that requires empathy—understanding a customer's experience so you can design a better one, discerning what colleagues are thinking or feeling so you can collaborate with them to solve problems, interpreting the body language of a sales prospect so you can respond to what he isn't saying.

And yes, we can all get better at empathy. Start by assessing yourself. I like the Reading the Mind in the Eyes test (http://kgajos.eecs.harvard.edu/mite/) or my own assessment tool (www.roboeconomyquiz.com). Then, before, during, and after interactions, focus on how well you're discerning the other person's thoughts and feelings. Also start reading literary fiction. Even that simple activity has been shown to strengthen empathy.

If you'd like to here our full take on Humans Are Underrated before making your purchase, check out our Jack Covert Selects review of the book (which includes a link to the study of how literary fiction has been show to strengthen empathy, as Geoff just mentioned). 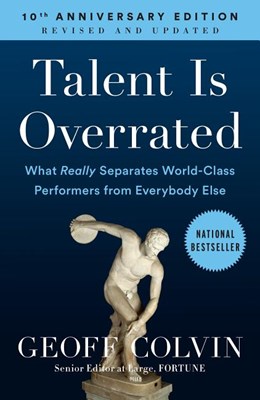 Talent Is Overrated: What Really Separates World-Class Performers from Everybody Else