Sofija Stefanovic has brought people together to hear immigrants’ stories at Joe’s Pub in New York City four times a year since 2017, and when the pandemic put a pause on live shows, she adapted thirty-six of her favorites into a book. 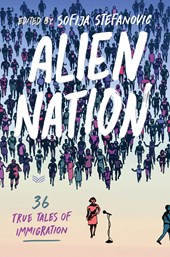 If you only had a few minutes to tell a story about your life, what would you say?

There’s something uniquely compelling and bonding about getting brief but expository glimpses into strangers’ lives. While our world may be more technologically connected than ever, it's also made it easier to cherry-pick the types of people we interact with. What I like about books like Alien Nation is that you can meet someone new in every chapter without having any time to presume anything about their life.

Sofija Stefanovic has brought people together to hear immigrants’ stories at Joe’s Pub in New York City four times a year since 2017, and when the pandemic put a pause on live shows, she adapted thirty-six of her favorites into a book. Some of the storytellers are published authors, including Cleyvis Nateria (Neruda on the Park, Spring 2022), Suketu Mehta (This Land is Our Land) and Xochitl Gonzalez whose forthcoming book, Olga Dies Dreaming, I have next on my list to read. And before you expect This Alien Nation to be a melancholic tour of small-minded America, there are plenty of glints of humor thanks to a handful of the comedian authors who expertly tell hard stories without losing human levity. The authors’ essays are windows into their wounds, their bonds, their accomplishments, their family WhatsApp groups, their fears, their scent memories, their Christian rap groups, and much more.

The patchwork of stories is curated to be consumed in sections, each one a different theme but all relating to sources of identity and acceptance. “The Nostalgia Bug” by André Aciman opens with an impactful paragraph describing the immigrant experience as one of being an eternal stranger:

When you’re a displaced person, there comes a moment when you realize you’re not just displaced. Or that this stretch of new land is not your home and may never be, or that the idea of home, or of a homeland, has now become a completely hollow, unfamiliar concept to you. The new home is unfamiliar, but the old home itself becomes ever more unfamiliar—especially once memory and imagination have started muddying the waters and have allowed the old home to drift further and further away from you.

This feeling of estrangement repeats across many of the stories, but the narrators’ defiance and bravery in the face of so much change is ultimately uplifting. America is filled with many people and many stories, and becoming enwrapped in so many lives in less than 300 pages is exciting and important. I hope readers go beyond just reading or relating to these stories and remember the empathy they felt while reading them when they pass strangers on the street. We may not look alike, live alike, or love alike, but we can certainly relate to the joys and pains in every life. (GMC)