Emotionally heavy, artfully told, and timely. I hope that you take any compassion you feel for these characters & redirect it towards others you encounter, strangers who could have roots just as rough, tangled, distressing, and difficult as all the characters you meet on the journey to reach American dirt. 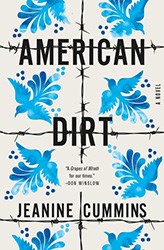 It's difficult to write about Jeanine Cummins’s book without giving anything away that wouldn't affect your experience with the story. But I will try! American Dirt is unlike any other book you've read. Nothing feels recycled. It feels real. Which, at times, is what makes it so disheartening to continue. Five pages in and I felt a cold stone of distress sink to my stomach. Be aware that there is some violence, but the most jarring moments are its aftereffects.

The narrator’s 3rd person, omniscient point of view reveals secrets that pain you to know, because they are kept from the main character, a courageous loving mother named Lydia Quixano Perez who is doing what she can to stay alive in spite of a horrendous event that would leave anyone with very, very little to live for. Her son, Luca, is a calm and serious presence despite being only eight years old. Lydia occasionally looks back on her life from two weeks ago, before she and Luca fled town leaving behind her book store, her clean house, her morning coffee routine. But Luca doesn’t reminisce nearly as much. He pats the cap on his head (a last keepsake from his deceased father) and soldiers onward. Each character works through grief in their own way. They grieve for the loss of many things: their past, their family, their normalcy. Because they know that where they are going is not always welcome either. And yet, when there are few options left, starting over is the best one can do.

Luca’s character isn’t the robust and energetic child I expected, and this division between one’s expectation and the reality is a central idea to the story. Luca reflects the innocence we all possess in times of terror, when we shut out reality in order to conserve what is left of our strength. And Lydia is the mother who must continue being a mother, not just for her son’s sake, but for her own. We can all relate to having or wanting someone whom we can be strong for.

“She doesn’t ask if he’s okay because from now on that question will carry a weight of painful absurdity.”

Poetic sentences recall vivid emotions, and I developed a deep empathy that I carried with me throughout the story, even sympathizing with the antagonists at times. Inner-conflict is a constant that feeds into the tensions of the book.

“Sebastian’s knowledge of the cartels was exhaustive, which both impressed and discomfited her. He knew things. Most people were like Lydia; they didn’t want to know. They tried to insulate themselves from the ugliness of the narco violence because they couldn’t handle it. But Sebastian was ravenous for it. A free press was the last line of defense, he said, the only thing left standing between the people of Mexico and complete annihilation.”

Every angle the story is told from feels like a distinct perspective with a distinct voice, but of equal importance in a story concerning illegal immigration. I don’t imagine that anyone who reads this book will tell their friends “it’s just about illegal immigration,” because that would discredit its strong sub-narratives of single motherhood, the bonds of friendship and family, survivor's guilt, sacrifice, what it means to be a victim, the daily struggles of losing loved ones too early, and the importance of hope. And of course, anyone who really needs this book in their hands will likely ignore it on the shelves, but I’m very grateful that it exists anyway.

Illegal immigration is more than just a news story or a concern of "them" vs. "us." It is a human story. And Cummins paints a full picture of a search for second chances. For some characters, this journey is self-started, while for others (like the main characters, Lydia and Luca) it is out of necessity. They are running for their lives: trading the danger of a vengeful cartel in their hometown for the dangers of traveling atop trains, sleeping in strangers’ houses, and fleeing from corrupt officers. I never knew what could come next in the lineup of fascinating characters and ever-changing situations, and I appreciated every moment of it. Putting a bookmark in felt like abandoning a friend in the middle of the desert. And certainly the ending is satisfying, but these are characters you won’t want to leave after the last sentence.

Cummins’s pacing is divine. Sentences run on feverishly during scenes of distress, the narrator illustrating the chaos and the characters’ inner monologues amplifying the action. And the less tumultuous scenes still feel like small reprieves from the next obstacle that Lydia and Luca must overcome. This mother-son team is not alone, luckily, and the way they connect with others is a beautiful reminder of the importance of community in our lives, especially during the most difficult times. Everyone is totally equal, though it’s easiest to see when we’re all in the same bad situation. Even young children can understand this, perhaps more profoundly than adults at times.

“[Luca] starts to understand that this is the one thing all migrants have in common, this is the solidarity that exists among them, though they all come from different places and different circumstances [...] each of them carries some story of suffering on top of that train and into el norte beyond.”

Another prominent duo are sisters, Soledad and Rebeca, who reflect the same support system dynamic as Lydia and Luca. The tough love between family members reminds me a lot of my own sister, but it could likely remind you of your brother, your cousin, or even your best friend. American Dirt makes it clear that the beauty of bonding with others is finding a space you can reside when you are otherwise homeless or feel displaced.

“There is no home. We’re going to make a new home. This is the only way forward, so we go forward. Adelante. No more crying now.”

I hope that you take any compassion you feel for these characters and redirect it towards others you encounter, strangers who could have roots just as rough, tangled, distressing, and difficult as Lydia, Luca, Rebeca, Soledad, Ricardín, Lorenzo, Beto, and all the rest you meet on the journey to reach American dirt.

The Author’s Note at the end of the book is equally as powerful, and I think a satisfying place to close out this review.

“As I traveled and researched, even the notion of the American dream began to feel proprietary. There’s a wonderful piece of graffiti on the border wall in Tijuana that became, for me, the engine of this whole endeavor. I photographed it and made it my computer wallpaper. Anytime I faltered or felt discouraged, I clicked back to my desktop and looked at it: ‘También de este lado hay sueños.’

But I do apologize for offending anyone by so highly recommending the book without mentioning my recent internal conflicts over the value of the story and rights of the author.

So here are my thoughts:

Cummins’s ethnic background is being put under a microscope to discredit her book, so I’m compelled to share that I am a woman of Mexican descent. I do identify as Mexican-American and Latinx. In some contexts this means nothing. In others it means a lot: scholarships, diversity quotas, the census. And for this, I think it means somewhere between nothing and a lot. But through hearing both sides of the debate over the author’s qualifications to tell migrants’ stories, I definitely feel less qualified to review American Dirt.

When I wrote about this book, I was totally focused on the strength of the storytelling and not the ethnicity of the author, nor did I expect it to encapsulate every Mexican immigrant’s experience. I did find it surprising that Cummins was Puerto Rican and Irish rather than Mexican, but as her Author’s Note states, she did four years of research and writing, and according to interviews, she met deported mothers, migrants, and others involved in the always-changing, never-the-same experience that is immigration. You can easily find further evidence of the time and effort she put into this book all over the internet just by searching the words “American Dirt.” I’m not trying to write something in defense of Cummins or in defense of the book itself. I’m defending the value of books that humanize those that have been dehumanized.

I didn’t expect a book that gave faces, voices, emotions, and stories to Mexican immigrants to be criticized in such volumes. I don’t doubt that there are more accurate works of fiction, but as she wrote in the Author’s Note “If you’re a person who has the capacity to be a bridge, why not be a bridge?” American Dirt has spurred huge controversy and garnered high praise, and these are both good, normal things. I regret writing such a hugely positive review, because I really believe that no book or situation or person is entirely black and white, and I now feel like I should have tempered my initial enthusiasm with at least some of the nuance that the debate around the book has created in my own thinking. I still hugely enjoyed reading American Dirt, but I am allowing it to be more of a bridge to other works on immigration than the only book on immigration anybody will ever need to read. (I recently recommended Marcelo Hernandez Castillo’s memoir, Children of the Land, as well, and A Long Petal of the Sea by Isabel Allende, which is also a story of immigrants and refugees.)

In many historical fiction books (which is what I consider this one), details are often enhanced to tell a more compelling story. When I read a book of historical fiction, I am consciously choosing not to read a history book, and I accept that the words and stories wouldn’t be quoted in a scholarly journal or essay. American Dirt is an engaging historical fiction—and could be considered a thriller—that redresses many Americans’ beliefs that Mexican immigrants are gang members, rapists, and criminals. And the story’s ability to emotionally connect the reader with migrants is commendable.

Every work of fiction is an instance of telling another’s story, and I find it hard to define who can do that or not. My own father immigrated from Mexico to the United States at 16 years old, and if I had written American Dirt, would this connection cause less controversy? Probably. But could I have written something as engaging, emotional, and empathetic as Cummins? Definitely not.