Weaving through the pages of this woman's life, you begin to understand how Joan came to be—maybe how any woman could come to be Joan. 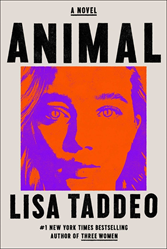 After writing her bestselling and unsparing nonfiction narrative of women and sex, Three Women, Lisa Taddeo brings another riveting story to the masses with her novel Animal. The protagonist, Joan, is a complex character who has experienced a life of suffering. After a traumatic and fatal “break up” with her unstable, obsessed boss, Joan escapes to the sunny skies of California to face the truth of what happened to her when she was little through a young woman named Alice—the one person in the world who can help with making her feel whole. The backstory that leads her there is emotional, and often troubling—a reminder that being a woman in this world can be difficult for many reasons, and what, when taken to extremes, that can do to an individual.

Through abuse, trauma, and negative sexual experiences and relationships, Joan has developed dark views toward men and a skewed perspective of how the world works. As a 30-something woman, she navigates through her life trying to find any scrap of love offered with no satisfaction or conclusion to her overwhelming need. Wandering through life believing her sexual prowess is her one advantage, she finds herself falling into bed with the seediest of men, the only kind she seems to be drawn to. A tale of survival, her story reveals what trauma and negative cycles can do to a person—how the rage it builds can seep to the surface. Through messy affairs, violence, and constant moves, Joan tries to find what she is looking for without knowing exactly what that is due to the impressions of her troubled past.

Animal reminds us that everyone has a story, and that everyone is seeking love, even if they don’t always know how to seek it in the healthiest of ways. A wild read to say the least, I had so many thoughts and feelings arise after completing it, and it was a book I couldn’t put down so that happened fast. Weaving through the pages of this woman's life, you begin to understand how Joan came to be—maybe how any woman could come to be Joan. It is a story not often told, or not told often enough, with enough understanding, made addictive in this case through Taddeo’s powerful writing style so that we’re compelled to listen.