When you learn enough about the beasts, you may be surprised to see a part of yourself reflected back. 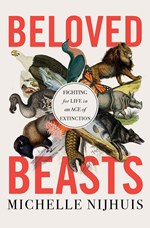 It's overwhelming—and often feels impossible—to keep up with the news surrounding COVID-19 and its variants. The details are sometimes made clearer, sometimes change, and sometimes don't feel applicable to us at all when we're mostly just staying home. However, when we widen our perspective, we can see how the longstanding issue of the anthropogenic impact on climate change and environmental degradation plays a significant part in this global pandemic. And—whether it’s the pandemic's effect on us, or ours on it—we can’t hide from either issue.

A friend of mine since kindergarten is a graduate research assistant studying epidemiology and population health at UW-Madison. She recently informed me that because humans continue taking over land for themselves, destroying animal habitats in the process, animals are being forced to live closer together as well as closer to humans, causing any zoonotic disease to spread faster amongst animals and making it more likely they will spread to people.

In this way, we are all linked, and each responsible for doing our part to protect the corners of the planet we inhabit. Not all of us want to acknowledge this, nor understand how one area of earth or one species of animal could affect our entire existence, but the likely origin and spread of COVID-19 brings it into focus. As does a new book by Michelle Nijhuis.

Nijhuis begins Beloved Beasts by describing how her research experiences in biology and as a journalist have shaped her understanding of how and why people do or do not work towards environmental conservation. She illustrates the controversy of conservation in a compact example from her research project of desert tortoise observation:

[M]y weird, dreamy job was surrounded by bitter and sometimes violent arguments over their future. What struck me was how deep these arguments ran; while people fought over how to give sanctuary to tortoises—which construction projects or public-land grazing leases to curtail, which off-road vehicle tracks to close—they were also fighting about why and even whether they should be expected to protect tortoises at all. In the red rock canyons that once sheltered the Ancestral Puebloans, in meeting rooms and courtrooms and small-town coffee shops, people were arguing over nothing less than humanity's proper place on earth.

To me, a life-long turtle enthusiast, it feels like there is no question that we should help every turtle cross the road safely and save every species from extinction. But deciding that an animal should exist is one thing, and actually working towards ensuring its survival is another. Beloved Beasts details the history of conservationists—from Nicholson Huxley (one of the founders of the World Wildlife Fund) to Garth Owen-Smith (an African animal conservationist) to Michael Soulé (a prominent proponent of biodiversity)—that have taught us the value of supporting symbiosis over the human desire for dominance.

It's interesting to read Beloved Beasts in the context of other environmental science books we've covered this year like Under a White Sky by Elizabeth Kolbert and How to Avoid a Climate Disaster by Bill Gates, which highlight the technologies that could be our best chance at survival amidst a climate crisis. They are persuasive, logical arguments, but Nijhuis counters with convincing pathos:

[W]hile new technology, from drones to cryopreservation to gene editing, may well assist future conservationists, there is still no shortcut through the difficult work of protecting living organisms and the places they need to survive. And there is still no substitute for the emotional connection with other animals and other species—the love of life that inspired the first modern conservationists and continues to sustain so many today.

The title Beloved Beasts reflects this argument: why should we give up human progress to save beasts—maybe deadly, maybe crude—that we don't fully understand? Besides being curious, conservationists throughout history “knew something about suffering, and they found consolation in the sights and sounds of other forms of life.” When you learn enough about the beasts, you may be surprised to see a part of yourself reflected back. It makes one wonder if human progress is possible if we do not save them. So many of us own pets that we treat well, if not better than ourselves occasionally. And this human-animal connection is what has kept so many conservationists passionate. However, the history of conservationists is filled with others who were divided between the comforts of what's-always-been and what-needs-to-be. For example, when the Audubon Movement began:

Membership was unified in its opposition to plume hunting, [yet] it was divided over protections for eagles, hawks, and other birds of prey. Some Audubon members were sport hunters who saw both mammalian and avian predators as threats to their own cherished pastime, and believed that both should be controlled by humans...

In the present day, it is clear that such control is elusive. As evidenced by the increase in zoonotic diseases and instances of wild animals prowling through urban neighborhoods as we stay inside our homes, we can see how intertwined humans' and animals' lives are. However, it's also quite easy to access information that inspires and informs conservation action in children and adults alike. When we recognize the importance of biodiversity, we will understand the greater benefits of practicing sustainability in our daily lives and in activism and volunteering. We really do only have ourselves (as in humankind) to blame for the pandemic, climate change, and environmental deterioration, but we also have great resources from experts—books, documentaries, articles, TED talks—to learn from and to help us hold each other to higher standards as we all work towards conserving the planet for future generations.