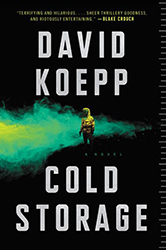 A zombie-like fungal epidemic unfolds as a retired bioterrorism operative, Roberto Diaz, tries to beat the clock before the entire human race ceases to exist. It’s the kind of suspense I geek out to. Seeing that the story’s author, David Koepp, has been the screenwriter of several major motion pictures— including my all time favorite, Jurassic Park—made me want to dive in immediately to see what intense, heart-pumping story he has concocted this time. I did, and it didn’t disappoint. Koepp’s Cold Storage is a thriller through and through.

The story begins with Roberto Diaz and Trini Romano, who were called on in the '80s to eradicate a fungal biohazard. When they travel to see what the fuss is about, they become witnesses to one of the most deadly bioterror threats the world has ever seen, and their goal is to make sure the wider world doesn’t see it. After burying a sample of the deadly fungus deep in the ground underneath an army fortress hoping it will never see the light of day again, we move to 2017, dragging the suspense over a thirty-year time period. Two young security guards, Teacake and Naomi, are at work one evening at a normally uneventful storage facility—yes, the aforementioned army fortress—and are about to experience the deadliest, most heroic night of their lives. The book’s narrator notes the chain of events:

There was a lot to review. The deer had been dead, there was no question about it. Same for Mr. Scroggins; the cat was missing half a face and skull. The notion of him surviving that kind of mutilation was laughable. That could only mean that something otherworldly was going on, something unholy. Whatever. The universe was a fucked-up place, with lots of shit he’d never understand.

My heart was pumping throughout the entire novel, hoping that Diaz, Teacake, and Naomi could save the world. Although the novel is a horror/thriller/sci-fi, it has whimsey and comedic expression throughout each exhilarating page. A moment that really gave the pumping heart a bit of a laugh was when Teacake and Naomi watch a dead  deer enter an elevator while they are trying to survive the rushing epidemic.

At that moment, the elevator doors binged and slid open. The deer turned, as if fully expecting that, click-clacked its way into the elevator, turned back around to face them, and, swear to God, it glanced up at the floor numbers as the doors slid shut.

Cold Storage is an incredibly riveting read, which had me entranced as soon as I entered the desert within the first few pages and was greeted by Roberto, Trini, and the deadly fungus that wanted to take hold of every living creature around it. It’s a very cool book. And, who knows, maybe someday it will give Jurassic Park a run for its money as a movie.