Commute by Erin Williams inspired our Digital Marketing Specialist, Gabbi, to reflect on collective feelings of loneliness and how to turn that vulnerability into strength. 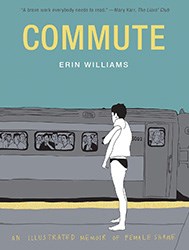 Erin Williams's dry humor disarms me immediately, and I chuckle to myself in a crowded coffee shop as I read from her latest graphic novel Commute: An Illustrated Memoir of Female Shame. Shame isn’t funny, obviously, but the way Williams writes so bluntly about her day, ending sections of the book with a seemingly arbitrary event or memory, makes me laugh. Especially when she pairs those moments with absurd imagery.

In one 4-part image, a hunched-over, business-suited man frowns at her as Erin takes a picture of a steel column in the subway tunnel. He holds the exact same sneer in three of the scenes, and in the last, his head is transformed, growing a hissing duckbill lined with teeth, a serpentine tongue flicking out at the back of Williams’s head. It’s a comical image, but represents a sadly relatable feeling of anxiety for lone women or young people: feeling judged or looked at when our backs are turned or when doing anything that might confirm a stereotype (i.e. taking selfies, ordering avocado toast, dying our hair). Even if others don’t judge us for these things, we continue to judge ourselves.

Williams lays out the difficulties of her day at the same level of nonchalance as its seemingly arbitrary details. For example: being accosted by exhausting memories of ex-boyfriends, noticing men ogling her in public, and being verbally harassed are described just as concisely as being constipated, watching a couple argue on the train, and ordering an egg and cheese roll. This style reminds me of something I say a lot: it’s fine. Even when it’s not fine. This might be a symptom of the other thing that women are prone to saying: I’m sorry. Even when there’s nothing to be sorry for. Female shame emerges in these (and other) cases in which we make light of our feelings and our problems, brushing off feelings of offense in lieu of “keeping the peace” or choosing not to “rock the boat.”

We must maintain the status quo. If not…

Each of us has a different interpretation of what comes after that dot dot dot, but whatever it is can only be quashed by each of us as individuals. 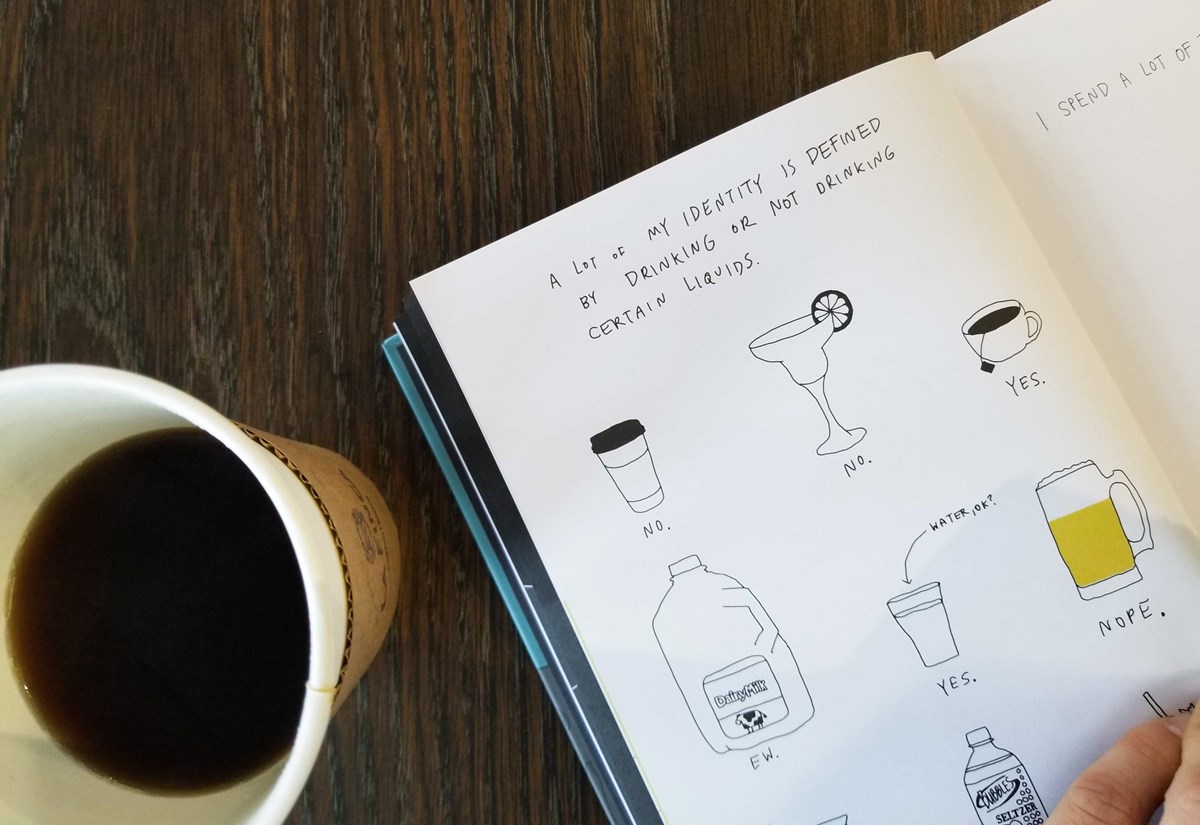 Williams concludes the book so wonderfully addressing her own journey of recognizing and overcoming this problem with assertiveness.

“We women doubt the reality of our own experiences.

The culture that defines us grabs onto the question of consent so that all other abuses of power are still at play.

It’s our stories against theirs.

Our trauma becomes our shame.

Shame is an instrument of oppression.

Show me a narrator less reliable than one who seeks to maintain his own power and control.”

Before this realization, though, Williams’s often sour outlook on the world is only broken by moments in nature, which, in this graphic novel, are pages splashed with vibrant greens and yellows. The lines are cleaner on these pages, almost like craft paper cutouts, and the layout feels overall more open than the standard style of the rest of the book: scribbled and scratched black and white line drawings, like sketches summarizing an experience often much larger than someone could encapsulate in a drawing. For example: a two-sentence description of what it feels like to be drunk is accompanied by the pale protagonist float-falling over a bed. The image connotes a feeling I can understand, but does it encapsulate drunkenness completely? Of course not. Does it matter?

Williams's bleak recollections remind me of the angsty young adult heroines I would read about in middle to high school. Teenagers (including myself) often develop a Me-Against-the-World mindset that we enjoyed seeing reflected in the books we read. Adults were the worst, so in those stories, Angsty Ally/Vanessa/Trish would be the youth saving everyone else from catastrophe while the reader rooted for her to fall in love with her best frenemy—which she did. And we celebrated and wept at the Afterward, even though we knew the basic elements of the end since the beginning.

Despite the similarities in alienated feelings, at this point in my life, there's something different about Commute than YA dystopian novels. Commute establishes a Me-Against-the-World mindset that clearly defines "Me" as a collective Me where every woman is Me, because when a woman is in public, no matter if she is with friends or alone, she is vulnerable not just to her interior anxieties and worries, but to the loud and intrusive masculine world that is often the origin of some of those interior anxieties. Women might fight for the same things, but when it comes down to it, it’s easy to feel very alone in our daily struggles. Williams describes this so powerfully fifty pages into the book while describing various people she recognizes on her train rides:

"It's important that I keep you here, on this commute. I want you to understand what it's like to be constantly reminded of what you are: desirable + visible or undesirable + invisible. With the first comes a constant + vague sense of threat. With the second comes loneliness. This is what it means to be a woman in public."

Things I've thought: Should I wear this; will it look good (to men)? Would this attract a (wrong kind of) man? Will leaving this place at this time be safe (from a dangerous man)? Will ordering this food make (the male) waiter think of me in this other way? Will doing this at the gym make (a man) say something to me? Will drinking this at the bar make the (male) bartender think badly of me?

I feel like a victim of my own thoughts, but really it's the thoughts (the statistics, the warnings, the prejudices) that others have hammered into my head or surreptitiously whispered into my ears for years. And Williams captures these worries perfectly with her graphic and textual storytelling that make it very clear how wrong and unhealthy these thoughts are. Commute highlights the need for change in our society and women’s views on ourselves fitting into this society.

At times, the line of exaggeration blurs and I laugh—and feel bad about it. Maybe her date really was that bad? Maybe it's that it felt that bad? Maybe this doesn't matter, because what's important is not always what you concretely did but how you made someone feel by doing it.

"I fight all day for control of my body, publicly and privately. For how I'm allowed to be handled and touched and looked at. For when I am allowed to shit and how and when to stop or risk fatness and undesirability."

Williams's feelings of invalidation will make any woman with the same unspoken anxieties feel validated. About men, about makeup, about motherhood and relationships of oppression and relationships that support and, overall, the importance of women supporting women. If any of these feelings sound familiar, I'm certain that you'll want to read Commute in as few as one or two sittings. But, as someone just introduced to the world of graphic novels, I can attest that taking your time with this one will hugely improve your whole experience of it. And if you're interested in further understanding why women might be upset about... anything, really, you'll find some insight in this book as well. Like the young adult dystopian books I described, the protagonist reveals much more than an angry outlook on life. Sink slowly into the story, and you'll probably laugh, cry, and understand Erin, yourself, and woman’s experiences in general more than you could have expected from a book you could probably read in one commute.