Sinéad Gleeson's essays remind us that pain can strengthen our bodies, minds, and relationships, offering a greater understanding of the glimmering pleasures of life. 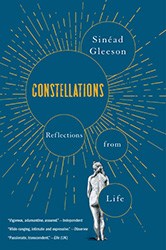 Sinéad Gleeson’s Constellations is equally as ethereal as the title sounds. Her voice is haunting and poetic as she reflects on her life and the hardships she’s faced without an ounce of petulance. There is a stoicism about her essays that could easily be intimidating, but Gleeson's careful words are so candid that they become much more maternal, which is fitting considering the book revolves around motherhood, femininity, and growing pains of several sorts. A cross between poetry, memoir, and history, we are offered fragments of Gleeson's life and experiences as they relate to parts of the body.

To many of us:

"The body is an afterthought. We don't stop to think of how the heart beats its steady rhythm; or watch our metatarsals fan out with every step."

We expect our bodies to survive slips and falls, fevers, freezing temperatures, high altitudes, and everything in between. Constellations focuses on the body, because Gleeson's body has been her focus (and that of doctors) since she was thirteen years old when she was diagnosed with monoarticular arthritis. Her pain mixes with tedium that translates into alienation as her peers are replaced by hospital patients. "I feel like an imposter, with trivial, chalk bones." This sentiment from her early life is echoed in her more recent life in an essay called "Panopticon: Hospital Visions":

"This may not be war, but there are two sides. The well and unwell; doctors and patients; staff and visitors."

"A patient is not a person.

A patient is a medicalised version of the self.

A patient is a hospitalised double of the body.

To become a patient is an act of transmutation, from well to sick, liberated citizen to confined patient."

"After two days I left the women's hospital and went back to this piece. Life and writing had been briefly interrupted by the body going off course."

Brief (and scary?) interruptions. She doesn't dwell on discomforts in the essays, and her narration is rather aloof. You could replace "I" with " she" and "my" with "her," and the tone would still be fitting. My reading of this tone is that it reflects the distancing required for coping with trauma, especially trauma at a young age. Even when describing the removal of a cast that covered two thirds of her body (which she describes having "sarcophagus heft"), her writing reflects the levelness of her current adult self rather than the dramaticism one would have in the moment:

"The pain feels like a scald, of heat spreading. I explain this to the orthopaedic doctor—this man I've never met—and he does that thing I'm used to male doctors doing: he tells me I'm overreacting. A rotating blade is slicing into my flesh, but I need to calm down. The room fills up with screaming. Me, as ventriloquist throwing pain across the room.

When my mother starts to cry, he demands that she leave the room."

This instance is one of many where feeling othered or judged becomes clear, especially as a woman. But there is also the recurring image of mother and daughter: despite how opposite they may seem sometimes, their similarities are much stronger. In the second story, Gleeson wonders about the absent memory of a wig she purchased in the 2000s when her hair fell out from chemotherapy. She moves on, replacing the questions of her past with the comforts of the present:

"Most days, I attempt one of the trickiest tasks known to humankind–brushing the hair of a reluctant small girl before school. [...] I scoop handfuls of her sweet-smelling hair–identical in colour to mine when I was her age–but refuse to call it 'mousy'.

The ebb and flow of pain and comfort continues throughout the essays.

I've got many of this book's pages tabbed, so here are some notes to finish up this review-that-could-continue-forever:

Gleeson has turned what could easily be discouraging diagnoses into something that is occasionally an annoyance, but is more so a binding force between her and her awareness of life. And I am so glad she shares this outlook so gracefully in Constellations. Illness, injury, and pain are brief interruptions in the already short timelines of our lives. We must accept them as such. There's so much more for us to exist for. 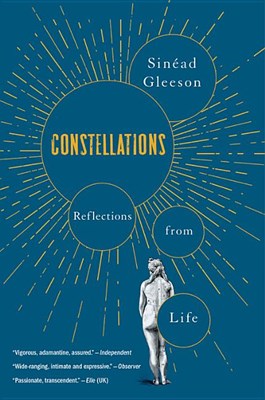