Tiffany Dufu helps us clarify what matters most—and what doesn't—so we can leverage our highest and best use at home and work. Tiffany Dufu is a superstar. Currently Chief Leadership Officer at Levo, and former president of the White House Project, she was also named to Fast Company’s League of Extraordinary Women, and served as a launch team member for Sheryl Sandberg’s Lean In organization. She is married with two children. She is an engaging and highly sought-after speaker. In every photograph, her Michelle Obama-esque biceps indicate the gym is not an infrequent part of her routine. She is the kind of person you read about, listen to, and mutter to yourself, “How does she do it all?” The secret is in her new book: She doesn’t.

Drop the Ball: Achieving More By Doing Less lets the rest of us in on the strategy Dufu and her husband have very deliberately crafted to split the never-ending to-do list of life. Spoiler alert: there’s just a lot of stuff they agreed wouldn’t get done. They learned to drop the ball, and be very okay with that.

The book takes the reader through Dufu’s personal history, to demonstrate how she internalized the messages that inundate most of us women from an early age: we are responsible for the majority of the tasks at home, that these tasks must be done a certain way, and that any neglect of these rules is a poor reflection on our essential character. It is a familiar narrative for many women. Dufu describes how her upbringing in the church modeled for her gendered expectations at community gatherings:

I remember these feasts of my childhood with great affection, but I also remember the gendered division of labor; in our church, women were the caregivers who cooked for, set up for, and served the men. Even as a little girl, it was clear to me that while women were central to making the church community function, their role was to serve.

This internalization of gender norms by both sexes only grew more pronounced during her increased participation in high school, when she encountered her first struggles as a female CEO-to-be:

But even with the freedom leadership afforded me at school, just like in church, being a girl leader meant being a worker bee. The boys were great at brainstorming homecoming themes, but the girls largely managed the logistics and details.

Any woman who has been the only person in a work meeting prepared with a pen and notebook knows the feeling of being the defacto notetaker, project manager, and mental holder of all the details. The executor of another’s vision.

Years of household-based resentments in a two-career marriage can built up without discussion, until one day Dufu found herself yelling at her husband in front of their child’s caregiver. For a woman who lived through much heated arguments before her parents divorced, she had always prided herself on not being a yeller. In creating a different tone for her home. It became a turning point in her quest to live up to the perfect home standards imprinted on her at a young age. Knowing she needed to find a new way to approaching her frustration, she reached out to trusted members of her network for some honest advice. She heard from them in unison: Slow down and prioritize. Get clear about what matters most to you, and the rest will fall into place.

With this in mind, she made time in her overflowing schedule to dedicate to that task. Stephen Covey's exercise of visualizing your own eulogy helped her clarify her life’s end point (“She was a true champion for women and girls.”), and another exercise to understand her “Reflected Best Self” helped her elicit insight from those who knew her best. Combining these two led her a crystal-clear set of priorities: loving Kojo (her husband), raising conscious global citizens, and advancing women and girls.

Armed with that clarity, she looked anew at all of the things on her to-do list. Which items fulfilled her “highest and best use” and aligned with those priorities? Some of them did, some of them didn’t. So what happens to those that didn’t? Does her husband do them? No one? The couple approached this by creating a master spreadsheet of tasks that needed to be done to keep the household functioning. Negotiating ownership of each one row by row led to many illuminating discussions about the work that we do that is hidden from those around us. The end result was clarity of ownership. And a lot of intentionally dropped balls; things they both agreed together that they were okay with not being a part of their daily concerns. No one can get mad at the other for something not being done, if you both agree you don’t care if it gets done. Communication is magic.

Dufu follows this up with chapters that outline the mentality of “delegating with joy” and creating an “all-in partnership”, along with advice for how to do all this in a way that builds mutual trust and accountability. The goal of this is for both partners to have the same time and ability to achieve their goals, and pursue their dreams. It is how we will have more women in more positions of leadership.

The upshot is that men who do laundry free women up to advance their leadership. Women who are freed from managing it all at home have more mental space to be strategic in their careers. They are healthier and have more stamina. They have more flexibility to travel and put in the hours required to achieve their next career milestones.

In addition to detailing the process her household went through to achieve their “all-in partnership” and chapters of trouble-shooting help, one of the undercurrents of the book (and indeed Dufu’s entire life work) is the value of a strong social network. Finding herself with two small children in New York and a husband who worked full time in Dubai meant she had to get creative about who helped her and how. Most of us are either too proud to ask for help or too stubborn to accept it. So it was doubly moving to read about her close friend who moved in for a year to help take up the slack. This generous and creative solution worked for both of them, and was only realized because Dufu had done the work (clarifying priorities, nurturing networks) to make it a reality. From older (“sage”) mentors and sponsors to peer mentors and mentees, her method of deliberately building and cultivating that network allowed her family to sustain a period of intense logistical hurdles.

We here at 800-CEO-READ talk a lot about gender issues within the business book genre, and advocate for an expanding of voices therein. One of the editorial goals we have set for ourselves is to not assume a male readership for our reviews or the books we judge in our awards process. While Drop the Ball is written most decidedly for a female audience, the book’s main message has value for all, regardless of gender, partnership, or parental status.

We talk about the demands on our time as if they are imposed on us and we have no choice [...] Every day, we let others dictate our experience. In small, subtle ways we give our time and our power over to others, when our time is the one thing we should protect and control.

If we all did the work to clarify what matters most to us, leveraged our highest and best use to achieve those goals, clearly negotiated task ownership, and regularly expressed gratitude to those around us, all of our relationships—at home or in the office—would be infinitely more sane. 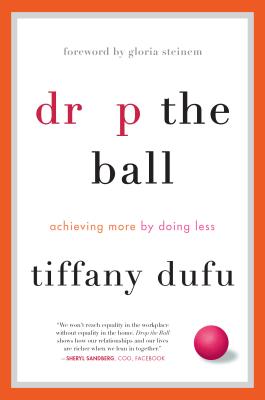