Niall Ferguson writes big books about really big topics—The War of the World: Twentieth-Century Conflict and the Descent of the West, The Ascent of Money: A Financial History of the World and The Cash Nexus: Economics and Politics from the Age of Warfare Through the Age of Welfare, 1700-2000, just to name a few. At first blush, his latest book, High Financier, seems different. It focuses on "The Lives and Time" of just one man, Siegmund Warburg.

Niall Ferguson writes big books about really big topics—The War of the World: Twentieth-Century Conflict and the Descent of the West, The Ascent of Money: A Financial History of the World and The Cash Nexus: Economics and Politics from the Age of Warfare Through the Age of Welfare, 1700-2000, just to name a few. At first blush, his latest book, High Financier, seems different. It focuses on "The Lives and Time" of just one man, Siegmund Warburg. But, what you may not know (what I certainly didn't) when picking up the book is just how big a life Siegmung Warburg lived, how close he was to so many events that shaped the world of the 20th Century, and how much he himself would come to shape the 21st. He came up in the South German countryside during World War I on the fringes of one of the most prominent banking families in Germany. He joined the family firm in Hamburg after The Great War, while the Weimar Republic was still in full bloom (which his uncle had a prominent position in), and spent time apprenticing with firms in New York in London during those days. Ferguson writes of those years with the desire and idealism of youth. It is in this section of the book that he speaks more of Seigmund Warburg's inner life. He begins the book speaking of Warburg's lifelong love of German literature, particularly Thomas Mann and the Warburg family's close resemblance to the family in Mann's Buddenbrooks—a clever and literary way to pull you into the world Siegmund Warburg grew up in. The example of Buddenbrooks also foreshadows what happens next, as Weimar Germany collapses into Depression and, eventually, Nazi Germany. The former nearly collapsed the family business, which became almost a moot point when the Nazis moved in and Aryanized the bank, removing his uncle from leadership and the family name (M.M. Warburg & Co.) from the business. Seigmund himself had already fled the antisemitism of Hitler's regime, taking his family to England to build his own firm, S.G. Warburg, which would eventually become a force that would, in it's own small way (through investment and intelligence), helped win the war effort and, in a very large way, shape post-war TransAtlantic and European finance. Ferguson had access to over ten thousand letters and diarie entries that have been unavailable to others before him, and he uses these often to show Seigmund Warburg's clarity of thought and unusually prescient reading of the political and financial winds of the time. And Ferguson simply knows how to write history, adding his own acute observations alongside those of Warburg. Consider the section on the similarity of the U.S. and German Depressions, and the huge disparity in their outcomes:

On the same day that Franklin D. Roosevelt delivered his first inaugural address ... another newly elected political leader gave a speech to another nation mired in the depths of the Depression. The second leader was Adolf Hitler and his speech ... though in some respects surprisingly similar to Roosevelt's in content, differed profoundly in its tone. [...] With the benefit of hindsight, we can see that Hitler's appointment was an event pregnant with future calamity not just for Germany but for the world—and particularly for the Jews of Europe. And we see that, for all the radicalism of Roosevelt's rhetoric (which explicitly blamed the Depression on unscrupulous financiers and threatened to override the power of Congress to combat an economic emergency), his New Deal posed no meaningful threat to individual liberties in the United States. [...] On 30 January 1933, Hitler was finally sworn in as chancellor at the head of a coalition government of Nazis and German Nationalists. Historians generally see the Depression as the principal cause of this political earthquake. ... Yet the historical puzzle remains: why did the Depression in Germany produce the Third Reich, while the other countries which were hit just as hard hit managed to retain democratic government and the rule of law? The rate of unemployment was nearly as high in the United States as in Germany in 1932; yet America voted for Roosevelt, who passed only two minor constitutional amendments in his twelve years as president, while Germans voted for Hitler, who overthrew not only the Weimer constitution but also the longer-established rule of law, deprived Germans of their political and civil rights, persecuted the Jews and other minority groups to the point of exterminating them and unleashed the most destructive war of modern times.

It is the ability to frame such questions that makes Niall Ferguson such an important author of financial history. He makes us aware of just how closely intertwined the history of economics and politics are, and what politics of hate and fear can do to a country (indeed, the world). And he does it all in an entertaining biography of what sounds to many like the most boring of topics—the life of a banker. 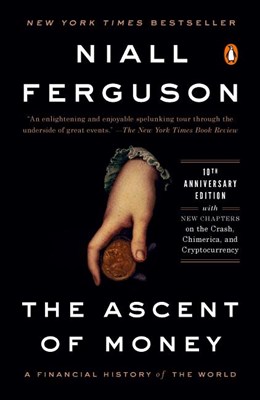 The Ascent of Money: A Financial History of the World: 10th Anniversary Edition