How High We Go in the Dark: A Novel

Beginning in 2030 and spanning generations beyond, Sequoia Nagamatsu’s How High We Go in the Dark tells the story of humanity trying to live in a world desecrated by an Arctic plague that spreads through contaminated water, changing the world as we know it. 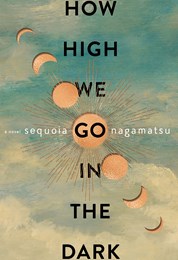 How High We Go in the Dark: A Novel by Sequoia Nagamatsu, William Morrow

Beginning in 2030 and spanning generations beyond, Sequoia Nagamatsu’s How High We Go in the Dark tells the story of humanity trying to live in a world desecrated by an Arctic plague that spreads through contaminated water, changing the world as we know it. Resurfaced from the distant past after an archeologic dig, the plague most morbidly targets children but infects adults as well—reshaping humanity.

Between falling in love with a patient that is soon to be a cadaver experiment, hotels for the dead, and robot dogs that keep your loved one's voices and memories, the novel offers a look into several lives, each chapter a different individual experiencing the plague and its aftermath spanning over a century after it shakes up the world. Coming to terms with his loss, an archeologist rushes to the dig where his daughter made a huge discovery just before her accidental death. A young comedian begins to work at an amusement park that helps terminally ill children experience fun as they pass and falls in love with a mother grappling with the emotional reality of it all. A young twenty-something man finds himself in a void after coming down with the illness along with hundreds of other souls trying to come to terms with their confusing situation and the lives they may be leaving behind. After losing his son to the plague, a scientist helping sick people receive organs from pigs finds himself with a talking pig that harbors deep emotion and thoughts. Another scientist, who lost his daughter and has developed a black hole in his mind while trying to discover a new Earth to house life, thinks:

I imagine my last words floating through the void. I wonder which shards of my life I’ll hold on to the longest—the singularity, the 49ers, gluten free, quantum, time? I’ll stare back at my colleagues, my wife, my son sitting beside my bed. Who knows how long I might live in this silence, the memory of my daughter fading. Who knows how long I’d live motionless, observing the world around me, contemplating the space and time Bryan Yoshio Iba Yamato has taken up in the universe.

It is in ways like this that the novel dives into the greater aspects of existence, what it means, and how it ties into the thoughts we hold in our heads. Nagamatsu shows throughout how the human spirit can remain strong even amidst incredible trauma, something we have learned throughout the last two years ourselves. The survivors, adjusting to their new normal of constant death and change, always have a glimpse of hope, trying to make the world and their lives better out of the trauma they have endured. As the world crumbles and loved ones die, as each character builds new friendships and lives as everything else around them seems bleak, we are offered many different lenses on the basic traits of humanity: survival and compassion for others. How High We Go in the Dark