The pressures associated with poverty and discrimination are more widespread, and more urgent, but that doesn’t mean that the pressures placed on more privileged children aren’t a problem or that they don’t have societal consequences—or that they shouldn't be talked about. 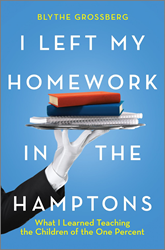 I Left My Homework in the Hamptons: What I Learned Teaching the Children of the One Percent by Blythe Grossberg, Hanover Square Press

Barron’s magazine reported last week that the richest human being in the world is no longer one of the Big Tech titans, but a man most of us have never heard of before: Bernard Arnault. What business could possibly cause him to outpace the likes of Jeff Bezos and Bill Gates? Well, Arnault is the founder and chief executive of a luxury goods conglomerate, Moët Hennessy-Louis Vuitton. From Barron’s:

Its brands include Louis Vuitton, Christian Dior, Bulgari, Tag Heuer, Sephora, Hennessy, and most recently Tiffany—and it’s had a fantastic year. […] LVMH stock has climbed more than 35% so far in 2021, and has surged 140% since its lows of March 2020.

Yes, it seems that as most of the world was weathering the greatest economic decline since the Great Depression, the ultrarich were splurging on luxury goods. It is a rarified air that most of us will never enter, a lifestyle we will never witness up close. Blythe Grossberg, however, has spent countless hours in the homes of New York City’s elite, as a learning specialist tutoring their children, and with the glimpse she provides into the casual excess of life on Fifth Avenue it’s not hard to imagine how luxury goods have fared so well. But she provides this glimpse with a sense of humor and bemusement—and a care and respect for the children she works with—that makes the book entertaining and enlightening rather than infuriating.

It is an opportunity as an educator that she clearly relishes‚ even though it comes on top of her day job working in an actual school and takes time away from her own family. And she is not the only one overworked and overbooked in the scenario. Just as the last year looked very different for the “one percent,” so too does their children’s education, and for all the advantages it conveys, it may not be as rosy a picture as it appears. It grooms them for the most prestigious universities, but it’s a high-pressure and overscheduled lifestyle that is a known risk factor for adolescent mental health. These overserved communities and the high-achieving schools they attend sometimes have rates of substance abuse and psychological disorders that are even greater than those found in underserved communities. Which is why Grossberg believes that:

In addition to tackling the poverty, discrimination, and trauma that affect many of our kids, we can also start dialing back the pressures on the young. […] Teachers, coaches, and administrators can also play a role in emphasizing decency and integrity over achievement.

The pressures associated with poverty and discrimination are more widespread, and more urgent, but that doesn’t mean that the pressures placed on more privileged children aren’t a problem or that they don’t have societal consequences. More than a glimpse into their homes and lives, Grossberg offers a glimpse into the psychology of the ultrarich that I haven’t seen so well revealed since Justin Farrell’s Billionaire Wilderness. Unlike Farrell, though, who keeps a scholarly psychological distance from the adults he writes about, Grossberg does become friends with the children she tutored. She wants to help them succeed not only at school, but as individuals—not only as individuals, but as a group. She offers suggestions for how to lower the pressure and improve their lives and education. It may seem less valuable to spend time wondering how we can help those who already have so much help and privilege than helping those who have little to none, but I think it is still important. She tells us how most of the students she tutored returned to New York after college to work in financial technology (or fintech) firms on Wall Street, writing that:

In my less charitable moments, I wish that the students who became beautiful writers weren’t all on Wall Street. I dream of going to a former student’s book-launch party, but that hasn’t happened yet.

Even if they’re not writing great novels and influencing the culture in that way, even (maybe even especially) if they end up working in fintech, surely her idea that “emphasizing decency and integrity over achievement” in their education would be beneficial to society. If we are ever going to change the culture on Wall Street, where so many of her students have ended up, and where success is measured almost exclusively in material wealth and the conspicuous consumption of luxury goods, perhaps changing the culture of the schools so many attend before landing there is the perfect place to start.