This small and powerful collection shows that the past remains present, and that we must fully recognize and reconcile with its influence on the present. 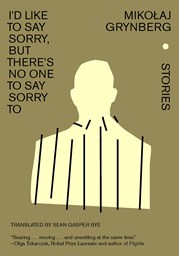 Mikolaj Grynberg’s new collection of stories from Poland focuses on the country’s Jewish population, on how the weight of the country’s past still looms large in contemporary life and in the minds and in the souls of its people. Grynberg has spent many years collecting oral histories from Polish Jews, and these fictionalized accounts present themselves as conversations with the author, including a confession from a non-Jew who admits to bullying Jewish children when he was young, who now wishes he could go back and apologize to them (from which the collection takes its name). Through these stories, Grynberg details the continued experience of antisemitism and cruel stereotyping in the country and includes the trauma that Jews experienced during the darkest time in their history, the Holocaust. Many people continued to hide that they were Jewish even after those events, and even from their families, to ensure they’d merely survive and to allow their children a chance to flourish and live without being tormented. One of these stories is about a woman who kept that secret with her until her 90’s:

You get older and your mind starts to dwell on things. As soon as that starts, there’s no going back. The train set off down the tracks...and took my world to the gas, but I didn’t go with it. Many survived to tell their stories, but I survived to not whisper a word for all these years.

Stories about the Holocaust are hard to read, but they have always drawn me in. Maybe it’s the sheer disbelief that we as humans can be so unbelievably evil, and the need to face that reality. Maybe it stems from the inspiration gained from the stories of survivors: what they have witnessed, their strength, how they pushed on somehow surviving while living through actual nightmares.

Some of us may think that our haunting past is fully behind us, that we have maybe even learned from history. Yet here we are pointing fingers at one another based on where we came from, what color our skin is, and what we believe in. Hopefully one day we do learn from history. So many innocents have perished horrifically due to prejudice, and too many continue to do so. And so many live with the trauma passed down to the next generations. This small and powerful collection shows that the past remains present, and that we must fully recognize and reconcile with its influence on the present.