Irresistible: The Rise of Addictive Technology and the Business of Keeping Us Hooked

Adam Alter shines a light on behavioral addiction, and re-orients our relationship with the technologies we live with every day. I’ve been pondering distraction a lot these days. Well, not exactly pondering, as that implies deliberate, concentrated thought—the very thing lacking in my life. Rather, as I bounce from task to task, it occurs to me that this might not be the most efficient way to get things done. Cal Newport’s Deep Work has been sitting on my desk for months, as I click open a never-ending stream of “must read” articles from trusted friends and colleagues about social media strategy, the power of corporate giving, and various diatribes about how the world may or may not be coming to an end. All saved for later (when I have time!), and all unread. And Newport’s manifesto on concentration patiently awaits my attention.

As I write this, I’m mentally fighting with incoming text messages about dinner planning, email read receipt notifications, multiple ongoing Slack conversations, and the knee-jerk impulse to check our company’s Twitter account for any urgent (ha!) messages. But I’ve just read Adam Alter’s Irresistible: The Rise of Addictive Technology and the Business of Keeping Us Hooked, and I’m beginning to think these distractions might be more like addictions. Has my brain become reliant upon the dopamine hits all of this technology provides?

The book starts with a big reveal: neither Steve Jobs nor Twitter founder Evan Williams, nor many other tech leaders, allow their children free reign on the products and services they create. Indeed, many of them ban their children from using them at all. The man who created the iPad, which entertains millions of children every day, withheld them from his own kids. And we should wonder why he made that choice. Alter believes he may have the answer:

It seemed as if the people producing tech products were following the cardinal rule of drug dealing: never get high on your own supply.

To look more closely at the emerging field of behavioral addiction, Alter breaks down his investigation into three parts, the first of which outlines the fascinating history of addiction, both chemical and behavioral. Starting 13,000 years ago with the discovery of euphoria-producing betel nuts in Southeast Asia, touching on Freud’s battle with cocaine, and ending with a look at heroin addiction amongst American soldiers in the Vietnam War. While some could rightly assume that soldiers turn to chemicals to relieve physical or psychological pain, Alter discovered a different truth in these soldiers’ stories:

Most war films ignore the fact that war is as much about boredom as it is action. In Vietnam, thousands of American G.I.s spent weeks, months, or even years just waiting. … Hugh Penn, a Vietnam vet, recalled that G.I.s passed the time by playing touch football, and drinking beer at $1.85 per case. But boredom is the natural enemy of good behavior, and not everyone took to wholesome, all-American pastimes.

Enter: the heroin labs of the Golden Triangle. In 1971, the “labs invited a series of master chemists from Hong Kong who had perfected a dangerous process known as ether precipitation.” The result of this change was a more addictive, 99% pure form of heroin, which made its way into the American military population to devastating effects. By the end of the war, 85% of returning G.I.s had been offered heroin, 35% of of all enlisted men had tried it, and 19% were addicted. Facing a potential 100,000 heroin addicts coming back to communities across America, President Nixon declared war on drug abuse and decided that addicted G.I.s needed to undergo rehab in Vietnam before they could return home.

A government-appointed researcher, Lee Robins, was charged with monitoring the returning soldiers. She discovered a staggeringly low relapse rate among the soldiers—only 5% as opposed to the standard 95%. How could it be possible that so few addicts were pulled back to such a highly addictive substance? It turns out that the chemical itself was only one small part of the addiction. Equally as strong is the environment in which the addiction took place, and rituals surrounding participation. After the soldiers underwent treatment, they returned to America and escaped the environment of their addiction. Alter explains how:

It turns out the environmental clues may be much stronger that the substances themselves. And that means that anything, not just chemicals, can be the center of an unhealthy relationship. Substitute heroin for your iPhone, and we now enter the world of behavioral addiction. Both of which, Alter explains, are rooted in filling a “deep psychological need in the short-term” but produce “significant harm in the long-term.” Is texting with friends harmful? No. Not until it starts to inhibit one’s ability to be attuned to social cues and learn empathy, which is widespread problem among teenagers and adults alike.

The second part of the book digs into all of the ways in which new technology is designed to fuel addictive behavior, which keeps people engaged longer, which leads to bigger profits to the companies involved.

In the same way the narrative around alcoholism for years was framed in terms of personal weakness, we tend to think that people should just make up their minds stop checking their email, scanning their Facebook feeds, and binging on Netflix series. Turns out, we are not weak; the system is rigged against us. Designers use multiple strategies (goals, progress, escalation, cliffhangers, and social interaction), carefully tested and retested with millions of users, to find optimal interaction (a.k.a. addiction) rates. Reading all of the ways in which the tendencies of our own brains are used against us is sobering.

In the last section, Alter outlines solutions to this problem, targeted to adults wishing to control their own addictions, parents looking to raise addiction-free children, and designers looking to change their participation in the industry.

Awareness of any problem is always the biggest hurdle on the route to solutions. One way adults can check their own addictive behavior is to install an app like Moment, which tracks how much time you spend on your phone (calls and music listening excluded). According to the app’s creator, Kevin Holesh, before people use the app, their guess of how much time they spend on their phones is 50% lower than actual. The average phone usage of app users is just under three hours per day. (Reminder: there are only 24 hours in a day.)

When you look at the app and find out you spend (hypothetically) 2 hours and 27 minutes on your phone yesterday *and* that you just (hypothetically) told your husband you “didn’t have time” to do that really important thing he asked you to do, you realize you (hypothetically, me) are a big fat liar. Don’t have time to write that novel you always dreamed of? Moment begs to differ.

But even if you awaken to the time spent and the dangers that await, what can be done? Can one simply decide to put the phone down?

Behavioral architecture acknowledges that you can’t avoid temptation completely. Instead of abstinence and avoidance, many solutions come in the form of tools designed to blunt the psychological immediacy of addictive experiences.

To this end, Benjamin Grosser created the Facebook Demetricator, which eliminates any numbers or metrics in your Facebook interface. Instead of seeing a notification that “10 people liked” your photo, you will see “People liked this.” Instead of “View all 7 comments,” you will see “View all comments.” That one change makes a huge difference to your brain, which is no longer addicted to the increasing tallies:

You learn that people like your post, that it’s been shared, and that there are comments, but you can’t fixate on the numbers because they’ve vanished. The Demetricator does exactly the opposite of what Fitbits and Apple Watches do… Numbers can be useful when they illuminate hidden processes, but they’re also dangerous because they encourage us to ignore our instincts in favor of objective feedback.

This is only one of many examples in the book illuminating the decisions tech designers make that either encourage repeat behavior (thus leading to further company profits) or insert speed bumps that give our brain an out in the feedback loop.

There are also choices we can make about where we keep our technology (is it always within reach, available for mindless interaction?) and what we choose to buy in the first place. One highlighted researcher advocates becoming more intentional with our technology choices, and creating barriers to unlimited use. She purposely does not buy newer (ie. smaller and faster) phones and computers, thereby inserting a degree of frustration with the technology, which naturally limits the amount of time she chooses to spend on it.

And while after reading this book (and the latest Wikileaks dump of CIA spycraft), one might be justifiably freaked out by the power of the phones, televisions, and computers in our life, instead Alter leaves us with a healthy self-awareness and a hopefulness for the future of tech:

We can’t abandon technology, nor should we. Some technological advances fuel behavior addiction, but they are also miraculous and life-enriching. And with careful engineering they don’t need to be addictive.

Neither alarmist nor utopian in his approach to the subject, Alter’s Irresistible re-orients our relationship with the technologies we live with every day, and serves as a call to action for those designing them. 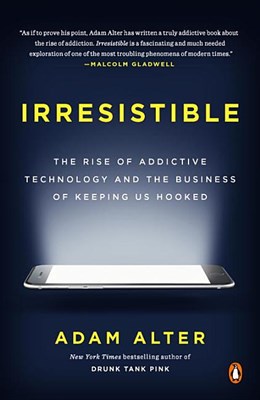 Irresistible: The Rise of Addictive Technology and the Business of Keeping Us Hooked