Todd's post on Monday showed that we've referenced Chris Anderson's Long Tail more often than any other title in the past, so we obviously like the book. But what books does Chris Anderson like? Well, he liked David Weinberger's Everything is Miscellaneous enough to write a blurb for it.

The world is messy, like it or not, and it's only going to get messier as the web destroys rules and rule makers. You can either complain about the chaos and wish for the good old days of order, or you can read this book and understand why delirious disorder will soon make us all smarter.

I took Chris's advice and read the book, and I really enjoyed it. One of my favorite chapters is entitled Social Knowing, in which he discusses the differences between Britannica and Wikipedia.

The trust we place in Britannica enables us to be passive knowers: You merely have to look a topic up to find out about it. But Wikipedia provides the metadata surrounding an article-edits, discussions, warnings, links to other edits by the contributors-because it expects the reader to be actively involved, alert to the signs. This burden comes straight from the nature of the miscellaneous itself.

Give us a Britannica article, written by experts who filter and weigh the evidence for us, and we absorb it passively. But set us loose in a pile of leaves so large that we can't see its boundaries and we'll need more and more metadata to play in to find our way. Deciding what to believe is now our burden. It always was, but in the paper-order world where publishing was so expensive that we needed people to be filterers, it was easier to think our passivity was an inevitable part of learning; we thought knowledge just worked that way.

Increasingly we're rejecting the traditional assumption of passivity. For ten years now, customers have been demanding that sites get past the controlled presentation of "brochureware". They want to get the complete specifications, read unfiltered customer reviews, and write their own reviews-good or bad. [The web site for the movie The Da Vinci Code made a point of inviting anyone to discuss the religious controversy of the film; by doing so, the studio reaped media attention, marketing buzz, and audience engagement.] Citizens are starting not to excuse political candidates who have web sites that do nothing but throw virtual confetti. They want to be able to explore politicians' platforms, and they reward candidates with unbounded enthusiasm when the candidates trust their supporters to talk openly about them on their sites.

In a miscellaneous world, an Oz-like authority that speaks in a single voice with unshakable confidence is a blowhard. Authority now comes from enabling us inescapably fallible creatures to explore the differences among us, together.

And this is how he ends the chapter...

For 2,500 years, we've been told that knowledge is our species destiny and calling. Now we can see for ourselves that knowledge isn't in our heads: It is between us. It emerges from public and social thought and it stays there, because social knowing, like the global conversations that give rise to it, is never finished.

There was a fascinating conversation about all this between David Weinberger and Andrew Keen, author of The Cult of the Amateur, that Todd linked to in a previous post. if you missed it the first time around, I'd highly recommend it. 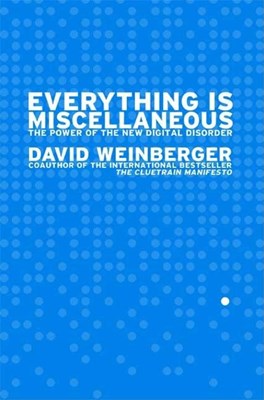 Everything Is Miscellaneous: The Power of the New Digital Disorder