Indra Nooyi did not set out to write a memoir, but it is one of the best we've read from a CEO. Grounded in her life's experience, it also transcends the story of her life alone and explains how we can create a larger culture of care for everyone. 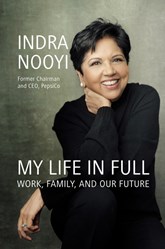 My Life in Full: Work, Family, and Our Future by Indra Nooyi, Portfolio

Indra Nooyi told everyone she wasn’t going to write a memoir. She wanted to devote herself to writing a “manual for fixing how we mix work and family.” It is a topic she has had occasion to think about, and been asked to address, more often than her male peers. Among the group of global leaders she regularly found herself in the room with after she became CEO of PepsiCo, she discovered that the conversation got around to many topics, even as far-flung as “flying to Mars,” but:

Family—the actual messy, delightful, difficult, and treasured core of how most of us live—was fringe.

Once she sat down to write that book, however, she found that the work she wanted to do on the topic had already been done, “from every angle, in every corner of the world.” Her recompiling the evidence about the economic benefits of early childhood education or paternity leave, she discovered, wasn’t really needed. But what she has experienced, and how she came to understand the issues on a personal level, and telling her story as one of the first generation of women to attend business school in India, as the first woman of color and immigrant to lead a Fortune 50 company in America? Well, that certainly hadn’t been done before, and only she could do it. I am so glad she did, because the book is really good. Reading about her childhood in Madras, her family (especially her reflections on her mother and grandfather), her education, the cities in India it took her to and what they were like at that time, and even the rooms she grew up in, is all endlessly entertaining. She recounts the story of her learning guitar (at first, against her mother’s wishes) and starting a band in high school, the LogRhythms, the only girl group in Madras at the time, and of the moment after retiring from PepsiCo when she and her husband decided to hang some of the “twenty or so guitars” she had acquired over her life and career—including “acoustics signed by the Chicks and Blake Shelton”—on the wall of their home. Similarly, you’ll learn about her tenure at PepsiCo, of course, about her purpose-driven, performance-oriented leadership philosophy and strategy, but also about her first job out of business school selling thread door-to-door for the Alexander Thread division of Mettur Beardsell. It was there, she writes:

I learned that business is done a few spools of thread at a time and that I owed my customers a duty of care. They were buying my product—and my word—and I had to listen carefully and deliver for them.

True to the book she originally set out to write, she also addresses that “duty of care” much more widely, and the duty we as a society have to build in more support and greater care infrastructure for working people—specifically women—and their families. Such a focus on care is not only the right thing to do but will “be a competitive advantage for every company, community, and state where we make it happen.” And with people like Indra Nooyi committed to it, maybe we finally can make it happen.

Dylan Schleicher has been a part of Porchlight since 2003. After beginning in shipping and receiving, he moved through customer service (with some accounting on the side) before entering into his current, highly elliptical orbit of duties overseeing the marketing and editorial aspects of the company. Outside of work, you’ll find him volunteering or playing basketball at his kids’ school, catching the weekly summer concert at the Washington Park Bandshell, or strolling through one of the many other parks or green spaces around his home in Milwaukee (most likely his own gardens). He lives with his wife and two children in the Washington Heights neighborhood on Milwaukee's West Side.