This is what Option B offers: for the grieving, a guide to recovery and resilience; for the empathetic, a guide to responding and respecting others whose life stories we can’t pretend to know.

The grind of time I'm not keeping up with
The leaf on the ground pokes at my slumbering grief
Walking around severed lumbering
But slowly sovereignty reasserts itself
I don't want it though
And betrayal winds
Who and how could I
Live?

Mount Eerie, “Forest Fires,” from the album A Crow Looked at Me

In any writing workshop, aspiring writers are reminded of the narrative arc.

Inevitably the instructor’s preferred visual representation of this arc will be included in the course materials or crudely drawn on the whiteboard at the front of the room. (Some might look like a pyramid, others a bell curve, but the basics stay the same: ramp up slowly, peak, quickly decline.)

Also in most writing workshops, the instructor will then tell you some version of this idiom: you have to know the rules to break the rules. Then she will go on to give you a list of her favorite stories, or novels, or authors who are best at breaking rules, as exemplars of this expertise in toying with form.

Most writers will then go cockily into their next writing project thinking, Okay! I know the rules so now I can break them, and by doing this, I can show off my skill, or my irreverence for rules, or my singular creativity, etc. But of course, it’s not that easy. We humans are hardwired to respect the narrative arc.

Writing or living, we want what’s around the corner to be exactly what we’ve envisioned. We comfort ourselves by believing that our lives are a predictable climb from being to having before we get to the whole losing part in due time, that we just might be that lucky.

But the arc of a life is more accurately represented by the crests and troughs of waves moving over time. Up, down, with variations in amplitude, wavelength, and frequency. Each of us with our own patterns. From the outside, it can often seem that other people’s lives are all gain. (Google some version of “perfect life on social media” and you’ll get endless results reflecting on this phenomenon that really just mimics how we often see others as having a smoother ride than us in our jalopy of a life.)

But a closer investigation reveals some amount of disappointment and loss and tragedy in every life, displacing the upward arc of anyone’s life story multiple times over decades. Surviving each is a story unto itself.

“I think that every day that we live is a day stolen from death.” Sheryl Sandberg, while on vacation in a paradisiacal locale, took an afternoon nap, searched for her husband when he hadn’t arrived for group dinner, and found him dead in the hotel’s gym. At that moment, the elements of her life veered wildly outside expectation, beyond prediction, and she was left to reconstruct her life’s story. And that’s the story she tells in her new book, written with Adam Grant, Option B: Facing Adversity, Building Resilience, and Finding Joy.

The introduction of Option B reads like a straightforward memoir. Sandberg reveals the devastating assault on her life that occurred without warning, telling us about the heart-wrenching experience of finding her husband, of her final visit with his body, of explaining to her children their father was dead. But the book as a whole is less occupied with telling a grief narrative than it is treating her trauma as a launch pad.

And so began the rest of my life. It was—and still is—a life I never would have chosen, a life I was completely unprepared for. The unimaginable.

In this way, like Sandberg’s life, Option B flouts a traditional narrative arc. The falling action after the climax leads, rather quickly in this particular telling of her story, to rising action again, and as all people who grieve know, no true resolution.

Since I lost Dave, I have at my fingertips this unbelievable reservoir of sadness. It’s right next to me where I can touch it—part of my daily life.

How to live again with that kind of pain as her companion is the journey this book recounts. Sandberg’s personal story is woven through like a red thread, offering up her life as exemplar for all of us who will, at some point in our lives, need a map to get out of our own rock-bottom. This is what Option B offers: for the grieving, a guide to recovery and resilience; for the empathetic, a guide to responding and respecting others whose life stories we can’t pretend to know. How did she resurrect her life after such devastation? How does anyone?

And for the first time I understood the shape of my grief, I could feel exactly how big it was. It was the strangest feeling, like holding something the size of a mountain in my arms.

Helen Macdonald, H Is for Hawk

In most memoirs, the climax isn’t a mystery; readers will know the reveal from the jacket copy. All things were going to plan, until… I was at work, another boring day, and the phone rang… It was just another rainstorm, until the black clouds rapidly moved in and I heard the sound of a freight train advancing.... I was sitting in class, and my father’s pastor is suddenly standing in the doorway of my 7th grade classroom… These are singular plot points, what happens around them is a life.

There was a time when I read memoir voraciously to better understand how people make it through. It doesn’t matter what the trauma, I wanted to witness the rise, I wanted to believe I too would have it in me to take another punch and live to fight another day. I would store snippets of each writer’s reflective wisdom that strikes me as lovely, or as sound, or as a useful guidepost via screenshot on my computer, or handwritten in a journal, or on a napkin in the car. I began this kind of reading, reading as mapping, reading as relating, reading as identifying myself through others since my mother died when I was 12, when my father’s pastor did arrive at the door of my classroom.

Twelve is a young age at which to begin to hoard wisps of wisdom like a bird who snaps up a loose bit of yarn, a tuft of fur, another bird’s feather to line her nest in preparation for the colder months to come. But I did. My favorite was called Joni: An Unforgettable Story, and was about a teenager paralyzed after diving into a shallow lake. (As with most of my mother’s books, God played a central role in that particular tale.) Another story I remember reading again and again was in one of those Reader’s Digest compilations, about a couple who survived after their boat capsized on the ocean. What we receive from these books is simple: we want reassurance that we can survive.

“A single person is missing for you, and the whole world is empty.”

When tragedy lands a blow, the disorientation is profound. The ground drops out from under our feet; gravity releases its pull; up is now down, and the ceiling the floor. In the face of such surreality, people need something foundational to cling to. In addition to Sandberg’s personal narrative, Option B retells other stories of survival, brief reminders that ordinary people are capable of crafting a new narrative despite, no, because, of their grief.

Sandberg’s story of resurrection from tragedy is a particularly necessary voice for professionals who have invested so much in making a life with all the protections assumed by love, money, status. While the hybrid nature of the book might not allow for intimate knowledge of Sandberg’s experience, the multitudinous stories of resilience will unite all readers.

Along with shared hope and experiences, shared narratives can build collective resilience. Narratives might sound “light”—how important can a story be?—but they are how we explain our past and set expectations for our future.

Still, the effort takes fortitude and perspective, and both Sandberg and Grant hope to offer a way forward through well-chosen inclusions of research, statistics, and some psychological methodology. Here is where Adam Grant’s expertise comes in. Grant is a quiet contributor to the book, just as he was a trusted voice in Sandberg’s ear as she strove to find level ground. The experience is Sandberg’s, the perspective is Sandberg’s, but the steps toward recovery are built upon Grant’s wise advice.

I thought resilience was the capacity to endure pain, so I asked Adam how I could figure out how much I had. He explained that our amount of resilience isn’t fixed, so I should be asking instead how I could become resilient. Resilience is the strength and speed of our response to adversity—and we can build it. It isn’t about having a backbone. It’s about strengthening the muscles around our backbone.

All this makes Option B an unusual hybrid, part memoir, part self-development manual. Embracing a new way of life first means deciding it’s time to do so, and not letting the grief overwhelm the desire, or even the right, everyone has to pursue what’s next.

Allowing ourselves to be happy—accepting that it is okay to push through the guilt and seek joy—is a triumph over permanence.

Moving forward includes finding new ways of raising our children, relating to other people, functioning productively at work, finding new hobbies, welcoming new loves, striving for a vibrant life. And Option B dedicates a chapter to each of these pursuits with Sandberg as model. How do we begin to tell our new life story? By living it .

Option B reassures us that after each crashing wave, we are strong enough to rewrite our story. After all, an “Option B still gives us options.”

“It’s not the weight you carry

but how you carry it—
books, bricks, grief—
it’s all in the way
you embrace it, balance it, carry it

when you cannot, and would not,
put it down.”
So I went practicing.
Have you noticed?

Have you heard
the laughter
that comes, now and again,
out of my startled mouth? 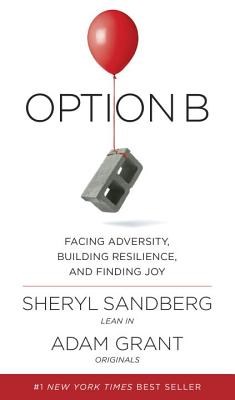