Nick Hunt’s slow-paced walking travels allow him to take his time unpacking the many layers of history that surround him on his journeys, transitioning smoothly from his viewpoint in-the-moment to a much wider perspective temporally. 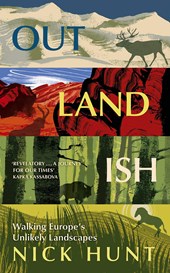 Nick Hunt is an exceptionally perceptive observer, his new book Outlandish showing how a careful eye and astute knowledge of the natural world and the origins of each of its elements leads to a deeper felt existence and connection to our planet.

In the book, Hunt walks through four distinct landscapes—Scotland's Arctic, Poland's Jungle, Spain's Desert, and Hungary's Steppe—sharing what he sees, hears, and feels as he discovers the beauty of the exotic worlds close to home. Maybe adventurousness runs in the family, since Hunt's great-uncle was John Hunt, the leader of the first successful expedition to Mount Everest. But what distinguishes Hunt’s latest travels from his great uncle’s is, simply, the many years between them. That is, the many years that humans have spent not doing more to prevent glaciers from melting and creating ice avalanches has redefined the experience of travel.

Exploring nature now is nothing at all like it was in 1953. Besides the improved navigational tools and more accessible information, it is also heavier on one’s conscience nowadays to consider the ways that travel lends to the environment’s degeneration. This is why Hunt decides to explore areas within Europe, only a train ride away versus a plane ride, which has been cited to cause as much CO2 in one flight as one person does in a whole year. The ability to travel long distances by train for a generally low cost is only one reason I was so enamored by England the two times I’ve traveled there. And it makes the continent feel very connected, which is why discovering the lesser-known landscapes present in Outlandish is so fascinating.

The most immersive aspect of Hunt’s writing is his unpacking of the many layers of history that surround him on his journeys, transitioning smoothly from his viewpoint in-the-moment to a much wider perspective temporally. He chronicles the semi-domestication of reindeer in Scotland, the Sanskrit origins of the word "Jungle," the depopulation of the Tabernas desert region of Spain since the late 1400s, the origin story of Hungary's three nomadic tribes, among many other histories. He borrows perspectives from scientists, poets, and other travel writers to not just complete the picture of the wilderness but compare what he sees to that of past generations.

His book highlights how quickly words relating to nature are diminishing in prevalence while concepts about climate change are quickly becoming more commonplace and urgent. Our situation has been elevated from "global warming" to a "climate emergency." And there is now a word for the depressive feelings caused by climate change: solastalgia. Hunt highlights this feeling several times throughout the book as he shares his thoughts on the world around him, thoughts that quickly snowball from a small observation to a bleaker, looming realization:

In this age of climate crisis, all definitions are breaking down. The retrenchment of the Arctic is not just a line of latitude; if the word is taken to mean summer temperatures of below ten degrees, what happens when it surpasses that? The northernmost regions of the world are heating at twice the rate of anywhere else on the planet. The Arctic will not be arctic soon, as the Alpine will not be alpine. In Siberia, millennia-old permafrost is melting seventy years earlier than the worst-case predictions. No longer perma. No longer frost. An end to permanence.

I had to look up quite a few names of plants, tools, Gaelic deities, and European towns and natural areas, which is part of what makes reading this book feel so expansive and exciting. The grandiose world-building of fantasy novels has nothing on the world-exposing stories of Outlandish. I'm genuinely taken aback by the scenes that Hunt describes trekking through. And the black and white maps before each chapter also make it hard to remember that the places I’m reading about aren’t fictional.

To me, one of the book's most affective conversations about the grand disaster that is global warming comes from a German bird-watcher in Hungary who, late at night after a good amount of homemade wine, confesses to Hunt:

And then, more succinctly:

"These places...these places on the earth...there are getting less of them. And no one seems to care. The birds are all leaving and no one cares. What can we do?"

I wish I also had homemade wine in my system to soften the severity of this question. But, for now, I’m content with continuing my Outlandish inspired travels, observing the world more keenly and encouraging others to treat the planet more thoughtfully. 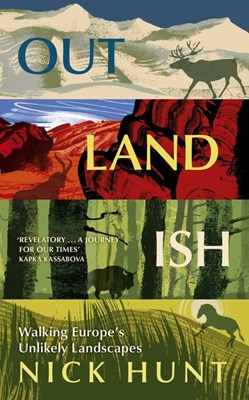