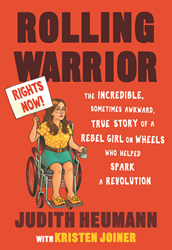 In Rolling Warrior, Judith Heumann conveys the epic tale of the rise of the Disability Rights Movement through her eyes. It is hard to believe that at one point in time, not too long ago, there were no ramps into buildings or onto sidewalks, a lack of educational opportunities and endless discrimination against individuals with disabilities. This story, written by the woman who helped lead the movement and change the law, along with millions of individuals lives, is one everyone should read and educate themselves about.

Judith Heumann writes about her experiences living in a world made to ignore her and people like her, and how she sparked a revolution. Denied her teachers license, treated as though she were “sick” and not given the proper education extended to other children, Judith began her fight for equality for people being ignored time and time again.

The regulations of Section 504 of the Rehabilitation Act were not being implemented, and the community of individuals with disabilities had had it. In 1977, on April 5th, the coalition took action and began a sit-in at the Federal Building in San Francisco that lasted until April 28th when the regulations were finally signed and changed. This only happened because Judith and other protesters demanded their basic and everyday human needs be met.

My stomach wrenched. A fleeting vision passed in front of my eyes: me, thanking person after person for helping me up a step into the bathroom. I was so tired of being grateful for being able to go to the bathroom.

We have compromised our whole lives,” I said, trying to keep the edge out of my voice. “And we’re so close now to winning.”

She went on to fight for individuals with disabilities around the world, to make sure they were being seen by their government.

This inspirational book shows how one individual made a huge impact on the world and made a difference nationwide. Judith’s story, like so many others, shows us the power of speaking up and the power of community.

How many times had I been blocked from going somewhere? Told I couldn’t get in? Told’ “No not you”?

Rolling Warrior gives you a look into the life of a woman who sparked a revolution as if you were with her during the entire historical moment. A must read for everyone.