Seth Godin is a revolutionary—in the best sense of that word. Consider his message at the beginning of Insubordinate—his new(ish) addendum to Linchpin. The opportunities to make change are bigger and more attractive than ever before.

Seth Godin is a revolutionary—in the best sense of that word. Consider his message at the beginning of Insubordinate—his new(ish) addendum to Linchpin.

The opportunities to make change are bigger and more attractive than ever before. Our leverage is more easily available, cheaper and more powerful too. Our job as linchpins, then, is to lead the way, to organize and connect people so they can overcome the resistance and actually do something with the huge advantages our society has given us. If you're reading this on a Kindle or a laptop or an iPhone, it's pretty clear that you're literate, intelligent and by almost any measure, rich. What are you going to do with that headstart?

Insubordinate is about some of the linchpins Seth has known in his life. It's about people with a bias for action. It's about publishers, teachers, those that ship and one man that runs a service station. It's about Chip Conley, Jacqueline Novogratz, Alan Webber, Bill Taylor and many more. It's about people who have overcome the resistance to new ideas and movements—that have, in fact, spawned them. It's about people who are insubordinate to fear and the status quo. Writing of Shepard Fairey, Seth writes "When you do a personal act, a human act, and change someone else for the better, then you're an artist." Seth Godin is an artist. His 50th birthday was earlier this month. He gave it away to charity:water, and has raised $35,000 so far from over 600 people. Every penny of that will go directly to help develop safe water projects in developing nations, and you can still help them reach their goal. Seth Godin is, of course, Insubordinate. 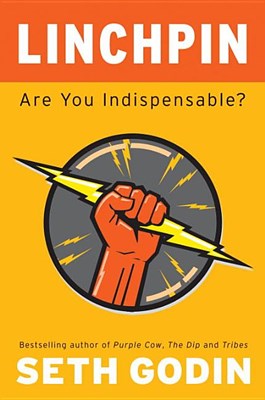