Before I begin telling you about the book, though, I'd actually like to digress briefly into the comedy of Louis CK.

I first heard of Louis CK when our programmer forwarded an appearance of his on Conan O'Brien. He talked mostly about how amazing things are in the world these days, and how impatient, ungrateful, and unhappy people are in spite of it, or perhaps because of new expectations, and a sense of immediate entitlement and impatience with new technologies that help make it amazing. There's a great bit on cellphones, of frustratingly waiting a millisecond for the signal to return from space, when a generation ago it took longer to dial a single digit on a rotary phone, but the kicker was about air travel. "People ... say there's delays on flights. Delays? Really? New York to California in five hours. That used to take thirty years to do that, and a bunch of you would die on the way there and have a baby. You'd be a whole different group of people by the time you got there." What I love about CK's comedy is his ability to get so quickly to the bigger picture truth of the matter, to wipe away the personal, and probably petty in the overall scheme of things, inconveniences of everyday life and point to a larger, more positive truth. He does it sarcastically, hyperbolically, and even a bit cruelly at time, but that's what makes it funny, I suppose.

I bring this up because what Louis CK did sardonically and comedically for air travel in that bit—strip away the rote, aggravating aspects of air travel and point us again to the exceptional nature of it—Mark Vanhoenacker does more softly, in beautifully written prose bordering at times on the poetic, in Skyfaring. The book in one way reminds me of Anthony Bourdain's Kitchen Confidential, not because the style or tone are similar—they're really not, Bourdain is closer to CK—but because both are so infectious with passion and enthusiasm for their work that they kind of make me wish I'd had their jobs. I've never really had any desire to work in a kitchen or a cockpit, but while wrapped up in the pages of the book with them, listening to their stories, learning and lingering in the language specific to their realms, it seems as if they are living the best possible lives.

And, like Bourdain, the writing is superb. I was hooked from the first paragraph:


I've been asleep in a small windowless room, a room so dark it's as if I'm below the waterline of a ship. My head is near the wall. Through the wall comes the sound of steady rushing, the sense of numberless particles slipping past, as water rounds a stone in a stream, but faster and more smoothly, as if the vessel parts its medium without a touch.

And he reeled me eight pages later with this beautiful description of his in-flight break ending, and re-emerging from the aircrew bunk to get his bearings and land the plane:

A chime sounds in the darkness of the 747's bunk. My break is over. ... I open the door that leads from the bunk to the cockpit. Even when I know it's coming—and it's frequently hard to know, depending as it does on the season, the route, the time and the place—the brightness always catches me off guard. The cockpit beyond the bunk is so blasted with a directionless daylight so pure and so overwhelming, so alien to the darkness I left it in hours ago and to the gloom of the bunk, that it is like a new sense.

As my eyes adjust, I look forward through the cockpit windows. At this moment it's the light itself, rather than what it falls upon, that is the essential feature of the earth. What this light falls upon is the Sea of Japan, and far across this water, on the snowcapped peaks of the island nation we are approaching. The blueness of the sea is as perfect as the sky it reflects. It is as if we are slowly descending over the surface of a blue star, as if all other blues are to be mined or diluted from this one.

And I was his faithful reader from then on out—still am, actually, as I'm not quite done with the book. But it's one of those you don't want to end. I want to spend more time in this world. His section in the chapter on "Wayfinding" about the Sky Countries and radio beacons of the world has a pace and timing that is practically hypnotic, pulling you into his eyes and experience and bringing you a new, almost visceral awareness of the physical world he's traversed so many times.

He follows that chapter with one called "Machine," which is part personal love letter to, part history of, and part technical insider account of the airplane itself—and the engineering of it. That's followed by a chapter on "Air" that reminds us that, although "Air, in general parlance, is almost always an absence" of something, the air itself is an environment "marvelously alive" with "the most physically dramatic activities of the natural world." I'm about to enter a chapter on "Water" and have "Encounters" (he tells us on the opening page of the book that one of the most frequent questions he receives as a pilot is "Have [you] ever seen anything 'up there' that [he] cannot explain" so I was eagerly anticipating this one.), "Night," and "Return" left to go. (You may be hearing more from me on those chapters when I'm finished.)

Running a risk of referencing too many other books, and taking anything away from the beautiful one at hand (even the cover is gorgeous!), I'd like to bring up a point from The Upside of Stress which is being featured right now in our weekly Book Giveaway. Kelly McGonigal's core argument in the book is that it is not stress that is harmful, it's that fact that we think stress is harmful to our health that is really harmful. It's a self-fulfilling prophecy, the mindset that does us in. Similar to Louis CK joking that "everbody on every plane should just constantly be going 'Oh my god! Wow!'" instead of complaining about legroom because "You're flying. You're sitting on a chair in the sky!"... it's a matter of mindsets, and how improving them alone can improve our lives.

If you're reading this review, there's a good chance you're a businessperson. If you're a businessperson, there's a good chance you fly a lot. And, if you fly a lot, you should really check out Mark Vanhoenacker's new book Skyfaring: A Journey With a Pilot. If you think it will help you get through it, save it for your next flight. Whenever you read it, I think Vanhoenacker's enthusiasm will It will leave its mark on you and change your mindset a little, remind you of the anticipation and excitement you felt before your first flight—assuming the fear didn't overwhelm it—and renew a sense of awe on your next.

And, beside that, it's just a really great industry book. 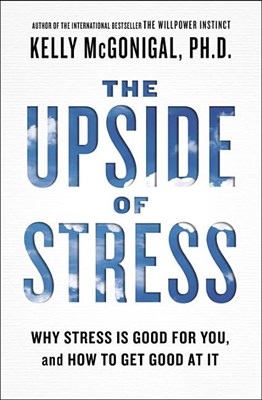 Upside of Stress: Why Stress Is Good for You, and How to Get Good at It