A new book that shows how social media is doing more than enabling harmful behavior, it is structurally facilitating that behavior and profiting off of it too. 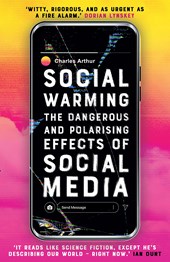 Social Warming: The Dangerous and Polarising Effects of Social Media by Charles Arthur, One World

It's fascinating, and feels somewhat like science fiction, to see the digital world threaten our real-life humanity in as dramatic of a way as climate change. And, also like climate change, it's been a longstanding issue—only in retrospect are we able to acknowledge how bad it's gotten, even as we’re grappling with its ramifications in real time. Beginning with the early Bulletin Board Systems of the late '80s Internet and tracing the steady rise of social media's involvement in people's lives, Social Warming by journalist Charles Arthur uses real-life instances of sites' lack of action to put altruism over algorithms and advertising.

In Social Warming, Charles Arthur argues that social media is doing more than enabling harmful behavior, it is structurally facilitating that behavior and profiting off of it too. For example, when searching news about an Islamist insurgency in the Philippines, a counterterrorism researcher's Facebook Friend suggestions queue was filled with extremists. Arthur asks:

[M]ight there be a way to pause the recommendation of potential recruits to extremists? If the price was that some normal people would have to look a little harder for a local running club's Facebook group, or hunt through the profiles of Friends of Friends, would the world be worse off than it was by having a large number of runners and terrorist recruits?

Nobody had the power to force Facebook to reckon with that question, however. To the algorithms, all that mattered was more: more Friends, more Likes, more Pages, more interaction.

The rise of social media happened quickly and infiltrated our lives thoroughly, so repairing the damage and preventing further affliction feels impossible. The websites nearly have minds of their own, but so do we. Throughout the book, Arthur points out several possible ways to take power away from social media including hiring more moderators, removing certain features of posts like 'like' counts and timestamps, making sharing posts more difficult, restricting the size of networks, and encouraging us all to widen our view of social media beyond the positive connections that are happening online to also acknowledge the hate that the networks are stoking. As "connected" as we may feel on social media, Social Warming thoroughly shows how detached we've all become not just online but in real life too. 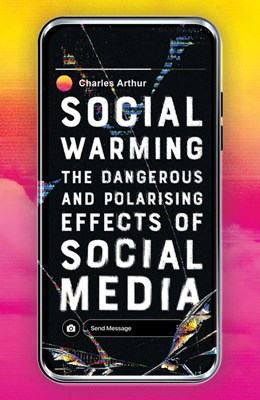