Taking People With You

Over the course of several decades in business, David Novak has worked his way up in the Pepsi Cola North America Co. through sales and marketing, into what was then its fast food division. In the late 1990s, the restaurants were spun off into a separate company and Novak went with them.

Over the course of several decades in business, David Novak has worked his way up in the Pepsi Cola North America Co. through sales and marketing, into what was then its fast food division. In the late 1990s, the restaurants were spun off into a separate company and Novak went with them. Today he serves as Executive Chairman and CEO of Yum! Brands Inc., owner of the Pizza Hut, KFC and Taco Bell chains.

All that time building businesses, creating products and creating value has taught Novak one thing, which is the subtitle to Taking People With You, and that's taking people with you is "The Only way to Make BIG Things Happen." Novak attributes the success the companies he's bee involved with to the lessons he's learned and stuck with over the years. These lessons, he says, help get people aligned, enthusiastic, and focused relentlessly on an organization's mission. The tenets laid out in the book help achieve that. They are based on a trademarked program Novak has developed and uses at Yum! that's also Called Taking People With You. His approach is less about literally taking people with you, as in promotions and carrying them into your inner circle, than it is about inspiring them to sign on to your vision of the future – a vision that includes them. In the book, Novak tells the story of an experience early in his career in which he had just become head of Pepsi Bottling. Prior to this, he spent the bulk of his career in sales and marketing, so operations were new for him, he wrote. In an effort to learn more about operations, Novak travelled to a plant where he picks up the story:

I was at a plant in St. Louis, conducting a 6:00 A.M. roundtable meeting with a group of route salesman, when, over coffee and doughnuts, I asked what I thought was a pretty straightforward question about merchandising, which is all about the displays and visibility we get in convenience and grocery stores. I wanted to know what they thought was working and what wasn't. Right away, someone piped up, "Bob is the expert in that area. He can tell you how it's done." Someone else added, "Bob taught me more in one day than I'd learned in two years on the job." Every single person in the room agreed: Bob was the best there was. I looked over at Bob, thinking he must be thrilled by all this praise. Instead, I saw that he had tears running down his face. When I asked him what was wrong, Bob, who had been with the company for over forty years and was about to retire in just two weeks, said, "I never knew anyone felt this way about me." The rest of my visit to the plant went pretty well, but I walked away that day with an uneasy feeling. It was such a shame that Bob never felt appreciated. It was a missed opportunity for the business, too. We all could have benefited from his expertise, and more people could have learned from him. This guy was clearly great at what he did, but who knows how much better he could have been in a workplace that recognized and rewarded his knowledge. I knew that if he felt overlooked and underappreciated, others at the plant did too.

Novak wrote that the experience profoundly changed him and made him determined to never be the kind of leader who would let someone move through his or her entire career without being appreciated or that she had the potential to be so much more. None of this is as fluffy as it sounds as, in addition to his insightful advice, Novak provides exercises, worksheets and other tools to help executives from any size company bring people with them. And does this stuff work? Consider that Yum! Brands' stock has grown in value by 13 percent or more for each of the last nine years, that the company operates in 112 countries and employs 1.4 million people. Taking People With You is destined to become a staple on the bookshelves of leaders. The advice is practical, effective and actionable. The cherry on top? Novak is giving his share of the proceeds from the sale of the book to the United Nations World Food Programme. 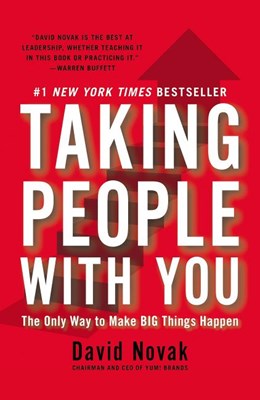 Taking People with You: The Only Way to Make Big Things Happen