Thanks for Waiting: The Joy (& Weirdness) of Being a Late Bloomer

Doree Shafrir’s compassion for herself as a late bloomer will inspire readers to treat themselves with as much self-respect and patience, too, 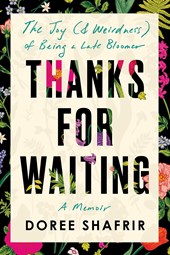 Thanks for Waiting: The Joy (& Weirdness) of Being a Late Bloomer by Doree Shafrir, Ballantine Books

This weekend, I was explaining my favorite genre of books and movies to a friend, and I couldn’t think of any better description than “coming-of-age." However, only a small portion of the coming-of-age stories I’ve enjoyed recently have been about young people literally coming of age. It made me realize that 1. that terminology could be made more inclusive and 2. It’s unhealthy to believe that everyone’s maturing/learning is done between the ages of 12 and 21. Transformational and life-changing experiences really do occur at any age, and it’s unfair for anyone to feel singled out because they’re exploring life at a different pace or on a different track than their peers.

Doree Shafrir’s new memoir reflects these sentiments: Thanks for Waiting traces Shafrir’s life and career from bookish child ahead of her class to a relationship-reluctant (rejection-fearing) twenty something to an intern at Slate at nearly thirty years old, focusing on how she always tended to feel singled out and sometimes lonely in her experiences as a “late bloomer.” It’s got a happy ending, though, as she is now 43 and co-hosts the Forever35 podcast, which was the winner of the 2020 iHeart Radio Award for Best Fashion & Beauty Podcast.

Shafrir’s compassion for herself will inspire readers to treat themselves with as much self-respect and patience, too, hopefully while they’re still in the midst of late blooming rather than having to forgive themselves for it later. Through her recollections, Shafrir recognizes both the positives and negatives in her delayed adulthood experiences. For example: her dating life.

When she started dating Matt, she was worried he was another of several men she met who were “future talkers,” men who talked about having a lot of big plans for your relationship but never actually followed through on them. From first Tinder message to Disneyland date to dinners with family, Matt never let Doree down, yet she had a lot of past dating disappointment to get over to be comfortable with him:

Being a late bloomer may have meant that I recognized a good thing when I saw it, but it also meant that the memories of my past relationships were always lurking in the background.

Does the on-time bloomer even exist? If so, I’m not sure I want to be one, because Shafrir really makes taking our time with life sound much less stressful and, in the end, pretty advantageous as well. But I’ll be happy with whatever pace my life takes. Thanks for Waiting is a fantastic contribution to the tapestry of women’s insight that I love so much about the memoir genre.

For related reading on this topic, An Ordinary Age by Rainesford Stauffer (which I reviewed in May) asks us to reassess the high expectations for those between 18 and 30 and that life is more than milestones, and, in a continuation of this slow-down-and-smell-the-roses attitude, Thanks for Waiting is a memoir that reassures readers that there is no correlation between age and drink preference or relationship status or job title. (GMC)

Thanks for Waiting: The Joy (& Weirdness) of Being a Late Bloomer