The Antisocial Network: The GameStop Short Squeeze and the Ragtag Group of Amateur Traders That Brought Wall Street to Its Knees

There are so many things to learn—about Wall Street, about short selling, about social media’s growing influence on investing, about the gamification of trading—in the individual stories Ben Mezrich tells and how they connect to one another. But the real magic is in the writing itself. 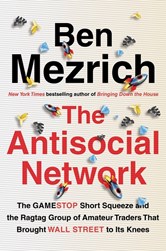 The Antisocial Network: The GameStop Short Squeeze and the Ragtag Group of Amateur Traders That Brought Wall Street to Its Knees by Ben Mezrich, Grand Central Publishing

Keith Gill posted his YouTube videos espousing belief in the deep fucking value of GameStop stock from a Game of Thrones themed, faux leather gaming chair in his basement. He is one of the primary characters in The Antisocial Network, Ben Mezrich’s new book that uses a device from the Game of Thrones series, as well—changing the point of view on the story from character to character with each and every chapter, just as George R.R. Martin does in his books. I am not sure if it was an intentional homage, but Mezrich uses it to great effect.

There are so many things to learn—about Wall Street, about short selling, about social media’s growing influence on investing, about the gamification of trading—in the individual stories he tells and how they connect to one another. But in the end, for all you’ll learn, I am not sure that you’ll leave with a greater deal of understanding about a whole lot of it. And that is because, as well as Mezrich plots out the story, it is utterly absurd. It just doesn’t make a whole lot of sense. Consider this testimony from Ken Griffin of Citadel Securities before House Financial Services Committee:

How did that happen? Do we even know what it means in the present moment or portends for the future? That one company controls so much of the economy, and that so few understand what it is they even do, is only one part of the overall absurdity of the story. Valuations in Silicon Valley have long been accepted as completely untethered from reality, but are the stock prices of publicly traded companies becoming equally divorced from the fundamentals of those companies, driven by memes and the magical thinking of their fans?

The real magic in the book is in the writing—the way Mezrich can conjure a scene so vivid that you not only feel like you know the people on the page, but feel as if you’re in the room with them. The Robinhood trading app that the short squeeze of GameStop was largely executed on deploys a name and rhetoric that would have you believe they are defenders of the common retail investor, but with the perspective of Emma Jackson from Apex Clearing sitting in their pretentious lobby, you nod along as Mezrich makes clear through her eyes that their real customer (and therefore real alliance) is with the largest and most well-heeled institutional investors. There are so many moments of intimate thought like that, displaying instances of profound empathy for the individuals and their points of view in the book, that even amidst the absurdity of it all you at least get an understanding of them and their motivations. And in that, it feels a lot like life, making for an essentially human drama inside the financial upheaval. 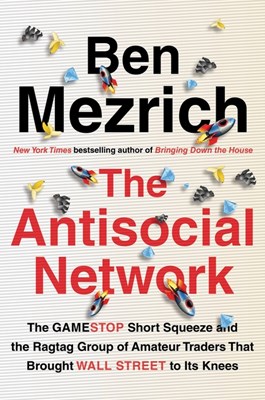 The Antisocial Network: The Gamestop Short Squeeze and the Ragtag Group of Amateur Traders That Brought Wall Street to Its Knees