The following review was written by our owner, Carol Grossmeyer, and first appeared in our monthly newsletter, the KeenThinker. ◊◊◊◊◊◊◊◊◊◊◊◊◊◊◊◊◊◊ It’s been a long time since a book has come across my desk that made me instantly stop in my tracks, so I was thrilled when The Female Vision: Women’s Real Power at Work did just that. I was captured first by the arresting cover, a closeup photo of a woman’s eyes and then intrigued by the simple but powerful title, The Female Vision.

The following review was written by our owner, Carol Grossmeyer, and first appeared in our monthly newsletter, the KeenThinker.
◊◊◊◊◊◊◊◊◊◊◊◊◊◊◊◊◊◊

It's been a long time since a book has come across my desk that made me instantly stop in my tracks, so I was thrilled when The Female Vision: Women's Real Power at Work did just that. I was captured first by the arresting cover, a closeup photo of a woman's eyes and then intrigued by the simple but powerful title, The Female Vision. While reading this timely study, the overwhelming feeling I experienced was "aha, it's not just me"—"I am not alone."

Sally Helgesen, bestselling author of The Female Advantage, and Julie Johnson, a pioneer in executive coaching, have written a book that explains the difference in how men and women approach the business world. For some readers of this review, any hint at gender difference issues becomes political and can raise the "feminist" red flag, but the authors are careful to note that gender/biological differences are relative, not absolute.

Through research, well-documented studies and personal experience stories, Helgesen and Johnson explain in The Female Vision what women "notice," how they value what they "see," and how that vision can be a powerful tool at all levels of the business world. But because, for the most part, business schools teach a singular "male" vision ("women's attention operates like a radar, picking up signals across a wide spectrum, whereas men's attention operates like a laser, focusing on a single point in depth"), the traditional workplace is not structured to recognize women's, often more subjective, observations.

The lack of attention to and lack of respect for women's ways of seeing, their holistic approach to motivation, and their perception of worth and satisfaction has put our marketplace—and culture in general— at a grave disadvantage. Many women at the top of their game end up feeling fraudulent at work as they stifle their best instincts and hesitate to defend the value of what they "see." In response the stifling may lead to personal self-doubt, but more often the best and the brightest simply "opt out" noting "it's just not worth it;" they abandon their desire for leadership roles and either do their best at a junior level or leave the corporate world altogether.

Helgesen and Johnson courageously argue, by enumerating the many women who tried to bring the impending disaster to light, that the absence of women's vision in high-level business leadership roles marked the way to the most recent economic nightmare. They quote the financial journalist Michael Lewis saying, in 2008: "[O]ne of the distinctive traits of the financial disaster was . . . how little women had to do with it." This argument is not intended to be divisive, but to serve as "a demonstration of what can happen when an exceedingly narrow vision gains ascendancy in the business culture and continues to operate without check."

The authors discuss how so-called "forward thinking companies" talk the talk about company benefits that address quality of life issues—but talking the talk is not enough. The authors logically guide us through the steps that will allow businesses to also walk the walk. Valuing and utilizing women's unique vision is truly invaluable to our future success. For example: "The value women place on relationships has increasing marketplace value. Changes in the nature of technology have made relationships—with customers, clients, suppliers, competitors, shareholders, and the community as well as within the organization itself—a far more vital resource for organizations than in years past."

But women too must learn how to act on their vision, take the initiative. The authors encourage women to find allies, remain present, set boundaries, and they offer practical guidelines to create the conditions for success. The Female Vision is an important book: important for women who, after reading, will not only feel less alone as I did, but will find a helpful guide to begin tapping into their "real power at work;" and important for men who want to help create an environment for their female colleagues and employees to create and contribute their best work. As Marshall Goldsmith explains in his foreword to the book, the reason both men and women should read this book is because no one wants to see talent walk out the door because she "decided it just wasn't worth it."

If you'd like to read more from Helgensen and Johnson before picking up their book, head on over to ChangeThis and read their manifesto. 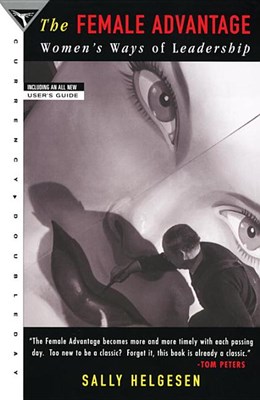