We face both urgent crises and profound, existential challenges as a species, but we have the ability to cooperate—and to change and evolve the ways in which we do. Nichola Raihani explains how important that ability has been to our success in the past, and how likely it is to determine our fate.

Do you remember that moment as a kid when it dawned on you that there might be different layers of life? It may have been but a fleeting moment—whether prompted by a pondering friend, reading Horton Hears a Who, or watching an ant colony go about its business in the dirt—just a passing thought like: What if we’re like ants to some larger being, or our entire universe exists in the cells of some giant just like us but in an even more giant world? And what if I contain multitudes, and many worlds, inside of me? You probably didn’t echo Whitman so much then, but hopefully you can forgive me now for being reminded of those youthful adventures in thought when reading Nichola Raihani’s new book, The Social Instinct, where she writes:

The evolution of individuals was the first crucial step on the road to ever-increasing social complexity, foreshadowing the transitions to families, to communities and to large-scale societies. But how do we know when a collection of genes and cells become an individual? Why should a person reading this book have the special status of being an individual, rather than conceiving of every cell in your body as an individual or, indeed, every selfish gene?

The term “selfish gene” is not an accident, as the book follows in the tradition of Richard Dawkins’s book of that name. But, just as Charles Darwin’s concept of the “survival of the fittest” is incomplete without understanding that it is as much about cooperation as it is competition (and maybe even more so), or that Adam Smith’s Wealth of Nations offers an incomplete understanding of his ideas without reading his Theory of Moral Sentiments (maybe I’m stretching this too far, here), the idea of the “selfish gene” is incomplete without the understanding that “at the molecular level, cooperation is ubiquitous: every living thing is composed of genes cooperating within genomes.” Which is to say, Nichola Raihani’s Social Instinct completes the picture. Over the course of the book, she broadens the perspective of how our survival is aided by cooperation, from how it operates in us as individuals, to the aforementioned “transitions to families, to communities and to large-scale societies.” But cooperation is not always positive. Just as cancer cells can cooperate to bring an end to our individual lives:

Nepotism, corruption, and bribery are all forms of cooperation, occurring among a minority of individuals while imposing larger costs to society.

We face both urgent crises and profound, existential challenges as a species, but we have the ability to cooperate—and to change and evolve the ways in which we do. I have covered a lot of books by behavioral economists over the years, but I don’t believe I’ve ever covered one written by a behavioral ecologist. I am glad I finally found my way to one. Like economists, they also focus on the individual. And like behavioral economists challenging the idea of “homo economicus”—of humans as individual, rational actor who always act in their own narrow self-interest—Raihani insists we can put cooperation above self-interest as a species, to build agreement on what our direction should be and the institutions we need to sustain it. Whether we exercise that ability, and how, will determine our fate. 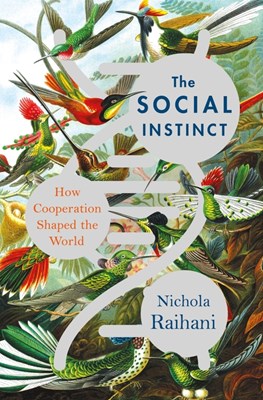