Emily Porter found the cover of Monique Truong's new book irresistible, and that it contained "the type of writing that makes you want to skip all of your responsibilities in order to ravish the pages until you take in every word." 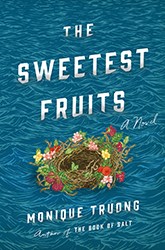 They say we shouldn’t judge a book by its cover, but when searching for a new title to sink my teeth into I tend to be an incredibly visual person. The rich blue and alluring floral wreath on the cover of Monique Truong’s new book, The Sweetest Fruits, drew me in instantly. I’m glad it did, because the way Truong  composes her novel is just the type of writing I pine for—the type of writing that makes you want to skip all of your responsibilities in order to ravish the pages until you take in every word. My mind felt irrevocably in sync with hers while reading this novel, made me yearn for more, and has me itching to read everything Truong has published. (She has also written Book  of Salt,  which I plan on picking up soon.)

Troung takes a narrative approach with a historical backbone in The Sweetest Fruits, one that lures the reader in, wanting to know all aspects of the amazing women who encompassed the shy, yet prolific writer Patricio Lafcadio Hearn—known for his Japanese legends and ghost stories, as well as a Creole cookbook. The reader is guided by the memories of these women, the memories of a birth, two marriages, and a great loss that is woven through their pasts with Hearn. We are introduced to a strong yet oppressed Greek woman, Rosa Antonia Cassimati, a tenacious boardinghouse cook who was born into slavery, Alethea Foley, a strong Japanese daughter of a samurai, Koizumi Setsu, and the journalist who bundled together their stories to create a biography so the world would know of Lafacdio Hearns intimate detailed life, Elizabeth Bisland. All of these women knew Hearn in different capacities and had a unique impact on who he would become as a writer and as a person, which made these women incredibly crucial characters in his life.

His mother paints the scene before Hearns' birth. From living with her father and brothers who kept her confined in the home, she was no stranger to female oppression during the time period. After meeting Hearn’s father, who soon abandoned them at his elderly aunt's home, she was forced to leave her second born with the aggressive stranger for a “better” religious upbringing that ended up leaving him alone and homeless. She speaks of her life as a woman:

Born of grief, loss, tragedy or shame, such companions often follow the bodies of women. Men shrug theirs off by traveling afar, strangling them in foreign fields or drowning them in deep waters.

Alethea Foley, who was born into slavery on a Kentucky plantation and was a cook throughout her life, shared her memories with the journalist of her first husband with bittersweet recollection:

I didn’t always understand Pat’s stories once they had reached the pages of your newspaper, Miss. As with his lilt, Pat could change his words at will. I preferred the plainer ones that he used when he told his stories to me. The readers of your newspaper preferred the ones bedecked with lace, as Charlotte would say. Maybe the readers wanted the lace because they had to pay money for the stories. I got them for free.

Koizumi Setsu, the daughter of a great samurai, ends the story with a look back onto her and Hearns life together raising their four children. Setsu continues her relationship with her deceased husband by sharing her nightly ritual:

Once the children are asleep, I light the lamp in your writing room and we begin. These lips do not move, nor do yours. We hear each other’s voices all the same.

What really tugged at me the most was how Troung provides these women, who were hidden behind this international male writer and the ways of the time, a strong and influential voice. It shows the hardships they had to endure merely for their gender, and how they helped mold this well known writer—some even collaborating behind the scenes. On a broader scale, the novel shows the intricacies of life and how relationships really shape the person you eventually become. In this case, it just happens to be Patricio Lafcadio Hearn. 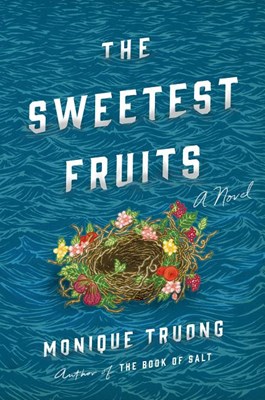