What books are on your holiday nightstand?

The 800-CEO-READ family is all set for the Thanksgiving holiday, and have some great books on hand to take with us to the couch after the feasting is done! If you're like us, you're already drooling thinking of a big Thanksgiving meal near the end of this week. Whether you go with turkey, turducken, tofurkey or tacos, I think we can all agree that this is week is the golden hour of eating. And after we've stuffed ourselves until we cannot move, we grab some books and head to the couch (or bed—no judgment). From riveting fiction and rockstar biographies to Booker Prize and National Book Award-winners (Congrats, Marlon and Ta-Nehisi!), here's what we'll be reading after the dishes are cleaned!

The Small Backs of Children by Lidia Yuknavitch

Fates and Furies by Lauren Groff

Stir: My Broken Brain and the Meals That Brought Me Home by Jessica Fechtor

Vanessa and Her Sister by Priya Parmar

A God in Ruins by Kate Atkinson

The Man in a Hurry by Paul Morand

I picked up the Morand because of my obsession with Pushkin Press' "Pushkin Collection" and this being the first hardcover in that series. It's a wonderful story about a French antique dealer and his compulsion toward celerity, and what happens when this man falls in love. I have been steadily picking up some Antonio Tabucchi books but have yet to read any of them; Tristano Dies is the most recent output via my Archipelago subscription and it's the perfect reminder to finally read some of Tabucchi's work. As for the Moomins, they have been a growing interest shared between my six-year-old daughter and me.

It’s a rockin’ fall! I hope to finish Patti Smith’s M Train this week so that I can start Carrie Brownstein’s Hunger Makes Me A Modern Girl: A Memoir.

Next up for me is the book The Fry Chronicles: An Autobiography - because Stephen Fry ROCKS!

That said, I'll probably be getting his most recent book, More Fool Me: A Memoir after that.... because well, Stephen Fry ROCKS!

Between the World and Me by Ta-Nehisi Coates

The Turner House by Angela Flournoy

A Brief History of Seven Killings by Marlon James

The Seamstress and the Wind by César Aira

My co-worker Michael Jantz brought this book in for me to read from his bedside table.  It is a short, funny jaunt of a few characters to Patagonia on Aira’s stream of whatever came to mind.

The End of All Things by John Scalzi

I first read Old Man's War by this author in Isla Mujeres while on my honeymoon. I was quite entertained by that book and have read each subsequent entry in the series. John Scalzi is now one of my go-to authors for when I need a fiction fix in the genre of SciFi. This is the sixth book in The Old Man's War series.

Why We Get Fat: And What to Do About It by Gary Taubes

Books on eating right and staying healthy have always been of interest to me. In 2008 I had been a vegetarian for seven years and somewhat reluctantly read Good Calories, Bad Calories (also by Taubes). I knew going into it that the book was going to run counter to how I had been eating for so many years. I finished that book and with it I ended my stretch as a vegetarian. Why We Get Fat is largely a redelivery of the message from Taubes' previous book, with the goal of making it more accessible to the average reader while also including new research results on the topic. I'm reading it as a refresher on the subject but also as a preview for sharing the title with others. I gave a few people GCBC in 2009 and none of them made it through the whole book. I expect this version of the message will get better results.

The Third Plate: Field Notes on the Future of Food by Dan Barber

As it gets colder here in Wisconsin, and I have just a few odds and ends left in my garden, I wonder a lot about what makes my tomatoes better one year over the next. Dan Barber's book starts off with a historical perspective on our relationship with soil that will forever change the way I think about bugs, roots, weeds, and manure. I've already renewed it twice from the Milwaukee Public Library.

Why We Get Fat: And What to Do about It 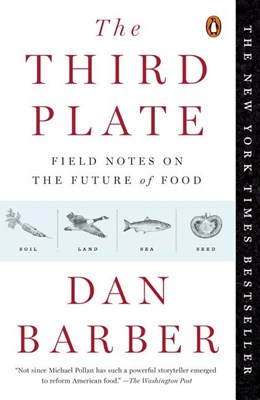 Third Plate: Field Notes on the Future of Food

Third Plate: Field Notes on the Future of Food