What Works: Gender Equality By Design What differentiates What Works from the multitude of books digging deeply into gender inequality is Iris Bohnet’s focus on action. This book’s main objective isn’t just to identify a problem. And it’s not attempting to regurgitate history or place blame or stimulate discomfort. Instead, What Works focuses on providing pragmatic steps, or “research-grounded design suggestions” for solving, or at least chiseling away at, the biases that prevent us from acting on our good intentions. Indeed Bohnet writes this book from that unique position: with an assumption that everyone should--and most people do--want gender equality. But the question is, how do we move the needle? Some have suggested "leaning in." Bohnet's answer? Design.

Much like interior designers or landscape architects, behavioral designers create environments to help us better achieve our goals. They do not define goals, but they help us get there.

Now, this premise may come as a surprise. We are all very used to discussing gender inequality from a position of blame and individual responsibility. We tend to rail at the gods--fight the system! fight the power!--but don't know how to wrest power away from them. Here Bohnet is more concerned that the glacial pace with which gender equality improves is due, in part, to unconscious bias. To illustrate these biases, she uses academic research from behavioral science to help us identify our unwitting prejudices and then “design” a methodology for remapping how we habitually think.

Because the stakes are high by every measure, let me be clear. Far from all gender inequities are the result of unconscious bias, which is only one of the culprits unjustly disadvantaging some and benefiting others. And behavioral interventions are one instrument in our collective toolbox to correct for these injustices. Biases are, however, a clear cause of inequality, and behavioral designs can accomplish things that hammers cannot.

It's true that What Works is a complicated book. Not because Bohnet isn’t a clear writer—she is both precise and engaging—and not because the methodology she presents is particularly daunting in terms of execution. It’s complicated because gender equality is complicated, especially if we want to make sure we don’t resort to knee-jerk name-calling or victim-blaming. It’s complicated because we simply aren’t aware of all the ways in which we are biased. (And, it’s to Bohnet’s credit that she doesn’t lose sight of other minorities who face similar and/or additional disadvantages and ages-old biases despite her focus on gender.)

Bohnet spends significant time identifying and explaining the “subconscious biases” that lurk everywhere, not only in our structures, but in ourselves. Using multiple research studies, she describes the ways in which our decision-making is hindered by our habits. If we design strategies to circumvent our biases or remap our brains, then we remove any detrimental defensiveness out of the effort and can instead follow a plan. To this end, What Works is broken into four parts: The Problem, How to Design Talent Management, How to Design School and Work, and How to Design Diversity. After each chapter, she presents 3 design strategies (thirty-six total in this book) to put into practice. And truly? There isn’t a single lull in the fascinating research and design solutions Bohnet reveals to readers.

Much of What Works is a call for leadership to start “designing your own changes at work or school.” Gender equality has proven to be a benefit in all ways, in any industry, and that alone behooves leaders to do the work to manage any kind of discrimination in the workplace. She is suggests ways in which organizations can assist in promoting gender equality by restructuring business-as-usual. For example, Bohnet refers to Daniel Kahneman and Amos Tversky, well-known behavioral economic theorists, in describing availability heuristic, which is a bias that basically means that we believe what we hear most frequently. To illustrate this tendency, she uses a rather depressing anecdote: we hear about the murders that happen across the country all the time, but we rarely hear about suicides. This makes us think that murder is more prevalent than suicide, but the numbers don’t bear that out. Suicide is more common than murder, despite what our news sources broadcast.

Extrapolate out, and it makes you wonder how much more we believe that simply isn’t true, especially when technology allows for us to be bombarded by a greater amount of shallow information. Dig even deeper, and the odds that we can truly reroute our biases, and optimize the benefits of gender equality, becomes staggeringly poor, because, Bohnet shares, “Linguists have long pointed out that language is gendered.” So, if you are striving for diversity in hiring, for example, but the language you use is primarily masculine, you are inadvertently limiting your candidates because those candidates are already prone to a behavioral action called sorting.

People self-select into jobs based on their preferences and their beliefs about whether or not they belong. Job descriptions provide information and behavioral cues about both. And if you are not careful, both speak immediately to gender identity fit.

Again, it’s unlikely that this kind of bias is as intentional as it is incidental, and Bohnet is careful to be clear that it isn’t only exercised against women. Elementary schools are staffed primarily by women, Bohnet points out, but children need male role models as well.

Most schools want to benefit from 100 percent of the talent pool and not deter skilled male applicants simply because the gendered adjectives in their advertisements signal to men that they do not belong.

The language used to solicit interested candidates to become teachers is the very thing that both deters men and makes teaching a "female" profession that then often leads to teachers being underpaid because women are still underpaid. It's a complex chain of causal links. If the very words we use create inequality, what are we to do? Again, she offers easily implementable design suggestions. At the end of her chapter on “Attracting the Right People,” she enumerates:

This instructive and pragmatic approach is what is so compelling about What Works. Bohnet’s willingness to suggest actionable steps makes gender equality seem like a problem to be solved rather than a mountain to be moved. Instead of dismantling systems, she offers ways to change them from within.

Staying with the school example, research indicates that women are less comfortable with “guessing,” than men, especially when in an environment where guessing is risky. But instead of a massive overhaul of school programs to assist girls in becoming braver when it comes to math and science, one suggestion is simple: “Consider offering a friendlier environment. Remember that women tend to do better on math tests when the proportion of men around them is small.” Most people would say that separating genders is detrimental, or regressive, but Bohnet argues that that is a groundless kind of equality. Instead, women advance when deliberate modifications are made to allow for past prejudices.

Transparency is another tool that Bohnet refers to often throughout the book, but she pays particular attention to it in the final section, How to Design Diversity. In her chapter on “Increasing Transparency,” she advocates for public accountability.

Holding organizations accountable by asking them to “explain” when they have not “complied” is another lever that helps people follow through on their good intentions. In fact, the literature on accountability suggests that people charged with evaluating others are less likely to rely on stereotypes if they have to explain their choices.

If we indeed accept the optimistic premise that most people desire gender equality, and most organizations recognize the value of gender equality, then calculated change, while uncomfortable because it makes us adjust our habits and acknowledge our shortcomings, is the way to make change.

Which is a handy segue into explaining why this book speaks so directly to me, and how we can and should apply these design methods to our own company. In February, I wrote a lengthy article called "The Absence of Presence: The Position of Women Authors in the Business Genre" that began as a personal indictment of our editorial process for choosing our yearly Business Book Awards winners.

While I’m not as well-versed regarding bias as Bohnet, in that article I did try to dig into how our assumptions about women business authors, as well as the biases present in the entire industry, prevent us from judging books without bias. I took a risk by criticizing our company and critiquing the process by which we review books. But I was aiming for transparency. I was aiming toward taking responsibility for our inadequacies and committing to intentionally improving our process. I publicly declared that we would rethink and, yes, “redesign” our awards categories and processes to better allow access for women business authors. There’s no going back now! And that is the power of transparency: to “hold people and organizations accountable for their follow-through.”

What Works should be required reading for all leaders and managers in any organization. There is so much applicable and executable advice that will make a real difference in how you achieve your goals for a diverse and equitable workplace. Every organization or individual will benefit from access to the full expanse of talent and opportunity available, and it is to all of our detriment if we allow our unconscious biases to prevent change from happening. 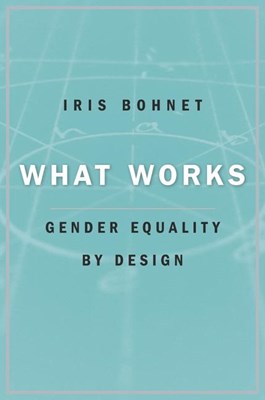