The importance of learning the real, often racist history of America is clear these days, and Jane Dailey’s book examines the many layers of post-Civil War society to clearly reveal the political grip of whites in America, holding racism in place through the policing of bodies. 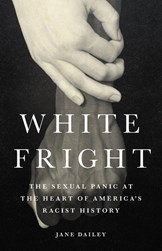 A thorough and heavy history by an expert on the Jim Crow South, White Fright exposes another devious tentacle of white supremacy. Jane Dailey relates history in such a propulsive and thorough way, it's impossible for me not to get heated over the injustices she brings to light during the post-Civil War period of America.

"The civil rights movement was articulated against a white opposition that was explicitly and thoroughly sexualized."

Dailey starts off with a straightforward fact: In 1959, twenty-nine states prohibited interracial marriage. To put that in perspective for myself, I remembered that my father was born in Mexico in 1954 and my mother was born in Wisconsin in 1964. So, between these two years interracial marriage was so reprehensible to enough Americans that not only was interracial marriage banned, but a children's book about the marriage between a white rabbit and a black rabbit was banned in the United States, too. And for almost two decades after that, not even advocates for African American equality made any attempts at overturning these state-mandated, racially restrictive sex and marriage laws.

The importance of learning the real, often racist history of America is clear these days, and Dailey's book examines the many layers of post-Civil War society to clearly reveal the political grip of whites in America, holding racism in place through the policing of bodies.

"Most Southern Christians rejected as heretical the notion that Negroes were created before Adam and were therefore soulless beasts incapable of salvation, but several influential post-emancipation writers persisted in arguing precisely this point."

From universities to the navy to the Christian church, all had a hand in keeping interracial marriage banned, socially and politically.

I often find it hard to digest history. The rote memorization of dates and superficial facts is difficult enough, but as White Fright makes clear, there's a deeper reality to grapple with. There is so much more—societally and culturally, politically and even economically—that surrounded the bans against interracial marriage, so much more that makes racism much harder to get rid of still, than passing or overturning a few laws or winning a few court cases. We also have to address these issues personally and interpersonally.

Racism seems to be contagious, but seeing more books like White Fright in stores, on shelves, and in hands feels like a step towards a cure. 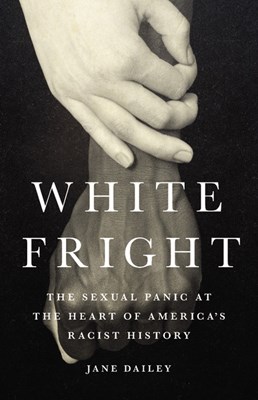