Why Fish Don't Exist : A Story of Loss, Love, and the Hidden Order of Life

Lulu Miller’s book shows how people throughout history can be perceived as someone completely different than their true character and shows us how to look at the world from many different perspectives to process what is in front of us while asking existential questions. Fish truly do not exist. Read this book to find out why. 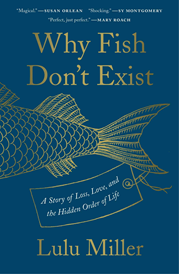 If you have ever listened to podcasts RadioLab or Invisibilia, you have most likely heard the soothing and sultry voice of Lulu Miller sharing an awe-inspiring story with the world. And if you have not, do yourself a favor and listen to one. (Yes, this is my second review of a producer of a podcast within the last two months, as I reviewed Stephanie Foo’s new book, What My Bones Know, last month.... which you should also read.) Miller’s new book, Why Fish Don’t Exist, filled me with awe, wonder and pure shock. We follow the author, Lulu Miller through stages of her life as her reality becomes intertwined with a famous scientist's history, and readers are graced with intriguing philosophical and existential questions of existence and how chaos dances with the everyday.

As a science reporter, Miller grew up idealizing David Starr Jordan, a scientist who discovered most of the fish species that are safely housed in jars at Stanford University where he was once president. She grew up obsessed with the idea that chaos runs the world and will affect everything and anything in its path. When she first learned about Jordan, she thought his positive outlook against chaos was absurd and foolish, but then it lured her in to discover more about this upbeat scientist.

Miller’s life as she knew it was unraveling in front her, but she redirected her attention by consuming all the information she could on David Starr Jordan. In Why Fish Don’t Exist, Miller weaves together her idea of Jordan, the life lessons her father instilled in her, and what she learns about herself and the world. The more information she gathers, the more her idea of him contorts grotesquely into someone terrifying and full of darkness masked by a positive vision of his own self.

Streets, universities, awards, landmarks and even a tree were named after the ichthyologist, but in 2020, when other landmarks were being second guessed, Indiana University stripped his name from a hall since he promoted the eugenics theory during his lifetime. Eugenics is the repugnant idea that human beings could be bred to have a world of the “best crop” of the species. Unfortunately, they missed how variation helps a species thrive which Darwin introduced. This started nonconsensual sterilizations of people deemed “unfit,” which is utterly repulsive and terrifying. Yes, the government sterilized men, women, and children who they saw as “unfit” for society without consent and sometimes without their knowledge. Even though Jordan made amazing strides within the world of science, he also contributed firsthand to the destruction of many lives, including Jane Stanford (of Stanford University who made decisions that affected Jordan’s work), and those deemed “unfit” by the eugenics theory he supported later in his life.

It was chilling. His brutality. His remorselessness. The sheer scope of his rampage. I felt sick. I had been fashioning myself after a villain, after all. A man so sure of himself and his ideas that he was capable of ignoring reason, of ignoring morality, of ignoring the clamor of thousands of people calling for him to see the error of his ways, I am a humanbeen as well as you.

Just like her words which filled me with a sense of discovery, gorgeously elaborate illustrations (done by Kate Samworth) greeted me between each chapter of the book. I appreciated this extra element of storytelling. One illustration, showing many broken jars meshed with limp fish bodies falling to their second demise, introduces the chapter relating to the time when most of Jordan’s life's work was destroyed by a San Francisco earthquake in 1906. This book, chock-full of facts, is riveting and eye opening, looking into the past and casting off the rose-colored glasses. A beautiful book where Lulu Miller shares loss, doubting herself, and finding love, we see the beauty and depth a life can bring. Miller’s book shows how people throughout history can be perceived as someone completely different than their true character and shows us how to look at the world from many different perspectives to process what is in front of us while asking existential questions. Fish truly do not exist. Read this book to find out why. 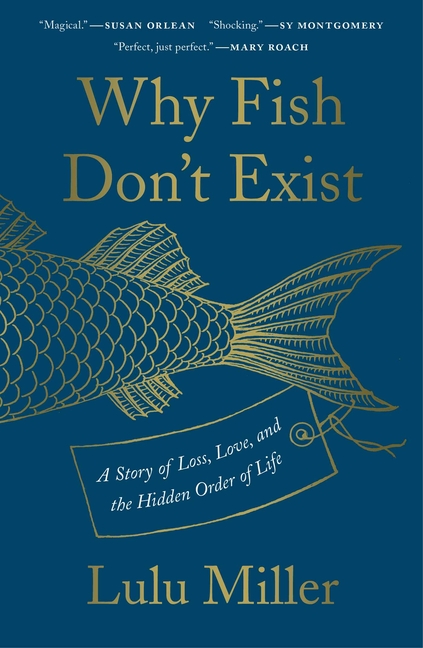 Why Fish Don't Exist: A Story of Loss, Love, and the Hidden Order of Life