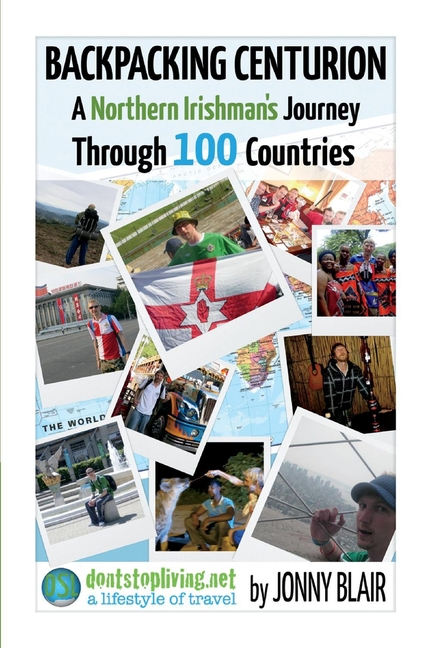 Don't Look Back In Bangor is the first volume from Jonny Blair's Backpacking Centurion series. This book focuses on Jonny's early days growing up in Northern Ireland, watching football and dreaming of one day travelling to far flung places like Yugoslavia, East Germany and the Union of Soviet Socialist Republics.

Slip inside the eye of your mind - Noel Gallagher.
When Jonny Blair's 100-country book Backpacking Centurion was completed in August 2015, it was supposed to be released soon after that, and as a one-off book. That didn't exactly happen the way it was intended. Over the next five years, as Jonny continued on his travels, it became clear that chapter after chapter needed to be re-edited, re-positioned and in some cases, removed, delayed or in other cases - posted faster and onto the online travel blog Don't Stop Living, which meant they didn't make the book as they made the blog.
In those five years, unfortunately depression kicked in and was the major reason for the book's delay. It was even possible that the book would never see the light of day at all. In 2019, it became clear that the book needed to be split into three volumes, and not all released at the same time. These three volumes are more or less in chronological order and are now being released one by one. The first one, here with its volume title Don't Look Back In Bangor is finally here in print.
Don't Look Back in Bangor, the first volume of Backpacking Centurion begins where it all began for Jonny Blair. That means the seaside town of Bangor in Northern Ireland. The year is 1980. Jonny will take you on a fool circle here as he details his childhood with footballic zest. Jonny's topsy turvy time at Bangor Grammar School is encapsulated in an enthralling chapter trilogy of teenage angst.
Delve into Jonny's early tourist days of visiting The Netherlands, France and significantly Bournemouth in 1994. Seaside beach towns beginning with B on the brain, it was here in an unlikely ice cream hut where this nationalistic Northern Irishman found a hunger for global travel.
Weekend trips to Burnley, Colchester and Portsmouth soon became backpacking adventures to Belarus, China and Poland. The odyssey really kicked off when Jonny was in his twenties, which is where this first volume ends to prepare us for volume two. This is a real life journey of ups and downs.
Expect some regretful bad boy behaviour, unashamed nudity and vintage banter as Jonny injects humour, sincerity and openness to his life of tears, fears and elation.
By the end of this volume, Jonny will have gone through failed romances, an arm break, a leg break and some wacky trips to lands afar watching the Northern Ireland football team. He will have you gagging for volume two, where in essence the real 100 country quest begins to dominate proceedings.
The volume's title and much of its theme reflects on Jonny's desire not to look back at what has been and gone. Doors are closed and his Bangor hometown was left behind. In true poetic Noel Gallagher fashion, Jonny's soul slides away, but don't look back in Bangor, we heard him say.

Jonny Blair is a Northern Irish travel writer based in Poland. Jonny was born in Newtownards in 1980 and grew up in Bangor in Northern Ireland. Since leaving his hometown in 2003, Jonny has travelled far and wide, detailing his journeys on his one man travel blog, Don't Stop Living.