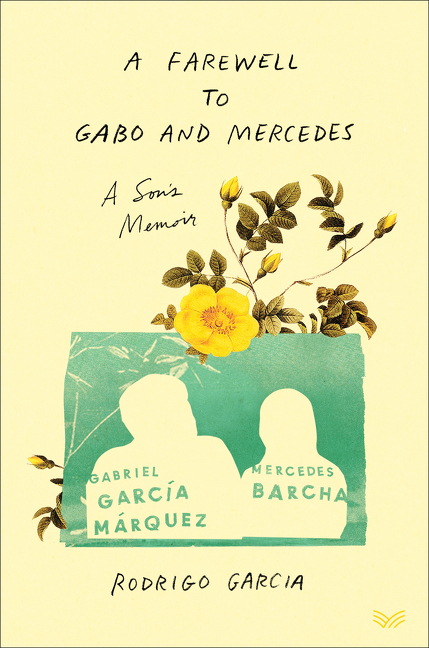 "This is a beautiful farewell to two extraordinary people. It enthralled and moved me, and it will move and enthrall anyone who has ever entered the glorious literary world of Gabriel Garc.

A Farewell to Gabo and Mercedes: A Son's Memoir of Gabriel García Márquez and Mercedes Barcha

A thoughtful memoir from filmmaker Rodrigo García is about processing and learning how to deal with the fame, aging, and death of his father, Gabriel García Márquez.  READ FULL DESCRIPTION

"This is a beautiful farewell to two extraordinary people. It enthralled and moved me, and it will move and enthrall anyone who has ever entered the glorious literary world of Gabriel Garc?a M?rquez."--Salman Rushdie

"In A Farewell to Gabo and Mercedes Rodrigo Garcia finds the words that cannot be said, the moments that signal all that is possible to know about the passage from life to death, from what love brings and the loss it leaves. With details as rich as any giant biography, you will find yourself grieving as you read, grateful for the profound art that remains a part of our cultural heritage."--Walter Mosley, New York Times bestselling author of Down the River Unto the Sea

"An intensely personal reflection on [Garcia's] father's legacy and his family bonds, tender in its treatment and stirring in its brevity."--Booklist (starred review)

The son of one of the greatest writers of our time--Nobel Prize winner and internationally bestselling icon Gabriel Garc?a M?rquez--remembers his beloved father and mother in this tender memoir about love and loss.

In March 2014, Gabriel Garc?a M?rquez, one of the most acclaimed writers of the twentieth century, came down with a cold. The woman who had been beside him for more than fifty years, his wife Mercedes Barcha, was not hopeful; her husband, affectionately known as "Gabo," was then nearly 87 and battling dementia. I don't think we'll get out of this one, she told their son Rodrigo.

Hearing his mother's words, Rodrigo wondered, "Is this how the end begins?" To make sense of events as they unfolded, he began to write the story of Garc?a M?rquez's final days. The result is this intimate and honest account that not only contemplates his father's mortality but reveals his remarkable humanity.

Both an illuminating memoir and a heartbreaking work of reportage, A Farewell to Gabo and Mercedes transforms this towering genius from literary creator to protagonist, and paints a rich and revelatory portrait of a family coping with loss. At its center is a man at his most vulnerable, whose wry humor shines even as his lucidity wanes. Gabo savors affection and attention from those in his orbit, but wrestles with what he will lose--and what is already lost. Throughout his final journey is the charismatic Mercedes, his constant companion and the creative muse who was one of the foremost influences on Gabo's life and his art.

Bittersweet and insightful, surprising and powerful, A Farewell to Gabo and Mercedes celebrates the formidable legacy of Rodrigo's parents, offering an unprecedented look at the private family life of a literary giant. It is at once a gift to Gabriel Garc?a M?rquez's readers worldwide, and a grand tribute from a writer who knew him well.

"You read this short memoir with a feeling of deep gratitude. Yes, it is a moving homage by a son to his extraordinary parents, but also much more: it is a revelation of the hidden corners of a fascinating life. A Farewell to Gabo and Mercedes is generous, unsentimental and wise." --Juan Gabriel V?squez, author of The Sound of Things Falling

"A warm homage filled with both fond and painful memories." --Kirkus

Garcia's limpid prose gazes calmly at death, registering pain but not being overcome by it . . . the result is a moving eulogy that will captivate fans of the literary lion. -- Publishers Weekly