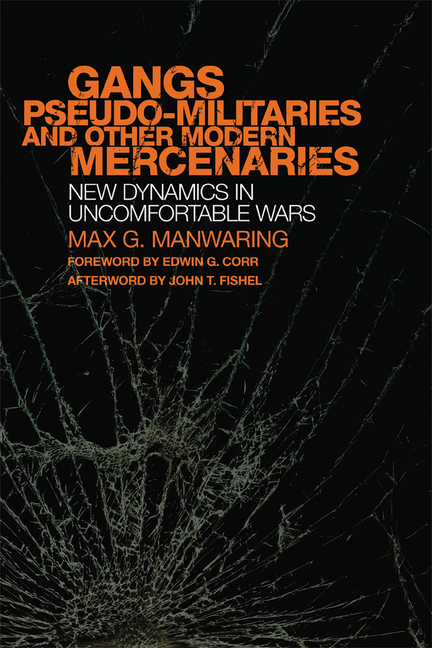 As the first decade of the twenty-first century has made brutally clear, the very definitions of war and the enemy have changed almost beyond recognition.

As the first decade of the twenty-first century has made brutally clear, the very definitions of war and the enemy have changed almost beyond recognition. Threats to security are now as likely to come from armed propagandists, popular militias, or mercenary organizations as they are from conventional armies backed by nation-states. In this timely book, national security expert Max G. Manwaring explores a little-understood actor on the stage of irregular warfare--the gang.

Since the end of the Cold War, some one hundred insurgencies or irregular wars have erupted throughout the world. Gangs have figured prominently in more than half of those conflicts, yet these and other nonstate actors have received little focused attention from scholars or analysts. This book fills that void.

Employing a case study approach, and believing that shadows from the past often portend the future, Manwaring begins with a careful consideration of the writings of V. I. Lenin. He then scrutinizes the Piqueteros in Argentina, gangs in Colombia, private armies in Mexico, Hugo Chavez's use of popular militias in Venezuela, and the looming threat of Al Qaeda in Western Europe.

As conventional warfare is increasingly eclipsed by these irregular and "uncomfortable" wars, Manwaring boldly diagnoses the problem and recommends solutions that policymakers should heed. The Complexity of Modern Asymmetric Warfare, 8