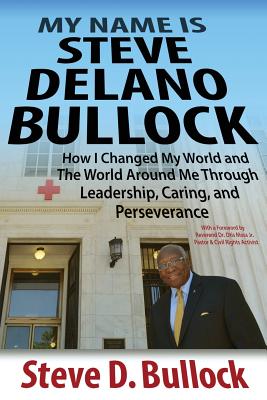 My Name is Steve Delano Bullock: How I Changed My World and The World Around Me Through Leadership, Caring, and Perseverance

Steve D. Bullock spent 38 years with the American Red Cross, culminating with his appointment as Acting President following the departure of Elizabeth Dole.

Steve D. Bullock spent 38 years with the American Red Cross, culminating with his appointment as Acting President following the departure of Elizabeth Dole. Prior to serving as Acting President of the national organization, he was the Chief Executive Officer of the Greater Cleveland Chapter of the American Red Cross. Under his leadership, the Greater Cleveland Chapter grew to become one of the nation's largest and most successful Red Cross chapters.

Before leading the Greater Cleveland Chapter, Mr. Bullock served as Executive Director of the St. Paul Minnesota Chapter and worked for the national organization in a variety of capacities.

In addition to his professional work, Mr. Bullock has served on numerous Boards of Trustees, in both the nonprofit and business sectors. He served on the Board of Education of the Cleveland Heights-University Heights City School District (president in 1991), as co-chairman of the Operation Desert Storm Homecoming Committee appointed by Mayor White, the Board of Trustees, New Cleveland Campaign, chaired the Marketing Cleveland-to-Clevelanders Committee, and was Chairman, Mandel Center for Nonprofit Organizations-Case Western Reserve University Executive Advisory Network.

Since 2002, Mr. Bullock has served as an Adjunct Instructor of Nonprofit Leadership at The Mandel Center for Nonprofit Organizations, Case Western Reserve University.

Mr. Bullock has been recognized many times for his outstanding leadership and service to the community. He received the Leadership in Nonprofit Management Award from the Mandel Center for Nonprofit Organizations and the American Red Cross Tiffany Award, the highest award bestowed on a Red Cross staff member. He has also received recognition for his commitment to diversity and education.

Mr. Bullock received an MBA from the College of St. Thomas in St. Paul Minnesota and a Bachelor of Arts degree from Virginia Union University. He has completed executive management programs at Northwestern University. He was awarded an Honorary Doctorate by Youngstown State University.